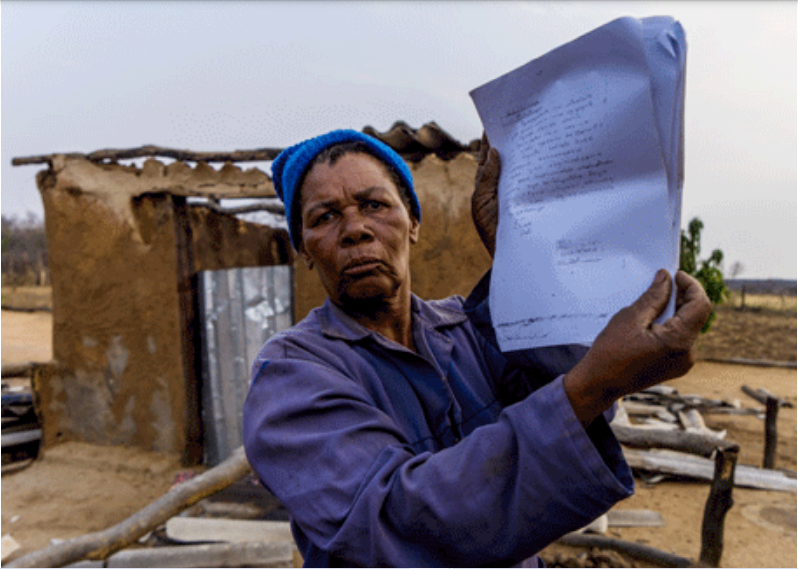 GOVERNMENT is consolidating and persisting with its unconstitutional and resultantly illegal policy of acquiring land from black individual farmers who bought farms and put them into full productive capacity, The NewsHawks has learnt.

Several indigenous landowners are effectively being forced to relinquish land for compensation and join the US$3.5 billion facility extended to white former commercial farmers, most of whom were violently displaced during the chaotic land reform programme since 2000.

Under Statutory Instrument 62 of 2020, the government is empowered to take over farms from indigenous farmers and compensate. Farmers are however doubtful of the government’s capacity to compensate them for compulsorily acquired land.

The government has so far written to some black farmers opening negotiations in the process.  Several farmers who spoke to The NewsHawks this week said talks were likely to reach a deadlock as they have lots of differences on several matters, including valuation.

In a letter to the affected individuals, the ministry of Lands, Agriculture, Fisheries, Water and Rural Development through its acting director of land management and administration, Cephas Magauze, said the government had already approved compensation to the affected farmers.

“Please be advised that your application has gone through all legal and administrative processes as guided and provided for by the Statutory Instrument. ln this regard, we hereby inform you that government has approved that you be paid compensation as provided for in the Land Acquisition Act (20:10),” the letter reads in part.

“For processing, contact our Valuation and Estates Section at Block 2 Makombe government complex.” But the farmers also said they were doubting the sincerity of the government, which is unlikely to have the money to pay compensation.

“The government has no money and needs money to spend on more pressing issues rather than to spend money on someone who doesn’t want it. They should just give me my farm back and use the money for other things. Why offer money when they need it for more pressing issues?”

Businessman and war veteran Fred Mutanda, whose farm is also being targeted, said the move was unconstitutional and said government officials must come clean on why the are targeting them.

“It is unconstitutional and the constitution is very clear that the government cannot take land from black Zimbabweans. lf they take it, they cannot take more than one farm and, if they are to do that, they have to compensate black farmers for improvement and the land,” Mutanda told The NewsHawks yesterday.

“We wonder whether our constitution is even followed by the government or to them it is just a document that is not applicable to the ordinary person.

“ln 2022, this shouldn’t be an issue. Government should just give black people their land. Blacks bought their land under the old constitution that afforded all of us property rights. We wonder why the government is fighting independent indigenous businesspeople. ls it that the government is afraid they will form a political party to challenge them or support a certain political party? “l am a war veteran myself and l fought for this country alongside some of the people in government, why betray them now?

“They must respect the constitution and why are they punishing the people? They are just scared as l said that we will use our money to support the opposition, but l don’t think that is the case. Look at people like Nyambirai, people like Vingirai, can they do such?”

Mutanda had joined the Young Lawyers Association of Zimbabwe in suing the government, the Judicial Service Commission, Attorney-General Prince Machaya and Malaba to fight the term extension which the courts ruled was illegal.

Other targeted personalities include Nicholas Vingirai, a top banker and former board member of ZB Financial Holdings Limited and the founder of Transnational Holdings Limited, businessman Afaras Gwaradzimba and banker Nyasha Makuvise.

Gwaradzimba refused to comment on the matter yesterday, saying he was yet to hear anything from the government.

“I will wait to hear from them. Now I have not heard anything,” he said curtly.

Nyambirai was not picking calls yesterday. Senior government and Zanu PF officials have been on a rampage, forcefully taking over indigenous-owned farms for resettlement.

Zanu PF secretary for administration Obert Mpofu is embroiled in a fierce fight with owners of Esidakeni Farm, located about 67km from Bulawayo, with dozens of workers having lost their jobs after he reportedly locked the property and set armed guards on them.

“His response was they are in progress and mentioned a figure of around 20 or 30 that were being processed. In reality, he was telling untruths because, as of today, there is not even one indigenous farmer who has been given his farm back,” Markham said.

“Another thing is if an indigenous farmer is given his farm back, then what? He has a farm that has been given an offer letter to other people and he is going to get the other people off the farm. Once those beneficiaries are off the farm, how are they going to farm? 99% of the infrastructure is dilapidated and the indigenous farmer has been totally subjected to a process where he has lost everything that he had.

“What happens to the farm workers? Where do they go? The government must explain, therefore, to say why did they take a farm from an indigenous farmer. “With elections coming up now, the government is paralysed and doing nothing.”

Last year, the Land Commission urged the government to compensate some farm owners whose land was irregularly acquired despite the farms being owned by indigenous farmers.

The government is not only seizing land from prominent indigenous black farmers but is also taking over communal land, including the Chilonga area of Chiredzi in Masvingo province.

They have also grabbed communal land in Chipinge, Matopo, Beitbridge and other areas where the government is now at loggerheads with local communities.