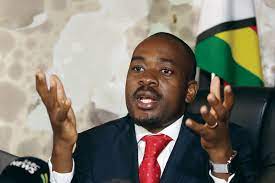 PRESIDENT Emmerson Mnangagwa is being haunted by the 2018 legitimacy crisis that has seen the economy imploding and plunging the country into chaos, opposition Citizens’ Coalition for Change leader Nelson Chamisa has said.

Chamisa, who is on a countrywide tour to interact with party structures, said life has become difficult for Zimbabweans across the country because of policy inconsistency and noise in the cockpit as exhibited by Mnangagwa’s “usurpation” of central bank governor John Mangudya’s powers to announce key pronouncements relating to monetary issues.

“There is no money in the banks, banks have been banned from lending, yet it is one of the main reasons they exist. Let us deal with the confidence issue, micro-economic stability issues. There is lack of confidence because of policy inconsistency, policy instability and policy noise in the cockpit. You can’t have a president announcing measures ordinarily announced by the central bank,” the former Information Communication Technology minister said.

“We can’t have the central bank governor’s powers usurped by a president who acts as if he doesn’t know his role. General policy arrogance, not listening to stakeholders like the Zimbabwe National Chamber of Commerce (ZNCC), bankers and others who gave sound advice and suggestions is problematic.

“Policymaking must be consensual and broad-based. Listen to the cries of business, labour, students and the citizens on issues they want addressed,” he said.

Last weekend, Mnangagwa announced a raft of measures meant to halt the slide of the beleaguered Zimbabwe dollar, including stopping banks from lending, which analysts described as ill-advised.

Mnangagwa, who has repeatedly claimed that saboteurs are determined to make the economy scream and justify a regime change agenda, blames banks for flooding the financial system with excess funds, fueling the currency slide and inflation.

“The way forward is for the country to change direction and choose leadership that is fit for purpose. There is no confidence in the current national stewards,” Chamisa said.

“People will continue to scream and freak out until the situation is right. Even civil servants are screaming and freaking out. Is that the Zimbabwe we want?”

Chamisa said salaries have been eroded, inflation is sky-rocketing while prices are already wreaking havoc, all indicating serious economic trouble.

“What we need is to fix the country, restoring confidence and finding a political solution. That is why I am calling for the pre-election pact on reforms (Prepare) ahead of the 2023 elections so that we don’t have a disputed election.”

“Zimbabwe is the only country in Africa, if not globally, where an election process is not agreed on. That is why it has a disputed outcome. We need frameworks; ours is problematic because there is no agreement on the nature of the election and, even by its own admission, that is why Zanu PF called for the Political Actors’ Dialogue (Polad) platform, which is a wrong answer for a good question. The answer is a legitimate platform for engagement.”

“Those in government are engineers of chaos. The economic sabotage is authored in government. That is where it is produced. It is a leadership crisis and Zimbabwe has been in this predicament for over two decades, but it is fundamentally a governance issue, a leadership problem.”

“Our country doesn’t have a leader and that is the bigger problem. We are looking for a unifier, a leader, a peacemaker and, if you look at all these things, they are not present in the man occupying the office of the President.”