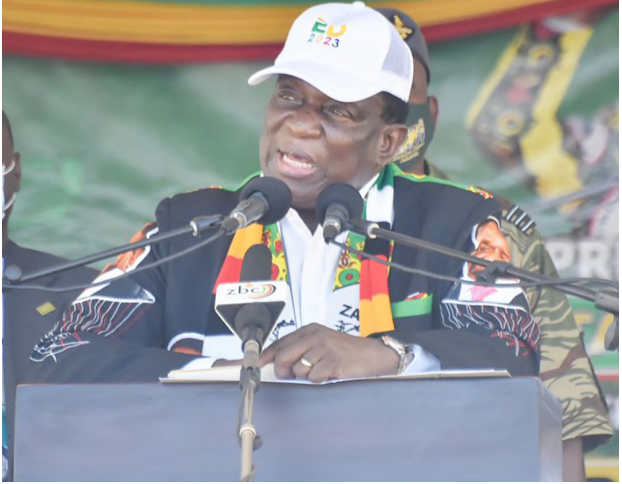 PRESIDENT Emmerson Mnangagwa and his deputy Constantino Chiwenga now have a record of using hate speech and genocidal language which incites violence against the opposition. In the 1980s, Mnangagwa called Zapu supporters “cockroaches”, while Chiwenga called the Citizens’ Convergence for Change “lice” to be crushed.

“I have heard others here saying down with triple C, let me assure you that there is noth[1]ing that it can achieve, you see how we crush lice with a stone,” Chiwenga said.

“You put it on a flat stone and then flatten it to the extent that even flies will not make a meal out of it.”

On 5 March 1983 at a rally in Victoria Falls, amid genocidal Gukurahundi massacres, Mnangagwa issued a chilling threat against Zapu using language that would be echoed 11 years later by perpetrators of the Rwandan genocide in which Hutu extremists killed nearly one million Tutsis.

As the state-controlled Chronicle reported at the time: “Likening the dissidents to cock[1]oaches and bugs, the minister (Mnangagwa) said that the bandit menace had reached such epidemic proportion that the government had to bring ‘DDT’ [pesticide] to get rid of the bandits.

Gukurahundi was engineered by the late former president Robert Mugabe and his Zanu PF cabal. Mnangagwa is accused of being the enforcer of the genocide, while Chiwenga was commander of 1 Infantry Brigade at Khumalo Barracks in Bulawayo, which provided logistics for the killings.

Mnangagwa’s analogy was clearly and perfectly comprehensible to his audience. The cockroaches and bugs were supporters of founding nationalist leader Joshua Nkomo’s main opposition Zapu and, generally, the Ndebele ethnic group which Mnangagwa and Zanu PF leaders sought to exterminate.

The DDT “pesticide” to kill Zapu supporters was in the form of the Fifth Brigade, the murderous North Korean-trained army unit that had already begun a fierce crackdown in Matabeleland and the Midlands, home to most of Zimbabwe’s Ndebele-speaking population.

By the time Mugabe’s campaign of violence, murder and destruction ended, from 1982- 87, about 20 000 people had been killed. This figure has also been cited by the International Association of Genocide Scholars, although the death toll is almost impossible to verify accurately.

The CCC forerunner, MDC, also lost hundreds of supporters to Mugabe and Mnangagwa’s brutality. Zanu PF has since 1980 used violence and murder as a tool to gain, consolidate and retain power despite dismally failing to govern the country now reduced to a political and economic fiasco.

Given the violence and killings that hate speech has incited, Zimbabwean leaders should be held accountable for their inflammatory actions and remarks. A law against hate speech needs to be enacted to stop the politics of violence and murder rife in the toxic body politic.

Hate speech covers many forms of expressions which advocate, incite, promote or justify hatred, violence and discrimination against a person or group of persons — in this case Zimbabwean opposition political parties — for a variety of reasons.

Hate language poses grave dangers for the cohesion of a democratic and free society, protection of human rights and the rule of law. If left unchecked, it can lead to acts of violence and conflict on a wide scale as it is an extreme form of intolerance, as has been the case in Zimbabwe. In 1992, Leon Mugesera, a senior politician in Rwanda’s then ruling Hutu-controlled party, told a huge crowd at a rally in Kabaya that minority Tutsis were “cockroaches” who should go back to Ethiopia where they came from.

That contributed to fanning hate and genocide. Mugesera was later jailed for life in Rwanda for describing Tutsis as “cockroaches” and calling for their extermination after losing a court bid to avoid extradition back home from Canada. — STAFF WRITER.