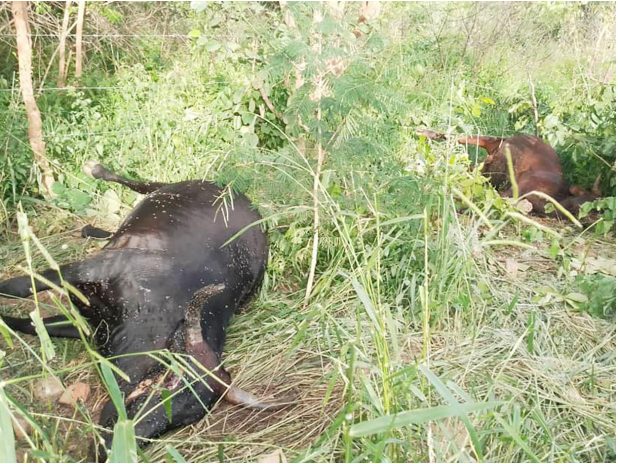 THE Environmental Management Agency (Ema) has sanctioned three mines for polluting the Angwa River, a major water source in Mashonaland West province and a tributary of the Zambezi River.

The pollution has resulted in villagers falling ill, as well as the death of aquatic life, including fish. Domestic animals have also been affected. De-Troop Jiangxi Risheng, Morocco 7 Mine and Take 25 mines were slapped with fines for spilling cyanide into the river, among other offences.

‘‘Ema swiftly responded and did compliance inspections at Morocco 7 Mine, De Troop Mine Jiangxi Risheng Mine and Take 25 Mine. From the compliance inspections conducted, we noted environmental violations in the handling of cyanide, which is a highly toxic hazardous substance; discharge of mining effluent and the absence of spillage contingency strategies. We served environmental protection orders on the said mines, directing them to adopt appropriate measures to avoid the recurrence of such challenges,’’ Nhariswa said.

‘‘We shall continuously work with other stake[1]holders and law enforcement agencies to bring to finality these pollution issues along Angwa River.’’ De-Troop is situated about 170 kilometres north-west of Harare under Chief Magonde in Makonde district along the Angwa River and run by China’s Jiangxi Risheng Mining Company.

Morocco Mine is located at Kuti Farm, adjacent to the De-Troop mining claim. “On site (at Morocco Mine) there was Dennis Mazhenda, who is the plant supervisor for the mine. The project proponent was operating with[1]out an environmental impact assessment certificate as required in terms of section 97 of the Environmental Management Act (Chapter 20:27).

It was also noted during the inspection that the proponent was in possession of 100kgs of cyanide and the cyanidation tanks were constructed using plastic material which exposes the surrounding area and people to danger contamination in case of an incidental spillage.

The project proponent was served with an environmental protection order in terms section 37 of Environmental Management Act (Chapter 20:27) to cease operations pending de-contamination of all the areas which were affected by some chemicals spills at the mine, and commission an EIA (environmental impact assessment) report which should be submitted to Ema for approval before commencement of any works,’’ Nhariswa said.

‘‘De-Troop had its slimes dam failure which occurred around 0300hrs on the 17th of February 2022, resulting in the discharge of slimes into Angwa River and leading to fish deaths in the river. ‘‘The cut-off trenches along the mine were no longer being maintained, leading to overflow of slimes into the river and there was indeed a slow reaction by the team manning the slimes dam, resulting in slimes contamination in the nearby river. The miner did not have an emergency spill response strategy, nor did it have the required ferrous sulphate to de-contaminate the affected area. The resilient catfish was not spared due to the contaminated water that led to poisoning of the fish species in the river,’’ explained Nhariswa.

‘‘Also at De-Troop, the project proponent was served with an environmental protection order in terms section 37 of Environmental Management Act (Chapter 20:27) to ensure continuous monitoring and de-contamination, including engagement of locals and downstream communities,’’ Nhariswa said. The miner was ordered to put in place “mechanisms to ensure compliance” with approved engineering designs of the tailings storage facility and ensure adequate monitoring mechanisms of the tailings storage facility.

‘‘The miner was also ordered to submit progress report on de-contamination and engagements with the local community. In addition to the above-mentioned orders, the Ema took a preventative approach by de-contamination of three points along the affected river.

“Take 25 Mine was not fenced at all, leading to three cows straying into the mine’s carbon rooms which had an open access point.

The NewsHawks has established that villagers have been losing livestock as a result of the contamination.

‘‘We have endured such losses annually since early 2015 when the Chinese kicked off mining at De-Troop mine along Angwa River. It has affected mostly communal farmers settled along the river for substance farming. Although some of the farmers are also into gold panning, livestock, in[1]cluding cattle, goats and sheep, have been part of their economic security,’’ said Regerai Mukanga from Hurungwe’s Chikuti village.

A local teacher who refused to be named on professional grounds added his voice, saying disaster struck the areas along the Angwa River around mid-February.

‘‘We have disaster in Makonde district after some slime dams at De-Troop mine owned by a Chinese gold mining company was swept by heavy rainfall, taking hydrogen cyanide into Angwa River. This has affected the livelihoods of communities after some cattle, goats were affected,’’ he said.

‘‘People have not been spared, some have reported to Mutala Clinic for help over suspected poisoning resulting in diarrhoea,’’ the teacher added. There was no immediate official comment from the provincial medical director on  the affected communities at the time of writing.