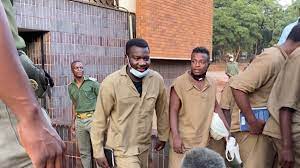 FRANTZ Fanon in his seminal and immortal text The Wretched of The Earth prophetically and provocatively said that “each generation must out of relative obscurity, discover its mission, fulfill it or betray it”.

At that moment, Fanon was throwing down a generational gauntlet at the height of anti-colonial struggles in Africa and the rest of the colonised world. However, this prophetic text has become transcendental and inter-generational.

As such, it has become a reference and rallying point for the youths in post-colonial Africa to derive ideological satnav and radical thought process in their quest to chart their own generational political course and mandate.

In Zimbabwe, Makomborero Haruzivishe, an MDC-Alliance cadre and activist who has been widely considered the latest prisoner of conscience, is the apt metaphor of the generation that is fulfilling its generational mission.

This demands us to locate and contextualise the political, generational and demographic significance of him within the increasingly tyrannised and Talibanised political environment in Zimbabwe.

This is especially relevant against the backdrop of his much-delayed release from remand prison due to refusal of bail.

Optics of a heavily armed police presence juxtaposed with the large fanatical support base that greeted him during his release from Harare Remand Prison after the granting of bail by the High Court show the significance of the political dynamics currently prevailing in Zimbabwe.

Over the last three years, the youths of Zimbabwe have to a greater degree been controversially classified and critiqued as the “unfocused youths”.

This is due to the fact that demographically they are the largest population group which possesses so much untapped political capital and clout. Coupled with the fact that youth have been historically considered the vanguard of the revolution, the current youth’s lethargy is thus an issue of major political interest and concern.

Suffice to say, the Zimbabwean youths as a demographic block have largely been de-politicised, immobilised, and disengaged from the democratic, political, and civic struggles of the local polity.

This pejorative term of unfocused youths has largely been put into glaring focus through the way they gravitate towards the politically bankrupt and ideologically shallow socialites, who are affectionately referred to as “mb ingas” in street lingo.

This cast of wrong role models includes characters like Passion Java, Ubert Angel and others being used by the ruling elites to mobilise youths to support those who have actually stolen their future. It is only in countries like Zimbabwe where the youths would sing praises and songs for those who have stolen their future and condemned them to perpetual poverty and misery.

This is where the politically and civically engaged youths such as Haruzivishe bring a breath of revolutionary and radical fresh air. That is why the Zanu PF establishment is doing all it could to break the spirit of such youths or compromise with promises of freedom from jail or good life if they abandon the struggle.

The system is clearly rattled by Haruzivishe who has proven to be unafraid, strong and resolute. The radical and risk-taking political and practical consciousness of Haruzivishe has inadvertently put him on a collision course with the repressive and paranoid Zanu PF authoritarian state apparatus, which will try to crush him or coopt him since he is considered a thorn in the flesh for merely exercising his democratic and constitutional rights.

The selfless nature of Haruzivishe’s organic democratic resistance, organising and mobilising zeal, coupled with his willingness to challenge injustice, repression and violation of human rights whenever they rear their ugly heads, put him on a pedestal of the democratic struggle, as his actions can be a catalyst and heartbeat of further resistance to radicalise, politicise and conscientise the largely docile youths.

Prior to his release from remand prison on 8 January 2022, Haruzivishe had served an unlawful prison sentence of 10 months and 22 days. The the manner in which he was released from remand prison has national significance in the political and democratic struggles of Zimbabwe.

Looking at the optics that accompanied his delayed respite from political persecution within the dingy prison walls is quite revelatory and insightful.

The heavily armed police presence clearly showed that Haruzivishe possesses and carries ideas and thought processes that strike fear at the heart of the autocratic and repressive power structure of the Zanu PF government.

The system is not fighting an individual, but rather the ideas and the potential of that vessel or carrier of those ideas in terms of politicising, conscientising and mobilising the youths who, if they stand up for their rights or exercise the vote, can bring change in Zimbabwe is one fell swoop.

This was put into perspective with video footage of interviews he made upon his release. Haruzivishe, far from being physically, mentally and politically broken by prison, came out as re-invigorated and re-energised to continue with his generational mandate.

He spoke in revolutionary fashion about how the struggle against tyranny and dictatorship is not an easy road.  He indicated that there is an ultimate price that inevitability had to be paid and that the inevitable dangers of the process come with the territory.

This comes from Steve Biko’s political thought process, that a struggle without casualties is not worth its salt. Moreover, the heavy police presence betrays a regime which is paranoid and insecure, which is further afraid of a politically engaged youth with a clear ideological and political clarity on matters relating to governance, upholding of the constitution and human rights, as well as their basic needs and economic prosperity.

The scenes and optics from remand prison were reminiscent of the way anti-colonial nationalists and anti-apartheid stalwarts were treated by colonial and apartheid regimes upon their release from prison.

If both Ian Douglas Smith and PW Botha had woken up from their graves on that particular Saturday morning, they would have been mistaken in believing that they are both in apartheid Rhodesia and South Africa respectively.

The only difference being that it is black people instead of white people acting as the shock troops of repression. Thus it is black-on-black repression; the purported liberators have metamorphosed into Frankenstein autocrats.

The flip side of the unforgettable optics of that Saturday morning at remand prison, the polar opposite of the heavily armed police presence, was the jubilant, vociferous crowd of friends, relatives and opposition supporters who had braved the wet weather and possibly the intimidating threat of the police to welcome and embrace their comrade, leader and friend.

This clearly points to the progressive cause that Harizivishe is fighting, thus the contagious and infectious resonance of his cause within the democratic opposition community created an enigmatic larger-than-life personality clout around him.

However, despite the phalanx of adoring supporters and comrades, the clear humility, discipline, and ordinariness in his personality was quite remarkable and humbling.

It projected an image of a man of the people; a fearless youth leader whose prototype is needed to free Zimbabwe from the protracted tyranny of former liberators.

When he referenced and acknowledged political and democratic martyrs like Itai Dzamara, a journalist-turned-activist who was abducted seven years ago, it showed a young man who was cognisant of Karl Max’s ideological analytical prism of that “men make their own history, but they do not make it as they please; they do not make it under self-selected circumstances, but under circumstances existing already, given and transmitted from the past.”

Furthermore, by invoking the name of Dzamara he is reminding us that freedom has never been free and ultimately striving for freedom and democracy under a repressive regime comes with mortal dangers and casualties.

Zimbabweans have to understand that there can be no freedom without sacrifice.

Rebranding is a matter of life and death for MDC-Alliance

Omicron variant is here: We either get scared, hide or act