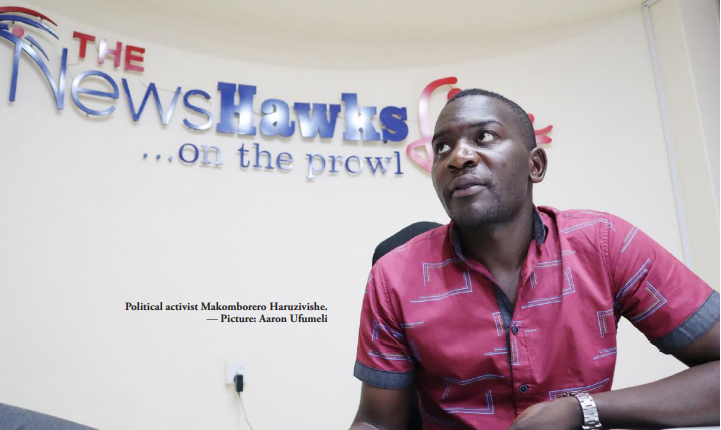 WHEN political activist Makomborero Haruzivishe stepped into Chikurubi Maximum Security Prison more than 10 months ago, he knew his bid for freedom would be an arduous journey.

Convicted in April last year, Haruzivishe was jailed for an effective 14 months on a case of inciting public violence and resisting arrest.

In July last year, he secured bail pending appeal in that matter, but the earlier bail revocation in the Impala Car Rental case in which he is accused of locking in the firm’s employees demanding that the company release information on Tawanda Muchehiwa’s abductors — which is still pending — kept him in jail.

Securing his freedom, Justice Cathrine Mzawazi of the Harare High Court quashed a decision by a magistrate to revoke Haruzivishe’s bail in March last year after Haruzivishe skipped a court appearance in a matter involving Impala Car Rental.

Recounting his days inside Zimbabwe’s dreary high-walled maximum prison, which houses the most dangerous criminals, Haruzivishe recalled the short days and long nights of what seemed to be an unending nightmare.

With raw sewer flowing daily inside the overcrowded prison cells, Haruzivishe is grateful to come out healthy.

“The situation as it is now in prison is overcrowded. In the D Class section where I was, we were supposed to be 300 maximum, but we were now 750 as of the day I came out. Imagine the strain on sleeping, the ablution facilities. The ablution facilities are too outdated. We were in a permanent state of sewer. The sewage smell was the default smell inside cells,” Haruzivishe told The NewsHawks.

Haruzivishe also recounted how water had become a scarce commodity inside prison, describing washing hands as a “luxury”.

“Water was a hassle, washing hands became a luxury during the last days of my stay.”

With over 700 prisoners crammed in the cells, Haruzivishe explains how securing a seat in the toilet was a “hassle”.

While in prison, a legal battle was bruising outside, with his lawyers working frantically to secure his freedom.

A #FreeMako campaign went on for months online, as his compatriots sought to pile pressure on President Emmerson Mnangagwa’s regime to release him. His case was also mentioned in the British House of Lords, as the peers maintained that Zimbabwe’s “new dispensation” had continued to clamp down on political freedoms.

“I knew I had committed no crime. I knew I was innocent and I knew I had been convicted because of what I stand for. What had been convicted was not me but my ideals of a better Zimbabwe. Of course, it was emotional for me but the emotions quickly turned into energy, energy to be able to endure, be like a comrade and if it meant serving that sentence safely and come back stronger mentally, let it be so. And I am glad I came back stronger. All I know is that it was the beginning or the continuation of a bigger fight that was started long back in a people’s revolution initiated years ago,” Haruzivishe said.

As the Covid-19 pandemic raged, Haruzivishe found himself with no visitors.
He also accused prison officers of working in cahoots with the state to deny him visitors even after the lockdown rules were relaxed.

“There was a point when visitors were completely shut out due to the Covid-19 pandemic but there was a period where my visitors were being barred and included some of the critical visitors like my co-accused, Joana Mamombe. She was being barred for no reason because she was the one taking care of my business outside. She was also coordinating my legal strategy,” he said.

“Denying her from coming was a violation of my rights. I however understood that I was surviving beyond enemy lines so I did not expect it to be easy.”

To keep himself occupied during the day, Haruzivishe spent his time reading books and exercising.

“I read a lot of books and also did exercises to make sure that I am fit. Inside, there are not only risks of contracting Covid-19, but other diseases.”
Along with other prisoners, Haruzivishe founded a football club which went on to win a tournament.

“When I was convicted, along with other prisoners, we formed a football club which won a cup in the just-ended season. It is called Harare Stars.”

Using his knowledge of the law, the young activist provided legal advice to fellow prisoners who eventually got discharged.

“I also took the opportunity to assist others by being a “bush lawyer”, helping others do bail applications, appeals. It is something that occupied my time and it positively impacted other prisoners. It was an honour to use my knowledge to help someone get their freedom. There are many wrongly accused who are in prison. Due to a justice system in shambles, they are still locked up.

Haruzivishe, who also aspires for political office in the future, started his activism at Gokomere High School, where he held his first demonstration against the rising cost of education.

“I did my first demonstration in 2008 at Gokomere High school. It was in the middle of an economic crisis, a deep political crisis. We also felt the impact down there in Masvingo and felt the need to rise up and demand better.”

After enduring more than nine months in prison, two weeks ago Haruzivishe, the student leader-turned-political activist, walked out of the Chikurubi Prison to a hero’s welcome and wild cheers.