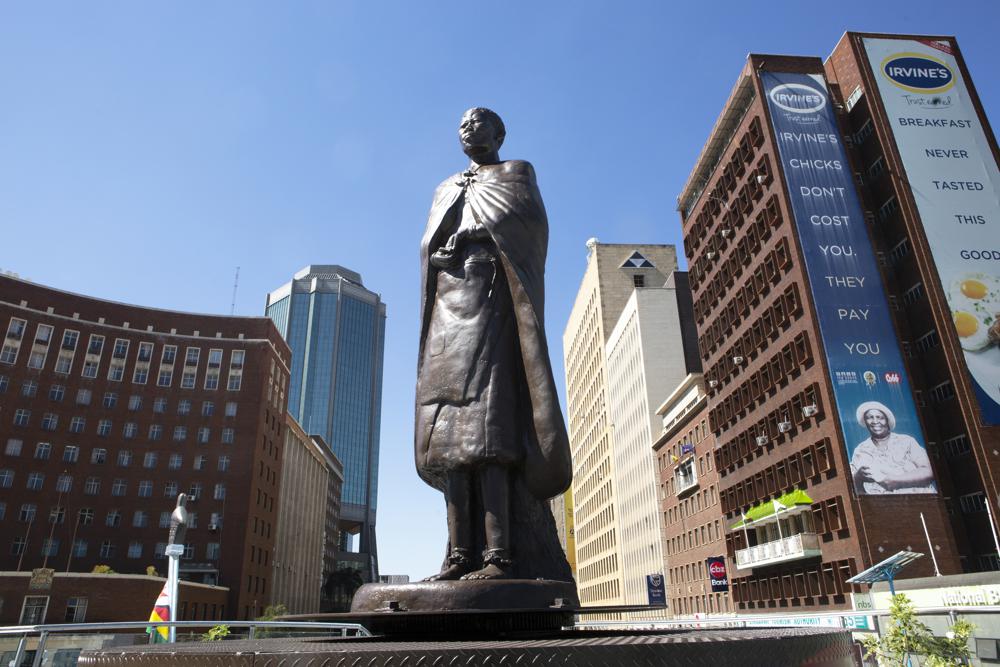 PRESIDENT Emmerson Mnangagwa this week officially unveiled the statue of Mbuya Nehanda at the intersection of Samora Machel Avenue and Julius Nyerere Way in Harare amid pomp and fanfare — speeches, music, dance, rhetoric and parading.

OWEN GAGARE
The statue symbolically marks a convergence of revolutionaries — Nehanda, Machel and Nyerere. It stands elevated on a steel bridge above an intersection where two main roads named after some of Africa’s greatest liberation struggle luminaries meet.

Nehanda’s statue captures history, culture and memory rolled around a struggle for freedom, democracy and progress that culminated in Independence in 1980 – after 90 years of colonial rule.

Among other prominent royal, military and spiritual leaders of the time, Nehanda was one of the heroines of the 1896 uprising against colonial settlers.

The causes of the revolt included a complex web of grievances, including dispossession, repression, land, cattle and taxes.

After the 1893 Anglo-Ndebele War, three years after colonial invasion, which marked the first militant fightback to occupation as General Mtshana Khumalo and his Imbizo crack regiment annihilated the Wilson Patrol at the Battle of Pupu in Lupane, Matabeleland North, in December that year, Nehanda rises to prominence in 1896.

This followed King Lobengula’s pitched battles and flight after the attack on Bulawayo.

Faced with a deadly onslaught as well as a simultaneous invasion by British imperial forces from the south, Lobengula, who had been duped and trapped by colonial plotters before 1890 through dubious negotiations, agreements and deceit, burnt his capital, Bulawayo, annihilated a column of invaders sent to capture him, and disappeared.

The 1896 uprising started on 20 March in Matabeleland instigated by Mlimo, a spiritual leader from Matopo, and led by Ndebele Queen Regent Lozikeyi Dlodlo who had taken charge after Lobengula’s disappearance. She was Lobengula’s senior wife.

Lozikeyi, the inspiration behind Impi Yehloka Elibomvu (Ndebele for War of the Red Axe), came from a family of traditional healers and, together with many chiefs from the Khumalo, Ndiweni, Masuku, Mkhwanazi, Mafu, Gwebu, Mabhena, Mathema, Sithole and Dlodlo clans, among others, military commanders and spiritual leaders, rebuilt the Ndebele forces to fight again in the 1896 uprising.

She worked with Lobengula’s successor, Nyamande Khumalo, who came in on 25 June 1896.

As a result, Mnangagwa last year during a Heroes’ Day virtual address honoured Nehanda, together with Lozikeyi, Mtshana Khumalo and another decorated Lobengula commander, Mgandane Dlodlo.

Just like Mlimo, Lozikeyi is one of the unsung heroines of the 1896 uprising. There are many other figures and fighters who are less spoken about.

Interestingly, it was the late vocal Chief Vezi Maduna Mafu’s grandfather, Maduna Mafu, head of the Godlwayo regiment, which was stationed in today’s Insiza district after founding Ndebele King Mzilikazi migrated from Zululand north into present-day south-western Zimbabwe, who initiated the attacks on settlers.

Chief Vezi Maduna Mafu, who died in February, was critical of the late president Robert Mugabe and Mnangagwa.
In 2018, he wrote Mnangagwa a letter raising a series of critical issues affecting his communities.

Following brutal violence and dispossession of land and cattle in the aftermath of the British South Africa Company (BSAC) or the Charter Company’s Matabeleland invasion in September 1893, it was Maduna Mafu and his brother who launched the first attacks on invaders in 1896. After initial military successes, the tide turned, with far-reaching consequences.

When the revolt spread to Mashonaland starting 14 June 1896, Nehanda and other spiritual leaders like Sekuru Kaguvi, Mkwati and Chaminuka rose to the occasion.

These figures were not royal or military leaders, but spirit mediums who used traditional cultural symbols and African religious cult to mobilise people and confront colonial authorities who had brought rapid socio-cultural, economic and political changes, as well as attendant disruptions to native people’s lives.

Prior to that, British colonial empire-builder Cecil John Rhodes had in July 1890 invaded Zimbabwe from South Africa using Botswana as a base through the Pioneer Column which encroached via Fort Tuli near Tuli village on the eastern bank of Shashe River in Beitbridge District — going all the way to Fort Victoria (Masvingo), Fort Charter (Chivhu) and eventually Salisbury (Harare) — initially avoiding Matabeleland as it feared the Ndebele State — before plotting its final assault on Bulawayo from Harare three years later.

Even though Nehanda had neither huge standing nor structured army, and no intelligence network, she bravely mobilised people in Mashonaland to revolt using her power and influence as a spirit medium. She also coordinated with spirit mediums elsewhere to spread the revolt and instigate attacks on settlers.

At the end of the revolt, Nehanda was arrested with Kaguvi in 1897 for allegedly murdering Native Commissioner Henry Hawkins Pollard. They were hanged in April 1898.

Nehanda’s legacy continued to be linked to the theme of resistance, particularly during the liberation struggle mainly on the part of Zanu and Zanla. Her name became increasingly important to the nationalist movement in Zimbabwe.
On Tuesday this week, the unveiling of Nehanda’s statue coincided with the Africa Day commemorations under the theme “The Arts, Culture and Heritage: Levers For Building The Africa We Want”.

Speaking at the ceremony, Mnangagwa said the statue is a symbol of history, fortitude and patriotism.

Watermeyer and Nehanda’s trial
Like the other Rhodesian judges, Justice John Philip Watermeyer was born in Cape Town, South Africa. His father was a judge on the Cape bench for many years.

Watermeyer, like Justice Joseph Vintcent, studied law at Cambridge and was called to the English Bar in 1885. He then went to Cape Town, got admitted and commenced practice as an advocate.

On 30 July 1896, Watermeyer was appointed by the BSAC to be the second High Court judge. He was a close friend of the administrator William Milton.

By High Commissioner’s Notice No.20 of 29 December 1898, the High Court of Southern Rhodesia was declared “open from and after the first day of January 1899.”

So Vintcent was based in Bulawayo, while Watermeyer was based in Harare at Jameson House at the turn of the 19th century where he sentenced Nehanda to death.

Nehanda, Kaguvi, Mashonganyika and others were brought to trial on 2 March 1898. Kaguvi and Nehanda were tried by Watermeyer and three assessors. History books indicate that they were in fact represented by counsel.
Kaguvi was charged with the murder of an African policeman on 20 June 1896, six days after the uprising started in Mashonaland. Nehanda and three others were charged with the murder of Pollard.

Nehanda, Kaguvi, Mashonganyika and others were sentenced to death for their role in the 1896-7 rebellion. They were executed on 27 April 1898.

While in the early years, the Cape administration wanted to slow down rushed justice, their minds changed when a rebellion became an existential threat to themselves, their political interest and the colony itself.
From the Cape, Milner wanted the local administrator Grey to expedite the trials so that Nehanda and Kaguvi could serve as examples.

He wrote to Grey: “Get the murderers tried as soon as you can. It would be better to deal with fifty percent promptly than to wait a year longer to bag the whole lot. It is the deterrent effect of strong punishment which I look to. And try first the ones in whose cases you have the surest evidence.”

It was very important for the British Crown to show that it would not tolerate rebellion that threatened its hold on its colonies.

But Grey refused to be hurried and allowed the police and the courts to proceed at their own rate.

At trial, their counsel, correctly, argued in their defence that the country was in a state of war.
Of course, this defence was conveniently dismissed by the court because it had serious legal and political repercussions for the colonial administration and conquest.

Several witnesses testified against them and others testified for them. However, both were convicted and sentenced to death.

He believes that she may have been wrongly convicted. It is evident that the colonial administration was desperate to suppress this uprising and would pervert justice if necessary to achieve their ends.

Fr Richartz then baptised him and gave him the name of the good thief named Dismas and says: “with whom he was to share the great blessing of forgiveness in the hour of death…”

Dismas is the name of the thief who is said to have said to Jesus on the cross after rebuking the other thief who mocked Jesus: “Remember me in paradise.”

Nehanda was defiant to the end. It is recorded that Fr Richartz was given the task of informing the prisoners that they would be hanged on the next day, that is 27 April 1898. Kaguvi showed fear and began to cry.

Kaguvi’s father-in-law Mashonganyika and Mzampi took the news quietly. Nehanda began to dance, to laugh and talk so much that warders were obliged to tie her hands and watch her continually as she threatened to kill herself.
On the day of execution, Fr Richartz tried again to talk to Nehanda about religion, but she refused, called for her people and wanted to go back to her Mazowe and die there.

The screaming and resistance of Nehanda as she was being taken up the scaffold to be hanged deeply disturbed Kaguvi who was going to be next. He was being held nearby and heard even the noisy opening of the trap-door and the heavy thud with which she fell to die. It was traumatic.

After the execution of Nehanda and Kaguvi, their bodies were buried in a secret place lest the natives could take away the bodies and claim that their spirits had descended on any other prophetess.

To this day, prisons maintain this practice of hiding bodies of executed prisoners. Relatives of condemned prisoners are denied the bodies, which are buried in unmarked graves.