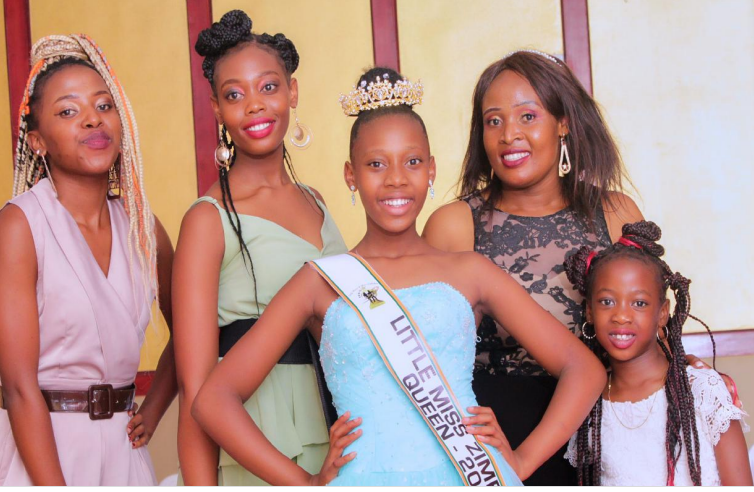 SHE has an aura about her, you cannot miss it. From the moment she took to the stage, young Ashley Rutsvara had everyone eating out of her palms.

She rocked the judges as well as the audience with her well-choreographed Nyau dances.

And the highlight of her performance was when she removed the Nyau mask, convincing everyone that hers was a combination of beauty and talent.

The title was hers to lose, and Ashley did not disappoint. The 12-year-old simply pulled the rug from beneath the feet of other 35 contestants to land the Little Miss Zimbabwe crown held early this month at Long Cheng Mall in Harare.

“I think it is just natural, although I know my strength is in confidence and my smile,” she told The NewsHawks this week.

“My aim is to purse runway modelling, although I have a passion for interior and fashion design. When I performed as a Nyau dancer, it made me stand out and most people enjoyed the performance, not least because I was confident. The energy and the costume also stood out. I would learn Nyau dances by just watching videos.”

The Nyau costume, designed by Winnie Mashita of TinaCra Fashion, was not only colourful but also a gem. It resonated well with the Nyau culture where the dancers drap themselves in ripped fabrics that bring out different textures and colours.

Obviously not new to winning, Ashley’s first attempt at modelling was when she was only four.

“I remember it was in 2014 when I was at crèche and I participated in Miss Vantal and it was mandatory to participate. I was happy to win the title and in 2019 I took part in Miss Pre-Teen Zimbabwe Junior and I won the crown. I also won other titles, Miss Talent and Miss Neatness, in the same year,” she explained.

Away from the runway, Ashely had a cameo role in Jah Prayzah’s music video titled Mwana Wamambo, Edgars stores billboards and has also done work for Population Services Harare.

With all these achievements on her crown, Ashley wants to pursue a career in runway modelling. She is dreaming big and, having tasted success so early in her career, trust her to realise her dream. She is now going for the big one.

“But first, I want to win the Miss Zimbabwe, then Miss World and Miss Universe because these are some of the prestigious titles,” she said.

She lists the likes of Maddie Ziegler, Gigi Hadid and Kendall Jenner as her role models. Her mother Florence Karim (38), a nurse by profession, said Ashely’s modelling career path was taking shape because of firm family support systems.

“She’s the first child in the family of three daughters to do modelling but everyone, including her dad, is supportive of her passion,” she commented.

“She is also doing well in school. Last term she came out with seven units. She is balancing both school and modelling well.”

Her sisters, Alpha and Kimberly, also enjoy it when Ashley brings titles home.

“For some reason, I am a proud mother because we are now like sisters. We have mature conversations with Ashely at home and the rest of the girls, especially during cooking time,” she said.

Ashley is doing Grade 7 at Prospect Primary School where her two friends, Chido Chirumunda and Faith Madigo, are some of her biggest supporters.

So if Ashley goes on to become a world-acclaimed model, people will know where it comes from! The biggest encouragement comes from her mother who has had to brush off all the negativity and stereotypes associated with local modelling.

“As a family we put God first and also we have good support systems,” she said.

“I believe the girl child needs grooming and, once that is in place, then it means there is nothing wrong in supporting our children’s dreams in modelling. We are grateful as well to the guidance of My Image Consultants by Yuki for identifying and nurturing the young models. I also encourage parents to be supportive of their children in line with the school curriculum.” Asked what her motto was, Ashely simply said: “Believe in yourself and don’t let anybody bring you down and education is key!”

Vic Falls up in smoke as carnival begins