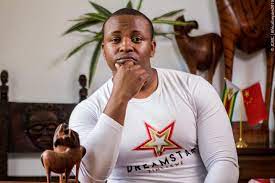 WHEN he first grabbed the limelight, many people thought he was a fluke. But much to their amusement, Nyasha David has made a huge splash on the mainstream music scene with his latest album Songs of David.

But one may ask: What makes Nyasha David stand out from his contemporaries? He says he is an “advocate of love” and his songs make people feel loved and fall in love. Recently, Nyasha David, whose real name is Nyasha David Dengwani, had music lovers eating out of his palms at the relaunch of Pegasus and Branson cigarettes in Harare.

While on stage, Nyasha David serenaded guests on a musical journey. Each song had an effect on the audience although he was just performing as a duo alongside a keyboardist.

The 31-year-old singer made his presence felt on and off the stage with a flawless delivery that even Ashleyn Mukamba, the head of sales and marketing at Pacific Cigarette Company, who was a presenter, enjoyed to the fullest.

The hugely talented Afro-pop singer comes from a musical family. His father Godfrey Dengwani was an acoustic performer in Libya and Mozambique, where he was training to be a pilot. And his uncle Tockson Banda played for the Rock Jazzers, a band from Malawi, in the late ’70s.

He also played with Marshall Munhumumwe  before he left for Malawi where he later changed his name from Misheck Dengwani to Tockson Banda. The Gweru-born star attended Widdecombe Primary School and Churchill Boy High for his Ordinary Level before enrolling at Nashville High School in Gweru to complete his Advanced Level.

His love for music began when he was at Churchill High School in Harare where he headlined “Culture Nights” at the institution and at sister school Roosevelt Girls High.

At the time, the dancing was more dominant than the singing which saw him also performing at high school gigs and variety shows.

Perhaps his school shaped his music career as he went to China in September 2015 to perform at the Chengdu Intangible Cultural Heritage Convention. In December 2015, he performed during Chinese President Xi Jinping’s state visit to Zimbabwe.

In 2018, Nyasha David also performed at the Dreamstar Zimbabwe Lanzhou China Tour. One of this most memorable moments was when he collaborated with reggae super group members Denroy and Gramps Morgan on a track tilted Missing You.

Since then, he has been staging live shows, including the Unplugged Zimbabwe concerts. He dropped his debut single in 2016 simply titled Toasting then he followed it up with other singles Tiki Taka, Isai Mawoko and Haumbomugona in 2017.

He holds a City and Guilds and Hexco diploma in information communication technology, and music is his part-time job.

Related Topics:Nyasha David
Up Next