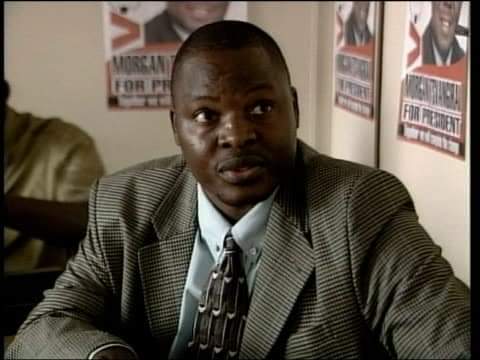 THE family of the late opposition MDC spokesperson Learnmore “Judha” Jongwe says Citizens’ Coalition for Change leader Nelson Chamisa is carrying the vision of the late firebrand politician who would have turned 48 years old on 28 April this year, amid fresh calls for an independent probe into his mysterious death.

Jongwe (pictured), who started off as a student activist and graduated into national politics at a young age, died aged 28 in a prison cell on 24 April 2002 awaiting trial for a case in which he was accused of killing his wife a month earlier.

The state was accused by the then Morgan Tsvangirai-led MDC of using food poison to murder him and snuff out his promising career in the opposition at a time when the late president Robert Mugabe mounted a fierce campaign to maintain his stranglehold on power.

In an exclusive interview with The NewsHawks, Passmore Jongwe, brother of the late fiery orator, revealed that the family still believes that what Learnmore died fighting for will be achieved in the not-so-distant future.

“I thank everyone who still remembers and recognises what my brother Learnmore did to this country. First and foremost, he managed to instil bravery, especially to the young generation of this country through his oratory skills. He was a straightforward person who always believed in justice. As the Jongwe family we shall always carry Learnmore’s hopes and desires to see a free Zimbabwe in which everyone enjoys,” he said.

Jongwe was survived by one child, Tawananyasha, who is now aged 21 and married.

Passmore revealed that she is now registered to vote and a strong follower of CCC.

“If Learnmore was to address Zimbabweans from his grave in Zhombe, he would tell all the young people to register to vote so that they build a bright future. He would urge those in power to respect the will of the people because they are clad in borrowed robes. My brother Learnmore would tell Zimbabweans that the actual owners of those robes are ready to take them up. Lastly, my brother would urge Zimbabweans to vote for youthful leadership led by president Chamisa,” said Passmore.

Learnmore Jongwe was president of Zinasu from 1994 to 1997. He became interim youth chairperson in 1999 when the MDC was formed. He became an MP for Kuwadzana constituency in Harare in 2 000 and later became the party spokesperson, a position he held until his time of death.

Molokele, the MP for Whange Central, who coordinates the Learnmore Jongwe Foundation, told The NewsHawks that if Learnmore were to speak from the grave, his clarion call would be for the young people to be at the centre of the struggle for change.

“I think he would have said our struggle remains our birthright and encourage young people not to take a back seat on issues of national development. He would have encouraged the youths and students of Zimbabwe to promote the democratic agenda of this country. So he would have loved to see the young people actively involved, especially in political leadership and business, to make sure that Zimbabwe becomes a great country,” he said.

Molokele urged the present government to appoint a commission of enquiry to look into the circumstances of Jongwe’s death.

“The circumstances of his death remain unclear even up to now. I think it’s important that this matter is fully resolved. If I had the power, I would appoint an independent commission of enquiry to interview all the people who were involved in the circumstances around his death, especially the inmates, prison wardens and family members so that what happened is unearthed. Instead of relying on speculation, the independent commission would come up with conclusive findings and recommendations so that there is closure to this matter,” he said.–STAFF WRITER.