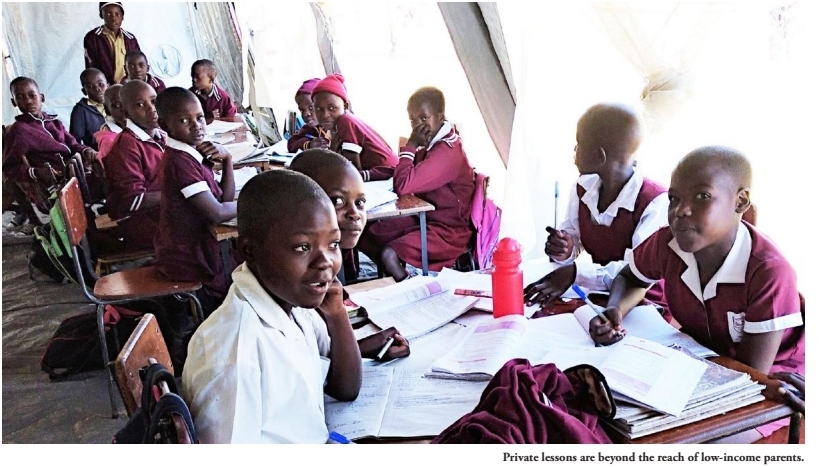 IT is 11am on a Tuesday in Highfield suburb, 15 kilometres outside central Harare and children are playing in the dirt, with not a care in the world.

A 10-year-old boy kicks a ball to signal the start of a street soccer match, as a group of boys tussle for possession.

The winning team will take home US$1, which is used to buy eats after the match.

One can tell the idea of going back to school is far from their minds as they have spent months at home due to successive lockdowns meant to contain the spread of Covid-19.

A group of secondary school pupils, clutching books, walks past the street match on their way from private lessons.

These are the privileged ones. Many of their peers look at them with envy. They will be far ahead of their peers when schools open for non-examination classes on Monday.

School lessons resumed for examination classes on Monday this week and the gulf between those who went for extra-lessons and those who were at home throughout is likely to be as clear as night and day.

Private lessons were, and remain, beyond the reach of many parents in the low-income townships. As a result, many school-going children willing to continue with their studies during lockdown were exposed to social delinquencies such as drug abuse and premature sex.

The government in March reported a sharp increase in teen pregnancies and child marriage with at least 4 959 girls falling pregnant between 1 January and February 5 this year. At least 1 174 cases of child marriages were also recorded, although many others are thought to have been unrecorded.

Presenting a report to Parliament on the level of public service delivery related to gender-based violence during the pandemic, Women’s Affairs minister Sithembiso Nyoni said social vices such as child marriage were on the increase, attributing rising cases to the Covid-19 pandemic.

“A total of 4 959 got impregnated in such a short period and this means that nearly 5 000 of our girls risk losing their opportunity if they do not pursue re-admission,” Nyoni said.

“They have lost opportunities and have also become vulnerable to other forms of violence, assault, which include economic and emotional abuse’’.

Although many parents could not afford private lessons, it remained the only solution to keeping school children occupied during the lockdown.

Children who come from vulnerable families were, however, left out.

With Covid-19 continuing to ravage incomes and livelihoods, most parents could not put food on the table, let alone pay for lessons.

Teachers took advantage of the lockdown to charge between US$5 and US$15 per subject per month.

For Thandiwe Dhlodhlo, an Upper Sixth pupil in Highfield, learning during lockdown was difficult.

“I did not attend any online lessons since lockdown, it is something I only heard on radio and television but was never implemented at my school. I attended private lessons, but it was not the same with face-to-face classes at school,” Dhlodhlo told The NewsHawks.

Although she was privileged to attend private lessons, Dhlodhlo sympathises with her classmates who could not afford the improvised learning.

“I sympathise with my classmates who have not been able to go to private lessons because when schools open, we will not be able to cover the whole syllabus of our subjects”, the aspiring lawyer said.

“Lockdown has affected me academically because it was a challenge for me finding the money for all my three subjects, but I know the situation is worse for some of my peers.”

Inside a small room in Glen Norah suburb, dozens of students are attending a private lesson.
This is where Dhlodhlo has been studying since the government closed schools.

“I had no option because the parents were begging me to teach their children. I started with only 10, but with the closing of schools the number drastically shot up to 100, but I am not ignorant to the fact that I might be putting my students at risk of contracting Covid-19, so I encourage them to sanitise and to wear their mask,” a teacher who spoke to The NewsHawks on condition of anonymity said.

She said she had to split the children into many classes and slotted them in at different times to accommodate the huge number of students.

The teacher said while there are innovative teaching techniques like YouTube and WhatsApp, mostly through social media, students require face-to-face interaction with their teachers to ensure effective learning.

“Some of these new methods are limited in interaction between my students and me. Some students thrive with face-to-face learning. Besides, data is expensive as well,” she said.

In many cases, teachers played cat-and-mouse with the police, and, in some instances, had to pay bribes to continue with the lessons, given that the government banned private lessons.

However, while the government insisted on online learning, parents believed the method was not effective. Data expenses also blighted the learning method.

“As a parent, it pained me that our children were not able to go to school because of the policy that was implemented by the government, but to say that my children were lagging in terms of education would be a lie because we were sending them for extra lessons so that when schools re-open they would be ready for exams,” she said.

“I was aware that the government was against any form of gathering besides funerals, but our children’s future was at stake, so we had no choice, but to send them for lessons to school.”

A teacher in Highfield highlighted deep-seated inequalities in the education sector.

“Unlike private schools, most schools in high-density suburbs like Highfield failed to adapt to the new circumstances because of lack of funds to purchase data bundles for the teachers, among other resources. Students could also not afford data and you can imagine in rural areas the situation is even worse because some students don’t have access to the gadgets needed for e-learning. Some do not even have electricity,” she said.

“It is good that schools have opened children who were excluded from schooling during the lockdown will now be able to learn at the same pace with their peers who conducted private lessons although they will obviously be behind.”

Secretary for publicity in the Progressive Teachers’ Union of Zimbabwe (PTUZ) Peter Machenjera admitted that online learning was a challenge for students. He said it was difficult for teachers to assess pupils’ work online.

“The plans were to utilise online lessons as much as possible, but it had its challenges when it comes to those communities that are poor and could not afford data bundles. Many teachers were engaging their learners through WhatsApp classes. Others started Google classes,” he said.

“It must be noted that nothing much happened, especially in the rural areas coupled with the banning of face-to-face lessons due to Covid-19.

“The utilisation of television and radio which was implemented by the government failed to cater for the disabled. The government talked about radio and TV lessons but the true picture is that these lessons were benefitting very few learners. Most learners were not enjoying them due to various reasons.

These lessons are also not inclusive, as they did not cater to learners living with disabilities. Most learners in rural areas remained marooned faraway from these lessons.”

The resumption of classes will finally afford many under-privileged children access to education, which had become the preserve of children from well-to-do families.