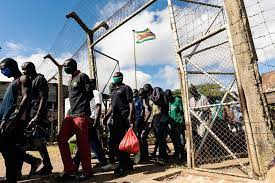 THE raw euphoria of dozens of prisoners chanting celebratory songs fills the air at Chikurubi Maximum Prison where hundreds of inmates have been released on presidential amnesty.

Another song erupts as a group of female inmates dances in celebration of their release.

Tawanirwe Nyasha, Isu Tawanirwe Nyasha (We have found divine favour), the female inmates erupt into song as their counterparts inside the prison fences look on.

“There is going to be another amnesty soon, you will be out,” they comfort their counterparts who could not make it out.

“We are still choked here, but we will be out soon,” replied one inmate clad in prison garb.
For many of these prisoners, Chikurubi has been their home for years, while some had been caged for months.

The joy of their release is pulpable.

For some, the amnesty is an emotional moment and a chance to make things right.
Youthful Tafadzwa Changadzo is one of the lucky inmates released under President Emmerson Mnangagwa’s prison amnesty.

Convicted of theft, Changadzo was lucky to serve only two months of her sentence before the amnesty was declared.

“I was serving eight months, but I couldn’t serve all of them because the Almighty Lord came to my rescue,” a visibly elated Changadzo said.

A remorseful Changadzo said: “I would like to apologise to my parents for what I did, and I cannot wait to see them.”

It is Saturday, at the high-walled Chikurubi Maximum Prison, which houses the country’s most dangerous criminals.

Dozens of former inmates wearing makeshift masks walk in single file as they exit the last gate out of Chikurubi.

Some may never see these grimy prison walls again — unless the proverbial long arm of the law drags them back into the cells.

Their crumpled shirts are a dead giveaway; these prisoners have been away from society for a while.

About 400 prisoners were released from Chikurubi Prison and other jails in the capital, Harare. More have been released from prisons countrywide after Mnangagwa declared amnesty.

Those released had been convicted of non-violent crimes while some convicted of crimes such as murder, treason, human trafficking, and sexual offences did not benefit from the Presidential pardon.

Mnangagwa also converted death sentences to life sentences for many prisoners on death row. While Zimbabwe maintains the death penalty, no death row inmate has been hanged in years, as anti-death penalty activists call for the abolition of capital punishment.

With a carrying capacity of 17 000 prisoners, the country’s prisons house about 22 000, a situation that has led to the overcrowding of prisons.

The rising number of inmates at the high-walled Chikurubi has put a strain on resources as there is not enough to eat.

Described by pro-democracy activist Evan Mawarire as “designed to kill your spirit”, Chikurubi is inhabitable for inmates who sometimes must survive on beans and sadza or badly cooked cabbage.
Political activists have borne the brunt of the ruthlessness of Chikurubi, as they are often kept in leg irons and denied home-cooked meals.

Mnangagwa, who worked for decades as the brutal enforcer of the late former president Robert Mugabe, has been accused of using lawfare against political opponents since rising to power on the back of a military coup in November 2017.

Political activists who have been sent to prison as part of a government crackdown on dissent have spoken of dire conditions, which they said put inmates at risk of both starvation and disease outbreak.

Journalist Hopewell Chin’ono, who has been jailed at Chikurubi three times in six months, spoke of prisoners’ abuse by prison guards and feared Covid-19 infection while in prison.

With no constant supply of water or soap, inmates are also forced to spend the day in an overcrowded courtyard.

“There is never enough food in prison so the lockdown meant we had to go hungry because our families could not bring us food. It was the hardest moment in my prison life,” Patience Gabhure, who had been jailed for six months for assault, said.

Richard Mutede, a former inmate, was elated at his release.

“I am free now, I am a free man. I would like to thank the President for this kind gesture,” Mutede said.
For prison official Alvord Gapare, the amnesty has come at the right time, considering constrained resources at Chikurubi.

“The amnesty will go a long way to reducing the prison population and that obviously means a reduction in the expenditure for the prison. And in terms of Covid-19, it is a huge advantage to us,” Gapare said.

He said prisons in the capital had recorded 173 confirmed Covid-19 infections and one death.
Due to rising coronavirus infections in the country’s prisons, the government had suspended visits. The suspension of visits has made life more difficult, particularly for new inmates.

Between March and June last year, Mnangagwa released 4 000 inmates in a bid to decongest the overcrowded prisons.