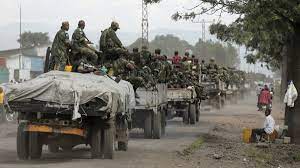 GOVERNMENT must compensate soldiers who participated in the Democratic Republic of Congo (DRC) war, a former army captain deployed to the battlefield, Solomon Ndlovu, said as he expressed frustration at the failure by the authorities to recognise their efforts more than two decades later.

LIZWE SEBATA
The call for compensation for participating in the DRC war comes at a time when the Southern African Development Community (Sadc), Zimbabwe included, mulls military intervention against terrorists in Mozambique.

Military action by the Mozambican government, including the use of mercenaries, has not stopped the attacks amid fears that, if left unchecked, the insurgency could spill into neighbouring countries.

The late president Robert Mugabe deployed an estimated 10 000 troops in DRC at a cost of US$3 milion per month to provide support to the late President Laurent Kabila’s embattled regime, saving Kinshasa from military takeover by rebels backed by Burundi and Rwanda.

Zimbabwe’s involvement in the war, which erupted in August 1998, cost the army billions of dollars in lost military arsenal while also choking the economy. A number of Zimbabwean soldiers lost their lives but the exact figure has not been disclosed.

Several reports show that the Zimbabwe National Army (ZNA) and top army brass benefited from the war through lucrative mining contracts, leaving Ndlovu and other soldiers who were deployed on the battlefield wallowing in misery and poverty.

“Our children always ask us why we even went to the DRC war since we have nothing to show for it; and we have no answer. Some children are fatherless owing to that DRC and there has been no compensation; what are we saying about those children who lost their fathers in a needless war?” asked Ndlovu who is seeking re-instatement into the ZNA after successfully appealing his six-year jail term at the High Court in 2019.

Ndlovu, a former chaplain at Mbalabala Barracks in Matabeleland South, was convicted in January 2018 and sentenced to six years in jail for theft of a motor vehicle by a Beitbridge regional magistrate.
He appealed the sentence at the High Court.

“We were sent to Ikela on arrival in Congo, as a company, where we fought alongside Namibian soldiers who were getting US$900 while we being paid USD$320 but fighting the same war yet we were the ones commanding the Namibians and under the command of the likes of Colonel Lizwe Nyathi,” said Ndlovu narrating the DRC ordeal.

“We had 84 contacts during that year (1999) in Ikela with the enemy; we couldn’t sleep during those times; those were abnormal times fighting the enemy.

Mugabe paid ex-combatants an unbudgeted ZW$50 000 in 1997 for their participation in the liberation war.

“When we came to Zimbabwe after one year in Congo, the government promised us farms but to date we have not received anything. What we only have are the bravery medals which we received. The bravery medals did not come with any financial benefits. We were also given one rank one up but that was not enough,” he added.

Ndlovu is yet to be re-instated into the ZNA after his acquittal by the courts with the latter claiming the ex-army captain had been discharged from duty, a claim he denies.

“We fought a war in a foreign country and we deserve compensation. Our children will demand that compensation on our behalf after we depart from this earth as that war history is on record.”

According to reports in 2018, President Emmerson Mnangagwa approached the then DRC president Laurent Kabila demanding US$1 billion compensation for Zimbabwe’s participation in the war.