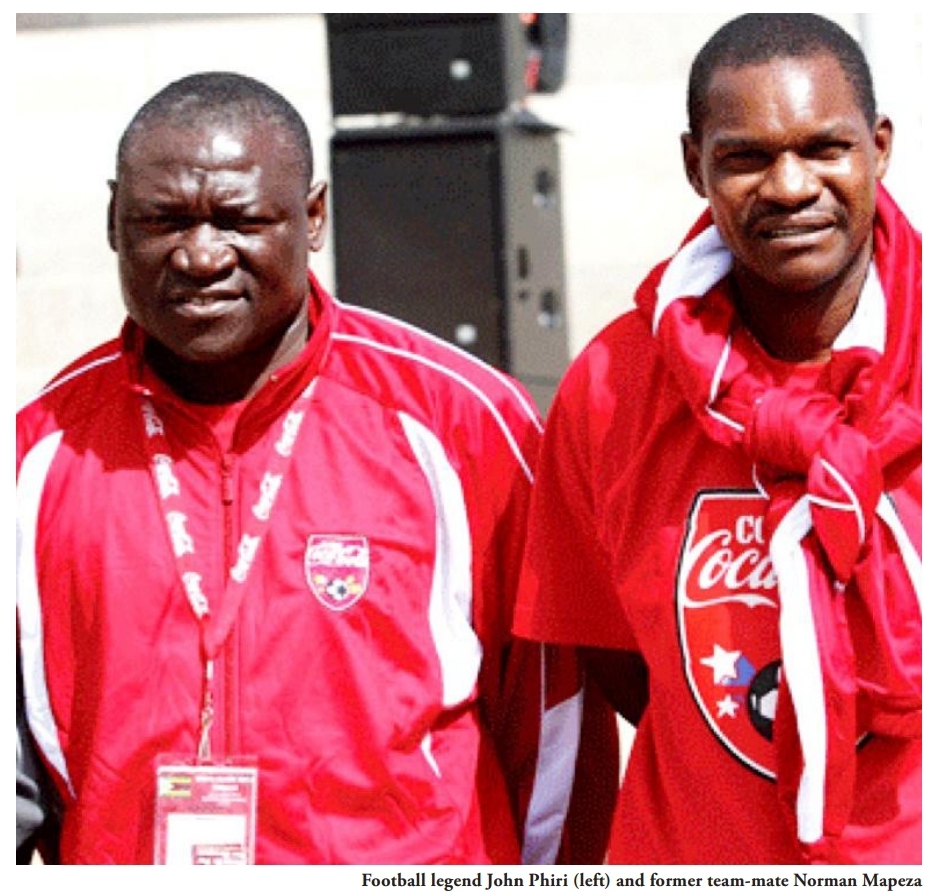 SAUTI Phiri was a young miner when he arrived at the height of labour migration within the region from his homeland of Zambia to work in Vumbachikwe, a mining outpost in Gwanda, the provincial capital of Matabeleland South in present-day Zimbabwe.

So when Phiri crossed the border from Zambia into Zimbabwe in the 1950s — as part of a welcome wave of labour immigration in search of greener pastures — in a life-changing journey, all he wanted was to toil underground and transform his life, possibly to return home with a fortune one day to spend the last years of his life reminiscing about his adventures down Southern Rhodesia.

Sauti was not gifted in sport. That did not however stop him from trying his hand at football, the federation’s most popular sport which came to be defined by immigrants across Zimbabwe for decades to come.

His son, christened July Sauti Phiri, was the first person in the family to make a breakthrough and a name for himself in sport. July, who was born in Gwanda, became a striker who played multiracial football for Rhodesia Select in the mid-60s.

John Phiri — Sauti’s grandson and July’s son — was to later make it big and become one of the most decorated Zimbabwean footballers of all time; only second to the great Peter Ndlovu in terms of international caps for the country.

Ndlovu is widely acclaimed as the greatest Zimbabwean player of all time. Of course, football fans never entirely agree on such debates — whether it is about Ronaldo and Messi, or Pele and Maradona, for instance. Hence, some always bring up Moses Chunga or George Shaya’s names. For some it is Bruce Grobbelaar.

But no one doubts John was a great player.

“My grandfather came from a village called Mupauke in central Zambia, he was not a sporty person, but I was very close to him because I was his oldest grandson,” John, who played nearly 100 times for Zimbabwe in a 15-year international career, says.

“My father though, July, was a very good player. He was my biggest influence. I grew up watching him play football. He used to score a lot of goals. I wanted to be a striker like him, but I guess I didn’t have the skills to play in that position.”

July was at one time a teammate of Morrison Sifelani, one of the founder members of Dynamos FC, Zimbabwe’s most successful football club, whose history is dominated by descendants of immigrants.

In terms of work ambition and adventure, July was a chip off the old block – he was like his father Sauti. He also worked in the mines, but was adventurous. So he left years later to settle in Kadoma, a mining town 140 km south west of Harare, where his first son John was born at Cam & Motor Mine. John’s football career took off there.

“My grandparents stayed behind in Vumbachikwe, whilst my dad came to Kadoma, where I was born,” says Phiri, a top defender in his prime.

“At Cam & Motors, I was spotted by the legendary coach John Rugg, who was Zimbabwe’s coach for both the national Under-23 side and the senior national team. At that time Rugg worked for Cam & Motor as the mine’s sports manager.

“Without hesitation, he immediately drafted me into the first team of Rio Tinto, a Kadoma club, where I teamed up with such great players as Ephert Lungu, Joseph Zulu, Robert Godoka, Wonder Phiri, David Mwanza, Raphael Phiri, Phenias Muchaviriri, Barnabas Likombola. It was a very good team. A lot of the players were sons of immigration workers from Malawi and Zambia. We used to beat some of the biggest teams in the country: Dynamos, Highlanders and Caps United.”

From Rio Tinto, John joined State House Tornadoes, which was headed by the country’s then president, the late Canaan Banana. Tornadoes later became Darryn T, where John blossomed under the tutelage of Polish coach Wieslaw Grabowski — a legend in Zimbabwean football.

John earned his first Zimbabwe cap in 1981, a year just after independence, in a match against Malawi.
For 15 years thereafter, he amassed nearly a century of caps, with his best memories being under the maverick Reinhard Fabisch, the late German coach who guided Zimbabwe through an unbeaten 13-match streak.

Fabisch’s team beat the biggest African sides at the National Sports Stadium, which became a fortress.

The “Dream Team” was star-studded: Grobbelaar; Mercedes Sibanda, Melusi Nkiwane, Paul Gundani, Francis Shonhayi, Ephraim Chawanda, Willard Khumalo, Rahman Gumbo, Benjamin Nkonjera, Henry McKop, Adam Ndlovu, Peter Ndlovu, Vitalis Takawira and Agent Sawu, among others. And of course a number of the players are now late, including Sibanda, Shonhayi, Khumalo, Nkonjera and Adam Ndlovu.
At least a third of the team were descendants of immigrants. That included John. Often that has been the case with the national team, itself a reflection of the clubs.

“That was the best time of my national team career,” says John. “We beat some of the best teams in Africa: Egypt, Cameroon, Togo, Guinea. We put Zimbabwean football on the map. In those days, when you mentioned Zimbabwe, the first thing that came to mind was Robert Mugabe, the late former president. But then when we got into the picture, and when the name Zimbabwe was mentioned, it was Robert Mugabe and the football team that people around the world mentioned.”

Born and bred in Zimbabwe, John says throughout his football career and lifetime he never encountered any form of discrimination on grounds of his foreign roots.

“No, never,” he says. “That never happened. We were all Zimbabweans. If there was any discrimination, maybe it was the innocent kind of banter, like being called ‘Phiri the Malawian is going to win it for us today’. A lot of people actually thought I’m of Malawian origin.”

Generally, even if Zimbabwe has millions of descendants of immigrants as citizens in different spheres of life — sport, music, business, politics and professionals; in fact everywhere — people hardly talk about it.

Like in any other society, the issue of course may crop up once in a while here and there, especially through stereotypes, but it is not a big issue within mainstream communities, except perhaps within politics when votes are at stake and it was convenient. Even then it is done and spoken about in hushed tones.

Zambia, the land of Phiri’s forefathers, has achieved more success in football than Zimbabwe. The Zambians were African champions in 2012. Before that they were in the finals in 1994.

There have always performed better than Zimbabwe at the international, although between the rivalry is very close.

By contrast, John himself never got to play at a major international football tournament for Zimbabwe.
What if John had been born in Zambia? Would he have become a bigger and better player?

“You cannot choose where you were born,” he says. “I feel proud to have been born Zimbabwean, representing my country. Zimbabwe and football made me who I am. If it wasn’t because of football, you wouldn’t be talking to me right now.”

Sport runs in the Phiri family. John’s oldest son, July, named after his grandfather, was a talented rugby player at Allan Wilson School in Harare.

Joel, the youngest, is still a student at Prince Edward in the capital, where he plays football.

John has been to Zambia on football trips. Growing up, his grandfather rarely spoke about his homeland to his Zimbabwean family.

“My grandfather never said much about his Zambian roots, or any intention to go back or take his children and grandchildren there. Maybe wanga waine zvikwereti(maybe he left debts there),” chuckles John. “I’ve been to Zambian with football, but maybe one day I would like to go deeper into the country and try to retrace my roots.”

There are so many great Zimbabwean players with foreign roots. Some of them include Alec Masanjala, Peter Nyama, Moses Chunga, Shacky Tauro, Joel Shambo, Brenna Msiska, Mwanza, Zulu, Lungu, Chawanda, Sawu, Nkonjera and Benjani Mwaruwari, among others.

Even Khumalo — whose father’s surname was Mashinkila — was from Zambia. The mother was local.
Of course, John’s name will always crop up in this esteemed list.

In fact, it is impossible to tell the history and story of Zimbabwean football without descendants of immigrants who had settled in mining towns and old townships in main cities much earlier than locals, hence exposure and their massive contribution to the beautiful game.

Such is the story of football in Zimbabwe, which millions can also relate to in their own personal life histories, reflecting the country as a melting pot of diverse and plural ethnicities — a tapestry of identities — with locals and those with roots from across the region interwoven into a multicultural society with all its benefits and flaws.

We have a better chance in Tests: Brendan Taylor