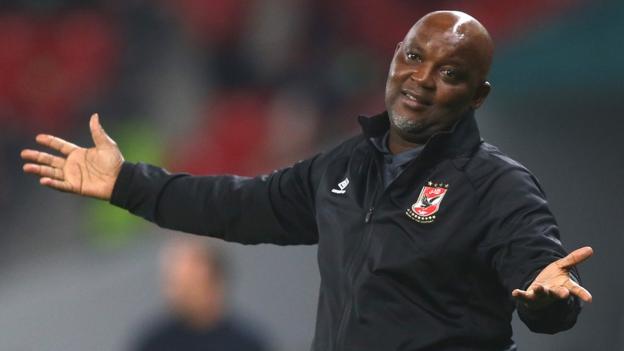 PITSO Mosimane is a household name in South Africa and last year September he took on the task to become the head coach of Africa’s biggest club, Al Ahly.

Since he arrived in the homeland of the majestic Sphinx, the former Mamelodi Sundowns mentor guided the Red Devils to the Egyptian Premier League, the Egypt Cup, the CAF Champions League and the CAF Super Cup.

He then went onto the global stage with Al Ahly at the Club World Cup in Doha, securing a third-place finish.

But Saturday’s looming CAF Champions League final against Kaizer Chiefs in Morocco has quite a lot at stake for the prestigious coach.

For Al Ahly, they will reach a mammoth milestone of 10 Champions League crowns, a feat that is so fitting for Nadi El Qarn — The Club of The Century.

Despite doing so well in Africa, the Red Devils are falling behind domestically.

In the Egyptian Premier League, Mosimane’s charges are in second place with 51 points as rivals Zamalek boast a 10-point lead with 61 points.

However, Mosimane has four games in the pocket to his advantage.

For now, the South African-born coach has all his attention and energy on Saturday’s final.

Mosimane is no stranger to creating a bit of history.

“Jingles”, as he is fondly referred to, has done it before during his almost eight-year tenure with Masandawana.

Winning titles is a formula that Mosimane has become familiar with during his time at Chloorkop.

His 13 major trophies won with SuperSport United and Sundowns make for an impressive CV.

It was enough evidence for Al Ahly to want Mosimane’s football recipe and, so far, it has proved to be a success.

After inking his deal with the Red Devils, Mosimane exported a fellow South African to Egypt to be a part of his technical staff.

Former Platinum Stars and AmaZulu mentor Cavin Johnson is an assistant coach at Al Ahly. The move came as a pleasant surprise to many South Africans as the pair have gone on to do good work in Cairo.

Mosimane and Johnson will feel at home in the final as they come face-to-face with a South African team, again.

Al Ahly knocked out Sundowns at the quarter-final stage, a home and away fixture that had its own touch of colourful emotions from both camps.

The Red Devils then eased past ES Tunis to set up this weekend’s much-anticipated encounter against the Glamour Boys. – Agencies