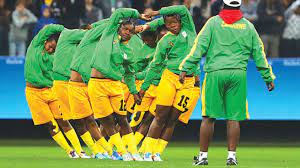 PERHAPS fate decided the course for Zimbabwe’s best female footballers, to shield them from greater heartache if they had qualified for the 2022 Women’s Africa Cup of Nations this year but barred from competing.

They did not qualify, Botswana won a two-legged last phase of qualifiers last month and they will be off to Morocco in July at the expense of our more fancied Mighty Warriors.

Zimbabwe would not have been allowed at the tournament, anyway, even if they had qualified, because in the same month Fifa suspended the country from all forms of international football on charges of government interference in the activities of the Zimbabwe Football Association (Zifa).

The Mighty Warriors were going to become the first major victim of that Fifa ban, a development that would have carried heavy irony in the on-going Zimbabwean football saga.

The irony, of course, would be the thought of female footballers feeling hard-done-by due to a sanction that has been caused by, amongst others, allegations of sexual harassment against female referees.

The government-appointed Sports and Recreation Commission (SRC) sacked top Zifa executives last November for improper conduct, one of the charges being the making of sexual advances towards female match officials.

Fifa outlaws such actions by external bodies and has demanded unconditional reinstatement of the Zifa board for the country’s ban to be lifted.

The SRC – which is taking its punitive measures against Zifa very seriously – says it will not move an inch.

We do not know what was going to happen between now and July when the Women’s Afcon tournament kicks off, in the event that the Mighty Warriors had qualified.

But what we know is that if the SRC did not back down, it certainly was going to be a major talking point, I daresay a controversial one, a catch-22 scenario for the country’s sports-controlling body.

It would have seemed contrary to what the SRC says it is trying to do: protecting the integrity of the girl child by punishing perpetrators of unwanted approaches, yet at the same time denying other female sportspersons their well-deserved opportunity to contest a major tournament.

The Mighty Warriors would feel robbed and hurt, no doubt. But if that pain of not going to Morocco was to be eased by the conscience of solidarity with fellow females subjected to sexual harassment, I leave that to them.

The players most likely sympathise with the referees, of course. They can relate, because they too are potential victims and indeed such advances have also been previously reported within their own camp.

Well, as it turned out, the Mighty Warriors did not qualify, and Zimbabwe has escaped from an extremely tricky situation that was sure to pose a great dilemma to everyone involved.

It is a lesson and relief at the same time for the SRC and all stakeholders as the nation meanwhile tries to alleviate the effects of this ban, whose duration is anyone’s guess right now.