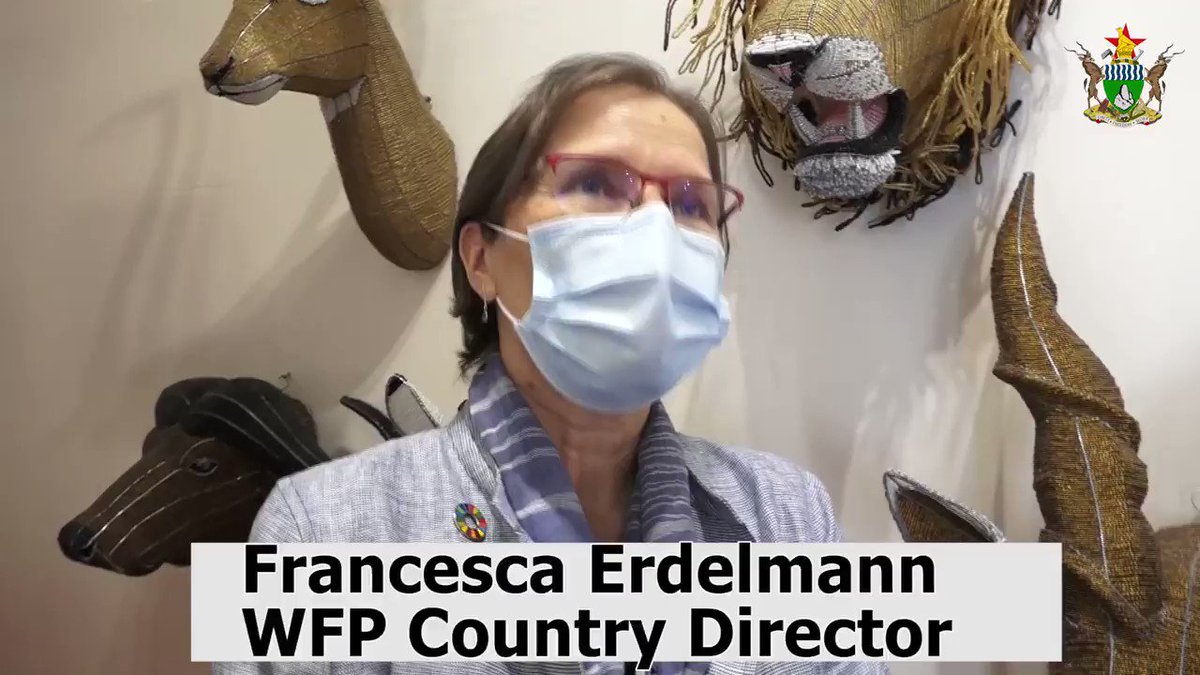 ZIMBABWE is battling a humanitarian crisis, with almost eight million people facing severe food shortages. United Nations (UN) agencies have been making frantic efforts to provide food to vulnerable communities around the country. With the situation expected to worsen if Zimbabwe does not experience a good rainy season, the World Food Programme (WFP) is bracing itself to scale up the drought response programme, at the peak of the lean season (January-March). The WFP’s new country representative, Francesca Erdelmann (FE), had a chat with The NewsHawks reporter Nyasha Chingono (NC) to discuss food security issues. Below are excerpts from the interview:

NC: Zimbabwe is reeling under severe hunger. How many people have been affected countrywide and what interventions has the WFP come up with?

FE: Well, it’s not so much my assessment, we rely a lot on assessments that are undertaken by a group of experts.
The Food and Nutrition Council in Zimbabwe has undertaken a rural assessment in July and the report that came out in September indicates that from January onwards, through the lean season, which ends at the end of April, they expect to be some 4.5 million rural people in need of food assistance. They are currently undertaking a similar assessment in urban areas and for that we must wait and see how many people they consider as part of the data collection. But, yes, the expectation is that that would be around three million or plus. So, in totality we will be talking about more than eight million people that are food insecure in Zimbabwe.
Now, there is another set of analytics that looks at different levels of severity of food insecurity and looks at the geographical spread within the country. That analysis has indicated that around 5.7 million people in urban and rural areas need food assistance, as a top priority. So, these do not include people who are sort of in the borderline, but the more severe cases, so there is 5.7 million people. Then there is also a group of 1.2 million people that are receiving food assistance already, who without that food assistance may be among those who are severely food insecure. So, if you would add that on top, we are already coming to 6.9 million. There are different numbers, which represent different things. As a humanitarian community, we are really looking at the 5.7 million plus the 1.2 million that need to continue receiving assistance.

NC: What is the WFP doing to combat hunger in Zimbabwe as we enter the lean season?

FE: Well, in the short term, we are providing food assistance to rural households. Right now, we are at about 1.1 million households.
These are receiving food baskets, which consist of peas or maize-meal, oil and pulses. And for some households, also, they include a nutritionally enhanced product because there are small children or pregnant, lactating women in the household. In urban areas, we provide cash-based assistance, where people are able to procure their own food basket, either because of the cash that they receive through a remittance-based organisation, or through a swipe card voucher system.
The value per person, per month is about US$12. Depending on the household size, each household will get a card. We are also trying to help people make sure that their agricultural activities take off properly, now that the agricultural season is starting. So, we are looking also at helping communities to protect themselves from climate risks. We are doing a lot of work with communities to understand those risks and helping communities to take out insurance against drought, for example.

NC: How much has WFP budgeted for drought response in Zimbabwe?

FE: It is an interesting question and that is exactly what I was just talking about with my colleague. Right now, we are re-doing our budgets, so I cannot give you a total figure. That is partly because that report in September about severity and the priorities only came out 10 days ago.
We must rethink what role the WFP can play because we are not the only player. Government is a big player; the many NGOs and other UN agencies are also providing support in this environment, so we need to take stock of the new information that we have, and then we need to establish it ourselves. The budgets we are talking about run into several hundreds of millions of dollars, for one person to receive food assistance, and that is then the food basket, as well as all the costs to get it to people.
Now, I am just giving you a ballpark figure, but I think we spend about 80 (US) cents per person per day. So, we now need to calculate, again, the total budget, and we need to see the resources that are already available.
There are several donors, who have already provided funding that will last us until the end of the season, that is great because then that means that we can plan. But, yes, we are expecting to still have a considerable shortfall to be able to scale up. As WFP, we would like to reach out to slightly over 4 million people.
We want to continue this until the end of April and then we want to scale that up to about three-and-a-half million people. In urban areas, we would like to reach out to about 550 000 people. Right now, we are reaching about 325 000. That is why a lot of additional funding is necessary.

NC: Your predecessor, Eddie Rowe, indicated challenges in importing grain because of the Covid-19 pandemic, as some imports are coming from South America.  How is the situation so far and are you able to import enough grain on time?

FE: Well, we are prioritising importing from the region, so we are trying to really very hard to source the maize in the region. That is also possible because in Zambia and in South Africa, they had a good harvest. Even in areas of Mozambique, they also had a good harvest.
So, we are working very hard to preposition some maize that we can purchase, for example in Zambia we are trying to reposition this in Zimbabwe so that it is readily available for us. That also means that we can buy at a time that the prices are still good, so we can maximise the utilisation of our resources. For Covid-19, really what we have seen the most in terms of the challenge, of course, the border crossings. And because the regulations that were introduced by countries, for people movement also had implications for movements of trucks, for example.
If we now look at what is happening at the South Africa/Zimbabwe border, there are a lot of trucks that take a long time to get here; at the Zambia and Zimbabwe border as well.
So these are things that we had to navigate, but that’s not impossible and we just need to adjust; adjust our expectations in terms of timing and adjust our involvement with the clearing agents at the borders so that we can assist so that there is easy movement.

NC: You have been with WFP Zimbabwe for three or four months. How is the operation going so far? How have you found your stay in Zimbabwe thus far?

FE:  Well, I am three, four months old living and working in Zimbabwe, but I am already 18 years old working in this region. I was working out of the South African regional bureau for a very long time and so I had quite a lot of interactions with the WFP team in Zimbabwe, but also with government counterparts in Zimbabwe over the years. I do not come completely fresh.
I really appreciate a very strong team that I found here; I very much appreciate the strong collaboration with government that I found here. So, yes, I mean operations are going strong, but, of course, with the challenges that we are finding Covid-19 made it more difficult to operate in new communities. It is not as easy for people to come all together to receive their food altogether, so we had to ask the community to come in smaller groups.
Our own teams cannot travel as frequently to the field as maybe we would have done in the past, so we had to make a lot of adjustments. When I came here, I found the team was already very much on top of that, making my job easy.

NC: What is your assessment of the government’s response to droughts in the country?

FE: Well, I have not been able to go on the ground and see so much yet. I have learnt a lot from what I hear in the media. There have been a lot of launches on the agricultural input programmes, for example, which I think is very impressive and very timely.
I have had a lot of conversations with our government counterparts about their commitment to provide maize or cash in urban areas. So, I believe that they are very strongly committed to aiding assistance. We are all dealing with financial challenges as well, so all our abilities to deliver on our commitments will rely a lot on the availability of financing, our ability of sourcing the resources that we needed, the foods and the capacity to deliver.

NC: Lastly, congratulations to the World Food Programme on winning the Nobel Peace Prize. What does it mean for that young girl you are assisting with cereal in Mutare, or that single mother who is receiving lean-season support in Mwenezi?

FE: Well, you know, first of all, it is a great recognition for the WFP team for the work that they are doing, it is a huge boost, to give them renewed energy that the world has given this recognition to the work that we do. It is, of course, also a great recognition to all the partnerships that we have.
I think it is a message to say, you know, you are doing a great job, we want you to do more of it. But it also places a big responsibility on us to keep doing the job, but to do it bigger and better. It also a recognition that food security and peace are very much connected. It is also a call not only to the World Food Programme, but all the partners that we work with, to really pay attention to hunger, to food security. Hopefully, that will also translate in us being able to have more confidence but also more support to do our job here in Zimbabwe.