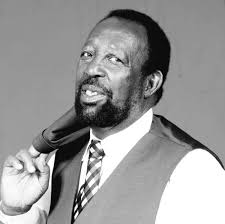 WHAT Zimbabwean football songs give you goose bumps?

JONATHAN MBIRIYAMVEKA
If you grew up in the 1980s and ‘90s, Zexie Manatsa’s monster hits were guaranteed to make you fall in love not only with the game but also with one of the four local teams the legendary musician famously sang about.

Testament to music’s power to bring people together, even the greatest of sporting rivalries, old foes of football in Zimbabwe – Dynamos and Highlanders – on Thursday united in paying tribute to Manatsa (pictured), who released timeless classics more than three decades ago in praise of the two hugely popular clubs. In a gesture of gratitude, the two clubs pledged to help Manatsa complete construction of his suburban home in the Sentosa area of Zimbabwe’s capital city Harare.

In the Dynamos track, Manatsa applauds some of the greatest players ever produced by the Harare giants – the likes of Moses Chunga, Clayton Munemo, Max Makanza, Biggie Zuze, Leon Ntawatawa, among others.

He sings about his anticipation of goals from Zimbabwe’s most decorated club in terms of silverware, asking the in-field players if they have scored, and if goalkeeper Ntawatawa had made saves. For Highlanders, Manatsa hails the country’s oldest football club for winning a game, thanking the players for the good result and wishing them more success in the future. He hopes the team will continue defeating its opponents.

Manatsa’s football hits were however not only dedicated to Dynamos and Highlanders. He also sang in praise of CAPS United and the now-defunct Zimbabwe Saints, also among the country’s traditional big clubs. CAPS and Saints were however not part of Thursday’s function at the Manatsa family home.

The gesture this week by the clubs follows a prior meeting between Manatsa and Tino Machakaire – Zimbabwe’s deputy minister of Youth, Sports and Arts – who egged on the clubs to consider honouring the veteran hitmaker.

Dynamos chairperson Isiah Mupfurutsa remarked that the 22-time Zimbabwean champions appreciated the “good work” done by Manatsa, adding on that they were happy to come to his help. Modern Ngwenya, Highlanders’ vice-chairperson, also showered praise on Manatsa, commenting that both music and football were “therapeutic and soothing.”

Both clubs gifted Manatsa with customised replica jerseys. The Highlanders shirt was inscribed number “87” at the back, signifying the year their song was recorded by Manatsa. Now 78, Manatsa retired from public performances in 2019 to concentrate on his calling as a minster of the gospel.

Manatsa’s affinity for both Highlanders and Dynamos is not accidental. The Mhangura-born songwriter launched his music career in 1969 in Highlanders’ hometown, Bulawayo, where he lived as a young man for seven years and performed at the iconic Stanley Hall, which was declared a national monument by the Zimbabwean government in 2017.

And then in 1979, Manatsa wedded his long-time partner Stella at Rufaro Stadium in a glitzy ceremony attended by the who’s who of society.

Rufaro Stadium is the traditional home-ground of Dynamos.