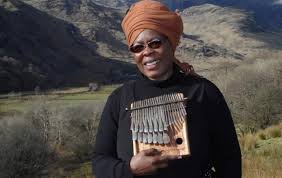 ZIMBABWE’S international mbira player  Stella Chiweshe – who is nearing her twilight says – she will soon be retiring from public performances and perhaps return home.

JONATHAN MBIRIYAMVEKA
Affectionately known as the Mbira Queen to some or AmbuyaChiweshe to others, because she is now a great-grandmother, the internationally acclaimed musician has been living with her husband in Berlin for 34 years.

Now turning 75 in July, the Mbira Queen performs sold out concerts around the world.

She is heeding a call by her “vadzimu” (ancestors) to return home where she is building Chivanhu Trust in Masembura near Bindura. That is where she will be living as well as teaching Zimbabwe’s culture and music.

In an interview with The NewsHawks, Ambuya Chiweshe confirmed her desire to settle back home in Zimbabwe than in Europe.

“It is a pity that in as much as I want to return home, there are more shows coming my way.

“I think vadzimu (my ancestors) want to see if I am going to make the right decision or not and return home because that is what they expect of me,” she said.

The upcoming album features eight tracks which draw much from the origins of mbira where songs were only performed as instrumentals.

“Rusere, which means eighth in Shona, is the title of my upcoming album,” she says.

“I got a call a night before the launch that I was to perform at the unveiling ceremony. So I picked that song because it is a song for VaGova which means vayera Shava (those of Shava totem).

“We’re descendants of the Nyashanu ancestral lineage. I also heard the song in 1962 on the day that Dr Samuel Parirenyatwa died. I would not expect children of today to know this ancient song, even though it’s on Chisi album, to understand the song. That song was spiritual and meant for VaCharwe and I sang it for her,” she said.

Rusere will be due out anytime soon but fans will be in for a huge surprise.

“Mbira music tells messages if we don’t sing at all. That is how it should be and that is how it was originally done. Before, music producers who didn’t know anything about mbira forced mbira players to sing over mbira beat.  And now mbira is used as a backing instrument to their voices. The producers also determined how long the song should be, but mbira is not played like that,” she said.

One of her songs on YouTube, titled Mbira Trip, plays for at least one hour 37 seconds.

“A song is like a journey it can be as long as it gets. Yes, I would want to perform with a group but, all the founding group members are now late. It takes a long time to train musicians to play and behave as I want on stage. Now in Europe I’ve gone back to perform as a solo artiste as I used to when I started out.
“In Europe, mbira fans like to listen to music while quietly seated as they do when listening to classical music. The venues for such performances are held in theatres, not in pubs,” she said.

“But here it appears people want to dance, this is why they enjoy it when I perform ChaaChimurenga or Huya Uzoona but I have a lot of songs that people have not listened to”.

Another aspect of her show is that Ambuya Chiweshe meditates before she takes to the stage.

“I take about 45 minutes meditating backstage and another 30 minutes to just calm my nerves. You cannot perform well when your mind is scattered.

“This is why I don’t just go on stage without meditation because I will be empty. The same goes when I go for recording, I don’t write songs down but I meditate and everything comes naturally.”

“It took them two to three weeks before the group members could master this, yet I learnt and mastered this at once. That is how spiritual it is,” she said.

“Another importance of meditation is that I want the musicians or band members to fit the mood and character of the songs on the playlist.

“If we are playing a happy song, the musicians should put on happy faces. If we are performing a sad song, they should be truly sad.”

She is determined to share her experience over the years to keep the mbira legacy alive.
Although she still is able to play mbira, Ambuya Chiweshe says she is no longer as agile as during her younger years.

“People ask if I’m still able to dance or jump like I used to on stage but, that was then, I’m now old. I still play mbira, that doesn’t change,” she said.

Ambuya Chiweshe also appeared at Africa Day celebrations held at the PanAfrika Africa Day Music Festival where she was a special guest.

She performed Huya Uzoona backed by young musicians, much to the delight of her fans.

Apparently, her 1980s classic album, titled Ambuya, has been reissued in support of Chivanhu Trust.
Originally released in 1987, the album that features the hit song Chaachimurenga  was re-mastered from analogue tapes and is now available on vinyl, compact disc and online.

Explaining the oft-misquoted song ChaaChimurenga, Ambuya Chiweshe said each song has its own story and there was a reason why it was recorded.

“Yes, most of these songs resonate very much, with what is going on around the world right now. On this album this is where the song Chaachimurenga is.

“What I was singing about in that song ChaaChimurenga, where I said; ‘ko iyi hondo muri kuyi wona here vakomana iyo?’ (Comrades do you see the spiritual war coming?) Yaive hondo yekufa kwanhasi uku, kweku wurayiwa nechatisinga wone (we are dying of something we cannot see). In 1987, I dreamt of this kind of death that we are facing nowadays, plus the album Ambuya! has been re-issued at the right time.”