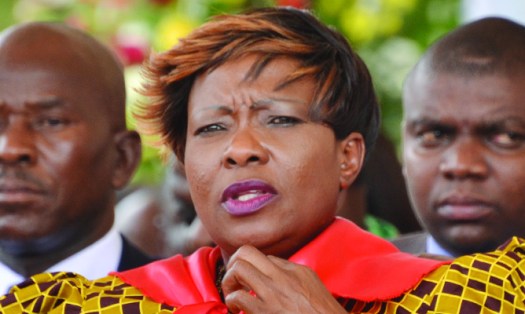 FIRST Lady Auxillia Mnangagwa’s family is embroiled in a nasty fight over a chieftainship in her rural village in Mazowe district, Mashonaland Central province, amid fears she used her influence to have her brother Paradzai Kutyauripo take over from Luscious Chitsinde as Chief Negomo.

The fight has turned nasty and further divided the ruling Zanu PF in the province as the party leadership is reportedly divided over who to support with those aligned to Auxillia in full support of Kutyauripo’s rise. Kutyauripo is also director of State Residences.

According to a 25 February 2022 letter to Chitsinde by the Mazowe district development coordinator, Mark Kadaira, which was also copied to Kutyauripo, Chitsinde was ordered to immediately stop acting as Chief Negomo and surrender his regalia to the district office.

“Be advised that His Excellency, the President of the Republic of Zimbabwe has in terms of section 283 (a)(i) of the Constitution of Zimbabwe Amendment (No.20) Act of 2013 as read with Section (4) (i) of the Traditional Leaders Act Chapter (27:13) approved the appointment of Paradzai Kutyauripo as substantive Chief Negomo of Mazowe District with effect from the 6th of February, 2022,” the letter read in part.

“You are therefore requested to cease performing duties of a Chief and allow a smooth handover to the incoming Chief. You are further asked to handover regalia you have been using to the District Development Coordinator’s office.”

But Chitsinde told The NewsHawks this week that he was going nowhere as only President Emmerson Mnangagwa has the authority to write to him over such issues. Chitsinde alleged a sinister plot against him, accusing some political actors of “street corner” conspiracies and undermining the authority of the President who superintends over traditional chiefs.

“This is not procedural. I was shocked that in the letter, I was ordered to stop being a chief immediately and asked to bring everything. The President does not do that. He doesn’t fire a person like a dog like that. We only concluded that it was something being planned on street corners,” he added.

Zanu PF officials were divided over the chieftainship issue with sources who are part of a senior provincial officials’ WhatsApp group confirming the fights after a Mazowe district coordinating committee youth secretary for environment Roderick Nyikadzino reportedly issued a stern warning against those opposed to Kutyauripo’s rise.

“It is clear the President never made such decisions so we can only wonder where it is coming from,” the source added, while alleging Nyikadzino was a known disciple of the First Lady in the district. Nyikadzino is also accused of using unprintable words while verbally attacking Chitsinde’s wife who had questioned his behaviour of using social media to deal with family issues. However, Nyikadzino told The NewsHawks that there was nothing political about the issue as the President has spoken through a letter appointing Kutyauripo.

“There is no issue, we now have a new chief and we have letters of everything being approved by the President. Everything is in order and we have a new Chief Negomo after the families agreed to that,” he said.

“There is no politics at play here. If he wants to be political, why can’t he go to contest for political office? We cannot talk of politics on family issues.”

A faction opposed to the rise of Kutyauripo reportedly mobilised against the district development coordinator, accusing him of working with the First Lady’s camp to dethrone Chitsinde.

A family member insisted that the First Lady and the chief have not met for a long time and have never discussed the issue although the family has been seized with the matter.

“They (Chief Negomo and Auxillia) have not communicated for a long time particularly on the matter so we would not want to say she stands for anything particular in the issue,” a family member who declined to be named said.

But Chitsinde insisted he is still in charge, saying: “Is that the way to deal with chieftainship? I am still in charge. I was actually holding my traditional court sessions last Saturday and this Saturday I am going on with my work. If the President writes to me saying I must step aside and say they want someone else, I will.”

“Our grandfather Guruchena had several wives, close to 35. Out of the 35, our family is the biggest, then others until the family of the First Lady. We are of the same blood. We have not spoken for some time so I don’t know their views on me. I stay here in the village, they are in town and we do not see each other from time to time.”

“We have had several meetings as a family on the matter and it started I think around 2011 up to now and the families chose the acting chief to be substantive. Why? I don’t know, but it is up to the family to decide on the chieftainship, not that a DA can just write to you just like that.”

Chitsinde made headlines in 2012 after fighting the then former MDC-T leader and prime minister Morgan Tsvangirai, alleging that he had violated traditional custom by marrying in the “sacred month of November”.

Tsvangirai had married Locardia Karimatsenga Tembo in a November ceremony. There was suspicion Chitsinde was working with the late former president Robert Mugabe’s regime to fight the former premier who was fined two cattle, two sheep, a 10-metre-long piece of cloth and ball of snuff in absentia.

The High Court overturned the ruling.

Related Topics:auxillia mnangagwa
Up Next