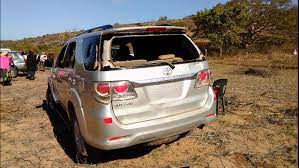 WHAT started as a pedestrian civic engagement for Zimbabwe’s main opposition MDC Alliance leader Nelson Chamisa to interface with communities and the grassroots in Masvingo this week ahead of the 2023 elections ended as a dramatic spectacle, with far-reaching implications for the forthcoming polls.

Chamisa has been widely criticised of late for the MDC Alliance’s internal ructions, with some of his colleagues objecting to his leadership style and accusing him of political lethargy to a point where some were beginning to question his utility while scouting for a new alternative. But his citizens’ engagement tour put paid to his critics’ gripes: he remains the leading opposition figure in Zimbabwe despite all his flaws and weaknesses.

Zanu PF threw everything in his path to block his civic engagement process. They mobilised their supporters, rented crowds and hire thugs to stop him. They even put physical barriers like cut tree stems and branches on the roads to hinder him from interacting with the grassroots.

In this era of social media, the “Stop Chamisa” campaign story was well-captured and documented through text, photographs and videos. It left him trending for days.

An investigation by The NewsHawks showed that the Zanu PF leadership, state security agents, including police and the Central Intelligence Organisation (CIO) operatives, were heavily involved in the campaign and subsequent violence aimed at stopping Chamisa from meeting his party supporters in Masvingo province.

The campaign against Chamisa was well-orchestrated. It began in Masvingo city, spread to Charumbira area, Chiredzi, Zaka and Bikita districts, leaving vehicles belonging to the opposition leader damaged and several people seriously injured in the ensuing violence.

The violent events reignited memories of the June 2008 violence as Masvingo was one of the provinces which recorded deaths among opposition members after the then president Robert Mugabe’s defeat by MDC founding leader Morgan Tsvangirai in the general elections.

Mugabe recovered from the first round of polling defeat through violence and killings. Bikita, Chiredzi and Zaka districts witnessed some of the worst cases of violence perpetrated by political brutes still walking the streets scot free.

In an interview with The NewsHawks last night, Chamisa said he was shocked by the levels of desperation among Zanu PF leaders and their supporters to stop him from undertaking his civic engagement campaign.

“It was incredible. The desperation, the stampede to stop us and the violence — shocking,” Chamisa said.

“We had gone on a citizens or community interface campaign to meet ordinary people and talk to them about their issues; things affecting their lives directly, the problems they have, their lived experiences, their initiatives to improve their situation and the sort of leadership they would want to change their current misery.

“We met communities and the grassroots, those on the receiving end of the current failures by Zanu PF and its government — youths, women, men, traditional leaders, and community influencers, ordinary people, from various walks of life.

“However, we had to overcome major stumbling blocks: Zanu PF supporters who blocked roads, chanted slogans and shouted, while attacking us, injuring people and damaging property, including our vehicles. Those protests were too structured to be spontaneous or haphazard, they appeared to have some command at high levels and were calculated to block us from penetrating the grassroots.

“Unfortunately for them, people came out in their numbers to meet us. We did not organise rallies, it was civic engagement. Everywhere we went, people came out, rushed and ran to meet us. It was amazing. In the end, it showed Zanu PF cannot stop the people. The party no longer has genuine and meaningful support in the grassroots. It only has rented crowds.”

MDC Alliance spokesperson Fadzai Mahere told The NewsHawks Chamisa was ambushed in different places during his visit. She said the attacks were orchestrated by Zanu PF with the support of the security sector. She added several party members were hospitalised after being injured and vehicles belonging to Chamisa’s convoy were damaged.

“It was a well-orchestrated attack meant to frustrate our leader’s visit in Masvingo. Several of our members were injured, but the president is safe. This is the true colour of the ruling party, their hands are dirty, but we remain resolute in our fight for change and we will not tire in our bid to dislodge this corrupt government,” Mahere said.

Earlier, Chamisa had told The NewsHawks on Wednesday that the attacks on him betrayed President Emmerson Mnangagwa’s desperation and fear of electoral defeat.

“General elections are 18 months away, but we are beginning to see panicky aggressive behaviour and violence by Zanu PF and its supporters,” he said.

“Mnangagwa lost the 2018 polls. What we are seeing now are the last kicks of a dying and going horse. They are lashing out at us desperately. On top of losing elections, his new dispensation has been a huge disaster. It’s a composition of a lie and deception, he sold people a dummy; his new dispensation has turned out to be a new deception, but people won’t buy that this time around. That’s why he is scared.”

Chamisa added: “The behaviour of Mnangagwa and his Zanu PF supporters is that of  losers who are clearly terrified of  elections; they are even afraid of by-elections with their puppets purporting to be opposition. He lost in 2018, he is a dying and going horse lashing out everywhere desperately in fear and aggression.

“The ruling party is afraid of just seeing us going to the people. They want to keep the people imprisoned by fear so that they don’t get to listen to our alternative governance and policy proposals, and message. Their violence is out of fear, but people are not afraid of supporting their own choices and their cause.

“Mnangagwa knows the truth: We can defeat him in elections anytime anywhere, whether in Masvingo, across Zimbabwe, on the mountains, over the seas, during the day, night, in space or on another planet. So long as the elections are free and fair, we win big time. He has no chance.

“That is why we are demanding electoral reforms first, we want a level playing field. We can’t have elections presided over by a compromised and partisan electoral body which acts as a referee, player and coach at the same time. We want free, fair and credible elections; if that environment is created, we win.”

Zanu PF Masvingo provincial spokesperson Ophias Murambiwa claimed the raids on Chamisa were done by supporters of MDC Alliance co-deputy leader Tendai Biti’s faction, not members of the ruling party. But he failed to explain the situation after the reporter furnished him with details of ruling party leaders who sponsored the attackers with food and vehicles, including their own public actions and confessions.

“Our party was not involved in the attacks. From the information which l have, those who attacked Chamisa are members of his party who are aligned to Tendai Biti. On the evidence which you are giving me, let me look for more information and l will come back to you,” Murambiwa said.

Various witnesses interviewed by The NewsHawks said they saw vehicles at Pangolin shops in Masvingo getting printed placards from unmarked vehicles. They said the placards were later seen in Charumbira.

“It all started in the morning when we saw unmarked vehicles with well-printed placards at Pangolin shops. A few minutes later, police besieged the house of Wilstaf Sitemere in Target Kopje where Chamisa was supposed to address a provincial assembly meeting. We then left for Charumbira, but on our way we found a roadblock at Stop Over, which is 10 kilometres from town along the Great Zimbabwe road. There were more than 10 uniformed cops and three plain-clothed men whom we suspected were CIO and PISI (police internal security intelligence) operatives. The roadblock checked our vehicles, but we later realised that they were obsessed with people’s identities,” a senior MDC Alliance official who witnessed the events said.

“At Nemanwa area, we saw a Toyota V6 and realised its occupants were communicating with attackers ambushing us. This was a well-planned thing involving various security sector actors and the ruling party.”

A resident of Nemanwa said most of the people who attacked Chamisa’s convoy were bussed from Masvingo city, Masvingo West and other outside areas except a few, who include village head Nhamoinesu Nemanwa who was the ring-leader.

On Tuesday, Chamisa visited Chiredzi using the Chivi-Ngundu route. At Triangle, Zanu PF had mounted a roadblock, but sources said police refused to put endorse the roadblock, making it difficult for placard-waving ruling party militants to stop the convoy.

Others involved were businessman Jameson Charumbira who bought fast-food Chicken Inn meals for the youths and Felix Bhangu who was driving the truck carrying the youths and their leaders.

Moyo said he sponsored the demonstration in a bid to urge Chamisa to remove sanctions which are affecting the country. He said he would not regret taking part in the protests, which he claimed were peaceful.

“It is true that I participated in the demonstration against Chamisa’s visit to Chiredzi on Tuesday. What we wanted was to urge the opposition leader to call for the removal of sanctions which are affecting the country,” Moyo said.

Moyo, who was the lowveld town’s chairperson from 2013 to 2017, courted controversy in 2017 after the local authority sold him a Toyota Hilux twin-cab vehicle for ZW$4 000 in a move which was resisted by residents. The vehicle was involved in a high-speed chase against Chamisa’s convoy on Tuesday.

On Wednesday, Chamisa visited Zaka where armed police officers besieged the home of Misheck Marava, the opposition party’s provincial chairperson. In 2002, Marava lost more than 10 cattle to Zanu PF youths after he ran from home fearing for his life.

While Zanu PF’sponsored mayhem heralded the looming violence ahead of the 2023 general election, they also betrayed desperation and fuelled Chamisa’s popularity — the sort of push the MDC Alliance leader needed after being criticised for lethargy.

Related Topics:MDCZanu PF
Up Next