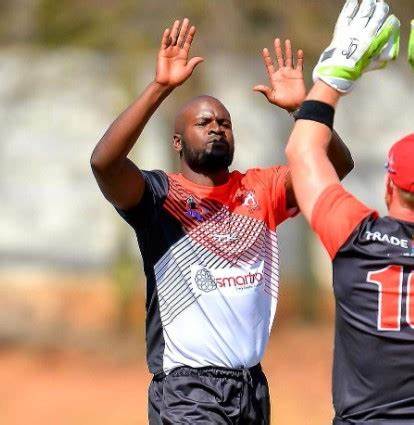 A FAST bowler said to be capable of bowling in excess of 140km per hour – Tanaka Chivanga – has been named in Zimbabwe’s squad for the upcoming Twenty20 International series against red-hot Pakistan, who landed in Harare on Saturday following the South African leg of their Africa tour.

The uncapped 28-year-old quick is relatively unknown by his home country’s fans, but has won quite a reputation for himself in South Africa’s Gauteng Premier League, where he took 108 wickets for Johannesburg club Delfos CC since 2017.

Chivanga’s call-up by Zimbabwe could be an exciting prospect for a team lacking bowlers with ability to bowl express pace.

Tall and well-built, Chivanga has been described by a respected United Kingdom-based agency, World Sports Xchange, as “one of the most dreaded opponents” on the Gauteng club cricket circuit.

“His tall frame and heavy ball have seen some of the best club cricketers in Johannesburg hopping around in their creases,” wrote World Sports Xchange on their website, further describing the right-armer as a “genuine spearhead.”

Also a handy lower-order batsman, Chivanga was part of the Lions Academy in South Africa for two years.

Meanwhile, batting kingpins Brendan Taylor and Craig Ervine make a return to the side after illness ruled both out of Zimbabwe’s Test and T20I contests with Afghanistan in the United Arab Emirates last month.

Conspicuous by his absence from the squad is Zimbabwe’s white-ball captain, Chamu Chibhabha, who also did not tour the UAE.

Also not selected is the injured batting all-rounder Sikandar Raza as well as pace bowler Kyle Jarvis, who is battling to return to full fitness.

Test skipper Sean Williams, who captained Zimbabwe in both formats against the Afghans, will continue to lead the side in all matches during Chibhabha’s absence.

Zimbabwe and Pakistan clash in three T20Is on 21, 23 and 25 April at Harare Sports Club before the two sides meet in a two-match Test series at the same venue.

‘Too small, too weak’: words that created a giant