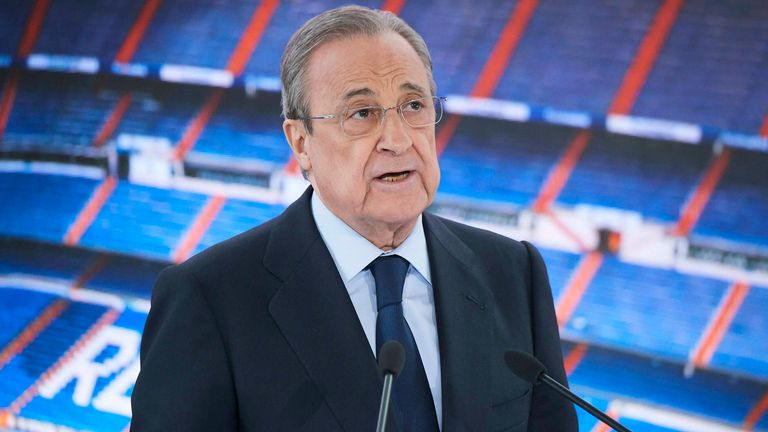 THE power of football supporters was clear on Tuesday as Chelsea fans gathered outside Stamford Bridge to protest against their club signing up to play in the ESL.

The European Super League is on “standby” despite nine of the 12 founding teams withdrawing, says Real Madrid president Florentino Perez.

After a furious backlash against the proposed tournament that was announced on Sunday, all six Premier League clubs involved withdrew on Tuesday.

Real Madrid, Barcelona and Juventus have not withdrawn, although Juventus chairman Andrea Agnelli said the project could not now proceed.

Javier Tebas, president of Spain’s La Liga, said: “If it [the Super League] was good for football, as Perez has said, they wouldn’t have done it behind our backs.”

On whether their would be sanctions from La Liga for the Spanish clubs, he added: “We are not talking about sanctions.

“Everyone wants to cut people’s heads off. We have to have a procedure and we have to see how it looks in the end. These clubs have been sanctioned by their own fans.”

Speaking on the El Larguero show on Spanish radio station Cadena Ser, Super League chairman Perez claimed the project was not yet dead as all 12 clubs “have not left yet”.

“You cannot get out of the contract like this – they are binding contracts,” he added.

When asked what the penalty was for leaving the project, Perez did not answer.

Perez reiterated his view that the ESL was created “to save football”, having also previously said the move had been made because young people were “no longer interested in football” because of “a lot of poor quality games”.

He added he was “sad and disappointed” by the reaction to the project, which the clubs have been working on “for around three years”.

He accused Uefa president Aleksander Ceferin and various countries’ footballing authorities of “aggression” and “threats” towards the ESL.

“Maybe we didn’t explain it well, but they also didn’t give us an opportunity to explain it,” said the 74-year-old.

A revamped 36-team Champions League, starting in 2024, was agreed on Monday, although the ESL teams had said in its announcement of Sunday it did not think Uefa’s reforms went far enough.

“The Champions League format is old and only interesting from the quarter-finals onwards,” said Perez.

“This format clearly doesn’t work, so we thought that we could have a format where the most important teams in Europe play against each other from the very beginning of the season.

“We worked out the numbers and felt we could make much more money, more money for all the other teams too.”

Perez also claimed one of English football’s ‘big six’ – Arsenal, Chelsea, Liverpool, Manchester City, Manchester United and Tottenham – were reluctant about the ESL from the start.

“There was someone in the English group that didn’t have much interest, I won’t say who,” he said.

“That began to infect others, who are also people of an age, and who are perhaps afraid because they did not understand anything of what was happening.

“We all signed a binding agreement, but I think one was never very convinced.”

Analysis
Spanish football expert Guillem Balague on BBC Radio 5 Live
Perez has got a vision and apparently the rest of the world is not seeing it and that’s dangerous when someone feels like that.

He kept saying, in his second appearance in a disastrous PR campaign, that he’s there to save football.
He’s talking about big losses – in the case of Real Madrid, they’ve gone from expecting to earn 900m euros (£779m) to 600m euros (£519m) in only one season, and that stops them doing a lot of their projects, like maybe signing Kylian Mbappe from Paris St-Germain.

In Spain, we are a completely different type of fan. We don’t act against things we think are unfair. In England, it is more like a lifestyle. They are taking something off you and you go out to try to get it back.
Perez has been untouchable for many years. But this vision did not really have strong foundations so the media are having a bit of a laugh here.

We are all very surprised Joan Laporta and Barcelona have not come out and pushed away from this idea. But, they are so desperate for money that they think whoever comes up with the right idea, they will just join in.

We are a little bit disappointed by the leaders of the two biggest clubs in Spain.
Attempts to curtail ‘big six’ influence.

Senior executives from the Premier League clubs who were part of the ESL are being asked to stand down from various league working groups – or face being voted out by the 14 other clubs, reports BBC sports editor Dan Roan.

In a move that suggests the ‘big six’ influence is set to be curtailed, the Premier League is in the process of writing to; outgoing Manchester United executive vice-chairman Ed Woodward and Liverpool chair Tom Werner, who sit on the league’s broadcast advisory group; Chelsea chairman Bruce Buck, who is on the audit and remuneration committee; and Arsenal chief executive Vinai Venkatesham and Manchester City’s chief executive Ferran Soriano, who are on the league’s club strategic advisory group.
—BBC Sport

A winter of hope and expectation