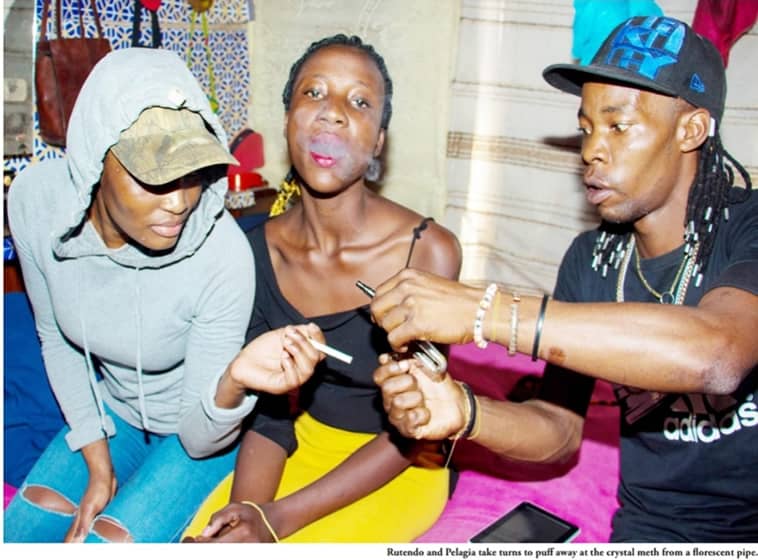 WHEN marauding knife-wielding drug peddlers besieged Precious Sithole’s house in the wee hours of the morning last week in Zengeza, Chitungwiza, about 20 kilometres from central Harare, the mother of two feared for the worst.

Seeing that her life was in danger, she immediately broke her bedroom window and sought refuge at a neighbour’s house.

Demanding to see Sithole’s daughter, Pellagia, the drug peddlers, going by the moniker Maganvosta, broke into Sithole’s living room, threatening to kill anyone in the house.

Those who could not escape were terrorised by the marauding group and forced to sing songs.

One of the gang members, a self-professed prophet, ordered women in Sithole’s house to pray facing the East, insisting there was a man waiting to hear their prayers.

Terrified, Sithole mobilised men in the neighbourhood, who eventually chased the knife-wielding drug peddlers at the crack of dawn.

The drug dealers have been hunting for Pellagia (19) for weeks. They fear that Pellagia may divulge sensitive information to the police on drug dens selling crystal meth dotted across the township.

Until she professed her desire to change, the 19-year-old had been a critical part of their crystal meth racket in Chitungwiza.

“She does not want to do drugs anymore. She is also terrified,” Sithole said.
She recounted her near-death experience.

“Those hooligans came here days ago with knives demanding to see her. I had to escape through the window because it was tense. I was scared. I warned my daughter that if she goes out there, she will be killed,” Sithole told The NewsHawks.

Drug peddlers are terrorising residents, robbing innocent civilians while threatening families with death. Countless attempts to get them arrested have failed as police are reluctant to bring the perpetrators to book.

Families here believe the police are part of the drug racket, amid allegations that they also receive bribes to protect the gangs terrorising citizens.

Seeing that her friend Tamar (16) had successfully completed her detoxification and was on the mend, Pellagia checked in for rehabilitation in June. However, she quit and demanded to return home.

Since returning home, the 19-year-old mother of one has been hooked on crystal meth, also known as mutoriro in street lingo.

Known scientifically as methamphetamine, crystal meth is a highly addictive stimulant and users love the drug for its powerful euphoric qualities. Addictive on first smoke, the drug has become a crippling vice for the country’s youths, who take the illegal substance to escape from daily troubles. Also known as dombo, buwe, guka makafela in street lingo, the infamous drug has destroyed lives across the country’s townships.

The 19-year-old has been hooked on to the drug since last year and is used to entice male customers. Pellagia is also used as bait for robbery victims, as the ganvostas terrorise residents.

“Pellagia was married, but got mixed with the wrong crowd last year. This is what got her into drugs. She left her husband and started spending time with hooligans in drug houses,” Sithole said.

Whenever she gets high, Pellagia dumps her baby anywhere. The baby is often found by passers-by, cold and hungry.

“She has changed, I am very worried. She spent two months away from home and just came back three days ago. When she came, she came back with a criminal who says Pellagia is being used by drug lords to rob innocent men.”

Sithole was relieved that the marauding gang had been arrested. “I hear the gangsters were arrested and I hope they remain in custody because they do not stay long in prison,” Sithole said.

“I fear that they may come and attack us or burn our house. They think that Pellagia is selling them out because she knows all the drug houses.”

“We just hope that Pellagia finds a safe house to hide. She believes they will kill her,” she added.

Sithole bemoaned drug abuse in Chitungwiza, calling upon the authorities to act swiftly to save the situation.

“Many young people are now doing drugs here. They do not sleep; they spend the whole night doing drugs. We want the police help us shut down these drug houses. They should all be arrested,” she said.

While Zimbabwe, like many other countries the world over, is concentrating on fighting the Covid-19 pandemic, an equally deadly but silent epidemic has been on the prowl, causing untold suffering to families as it threatens entire communities.

The abuse of crystal meth and other deadly substances has become so rampant among youths across the country’s townships, driving mental illness, violence, and premature deaths, among other problems.

To fund the deadly but expensive vice, youths have been engaging in petty theft, stealing home appliances for sale.

“She just steals things for sale, our personal stuff is no longer safe here,” Phelomena Ndumbu (20), Pellagia’s older sister, said. She added that there are more girls involved in abusing mutoriro in Chitungwiza.

“There are a lot of girls who are now into drugs in Chitungwiza, and it is scary. I never tried drugs because I saw the results of drugs. they do not bath anymore, it is a mess,” she said.

With no prospects of employment due to unrelenting economic problems, youths in the townships have turned to drug abuse to evade daily hardships.

Zimbabwe has nearly 90% formal unemployment and youths constitute the bulk of the jobless in the country. Years of bad governance, successive droughts and, more recently, the outbreak of Covid-19 have worsened the economic situation, resulting in massive job cuts.

Drug abuse has been blamed largely on idleness and lack of economic opportunities for youths in the townships. Experts have warned that Zimbabwe risks losing a generation to substance abuse.

According to the latest Zimbabwe National Drug Master Plan, the government has adopted both an integrated and comprehensive approach that will address a range of drug-related issues.

These include illicit and licit drugs. Critics however doubt that most targets will be achieved.

“Currently, approximately 60% of patients admitted in mental health institutions suffer due to drug-related problems,” the report reads in part.

Even those who want to break off the crippling vice have found it difficult to find help, as Zimbabwe has no public rehabilitation centres.

The available private rehabilitation centres are beyond the reach of poor families in the townships. However, there are hopes that Zimbabwe’s drug problem would soon be a thing of the past after the government set up a taskforce to fight the scourge. It remains to be seen whether the programme will be successful or it is another political ruse.