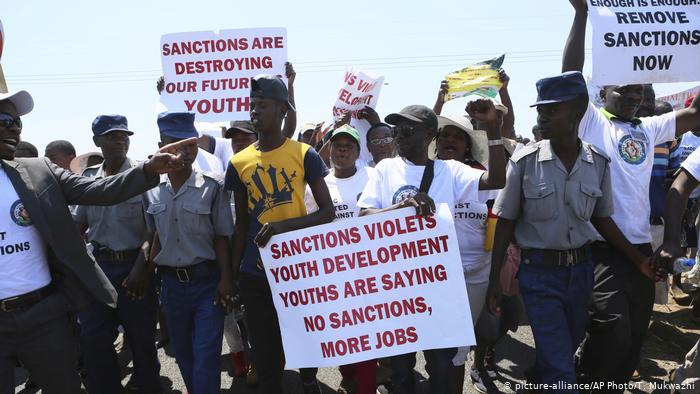 The United Nations Special Rapporteur on the negative impact of unilateral coercive measures on the enjoyment of fundamental human rights and freedoms, Alena Douhan, is currently on a 10-day visit to Zimbabwe at the invitation of the government which has been reeling from the effects of sanctions for two decades now.

What this visit seeks to ascertain, through engagement and dialogue with relevant stakeholders, is whether and to what extent the imposition, as well as the continued application of sanctions in the country encroaches upon the basic human rights of Zimbabwe’s citizenry in general as well as whether the adoption and implementation of such measures is violative of international human rights instruments and standards in particular. In essence: are sanctions the bane and root cause of the country’s woes?

Secondly, in the assessment of restrictive measures (adopted by the US, the UK and the EU)  what falls to be determined, pursuant to the mandate of the Special Rapporteur, is whether these countries, in adopting and implementing these measures, have sought to subordinate Zimbabwe in the exercise of its sovereign rights and to secure from it advantages of any kind.

The position of the Zimbabwean government is that far from the position that sanctions are being ring-fenced and targeted at a few individuals,  the tight grip of the declared and undeclared sanctions is, instead, being felt throughout the economy.

It cites the debilitating effect on the country’s economy, the high unemployment rate, failure to expand infrastructure, high incidence of poverty, HIV and Aids, and low life expectancy as some of the examples of the negative effects of sanctions. The government ultimately concludes that the sanctions are out of date and irrelevant to the situation that prevails in Zimbabwe in view of  the new dispensation thrust on engagement and re-engagement and accordingly calls for their immediate removal in order to allow the country to move forward.

This position finds support in a 24 March 2017 United Nations Human Rights Council resolution which emphasises the long-term adverse effects of unilateral coercive measures. It highlights, in particular, the ensuing  socio-economic problems and humanitarian concerns that proceed to arise in the targeted states.

It is worth noting, however, that the special rapporteur’s visit could not have arrived at a more politically charged time in Zimbabwe as the country gears for the 2023 presidential election. The ruling Zanu PF is already in full campaign swing, with President Emmerson Mnangagwa, (whose party has the advantage of enjoying close proximity to state resources), subtly launching his 2023 campaign on 7 October while delivering his State of the Nation Address.

On the opposite spectrum, civil society organisations, human rights defenders and opposition political parties have repeatedly maintained that sanctions are not the source of the country’s ailments and cite, instead, the severe lack of genuine political will on the part of the government to implement reforms that are reflective of a commitment to respect, protect and promote human rights, democracy, good governance and the rule of law. A plausible question can thus be raised as to whether the renouncing of sanctions is a political ploy surreptitiously designed to detract attention from the shortcomings of the Zimbabwean government.

In reverting to the two-stage analysis mentioned earlier, it is worth mentioning that Zimbabwe is among a number of nations with poor human rights, democracy and corruption records that have consistently lobbied against the imposition of unilateral coercive measures. Attention is hereby drawn to Venezuela, which has faced increasing authoritarianism since 2013 under President Nicolas Maduro.

Yet, in August 2021 this year, Maduro engaged in a dialogue process with opposition figures to call for the lifting of US sanctions which he described as “an economic siege” on his country. Similarly, Zimbabwe, on objective assessment, is reckoned to be one of the most undemocratic, corrupt and fragile states in the world. According to the Fragile States Index (FSI), Zimbabwe is ranked the 10th most fragile country out of 178 nations, and it is not apparent that this invidious position is due to sanctions. What now falls to be determined is whether the conduct of the Zimbabwean government towards its citizens has been one of general goodwill and respect for their basic human rights in general.

Specific reference is made to the 1 August 2018 post-election massacre wherein six people were killed and more than 60 brutally assaulted following the deployment of the army to deal with protests. The conduct of the Zimbabwean government in this instance, in giving the Zimbabwe National Army (ZNA) carte blanche to interfere in civilian affairs, violated citizens’ rights to life; to freedom and security of the person, and to bodily and psychological integrity; which includes the right to be free from all forms of violence either from public or private sources, as well as freedom of assembly and association. One would be hard pressed to establish a direct or causal nexus between the conduct of the ZNA in this instance and the adoption of unilateral restrictive measures in Zimbabwe.

Further, reference is made to the abduction of opposition figures such as the MDC Alliance trio of Joanah Mamombe, Netsai Marova and Cecilia Chimbiri who were abducted on 13 May 2020 near Warren Park, Harare and were later found dumped in Bindura on 15 May 2020 with injuries covering their bodies.

The Zimbabwe Human Rights NGO Forum has also noted an escalation in instances of organised violence and torture which have manifested in the silencing of perceived voices of political dissent through arbitrary arrests as well as protracted pretrial incarceration processes often characterised by the denial of bail.

This has been seen through the arrests of Allan Moyo, Takudzwa Ngadziore and Makomborero Haruzivishe to cite a few. Recent incidents of intra-party political violence that have been reported in Masvingo province are also cause for concern. The narrowing of democratic space through restriction of political participation of certain opposition figures violates civil and political rights expressed in Zimbabwe’s 2013 constitution which include the right to protest peacefully as well as the right to campaign freely. Again, it is difficult to pinpoint how this lamentable state of affairs is attributable to the adoption of sanctions in the country.

In assessing the implementation of these restrictive measures, it can be found that the US imposition of legislative sanctions through the Zimbabwe Democracy and Economy Recovery Act (Zidera), which is unilateral in nature, restricts the granting of debt relief or multilateral financing to Zimbabwe until the government makes specific electoral and economic reforms.

These include restoration of the rule of law, free and fair elections and a sustained commitment to reforming Zimbabwe’s economy. What is clear from the conditions prescribed under Zidera is that the US seeks to do nothing more than support the citizens of Zimbabwe in restoring human rights, good governance and legitimate elections.

After the enactment of Zidera, the EU imposed its own set of sanctions in 2002 after a breakdown in consultations under the “Cotonou Agreement”. In terms of the agreement, the EU instituted a political dialogue in 2001 over breaches of human rights and the land appropriations in Zimbabwe.

In terms of Article 9, it was a requirement to respect  human rights, democratic principles, and the rule of law. The Zimbabwean government failed to take any substantive measures for reform. Article 96(2)(c) of the Cotonou Agreement was then activated under which the European bloc could impose appropriate measures against Zimbabwe. This included a travel ban on persons who engage in serious violations of human rights and of the freedom of opinion, of association and of peaceful assembly in Zimbabwe, and a freezing of their funds, other financial assets, or economic resources.

Significantly, the EU and its member states have provided significant humanitarian and development assistance to Zimbabwe, amounting to approximately US$1.7 billion since 2002. Again, and like the US, it appears that the restrictive conditions imposed on Zimbabwe and Zimbabwean entities and individuals have been matched by continued support to the people of Zimbabwe.

The scale of the assistance suggests that those applying the measures have neither sought to trammel Zimbabwe’s sovereignty nor take advantage of Zimbabwe.

Thus, it can be argued with some conviction that the response of various governments and international bodies to take measures against the Zimbabwe government, governmental institutions and officials and others might well be unilateral, but they are not without justification. It is not evident that they are coercive or infringe the human rights of Zimbabweans.

Furthermore, all the measures are based on conditions that will be removed if the Zimbabwean government would simply ensure the rule of law, respect for human rights and good governance: these are the conditions expected of every member state of the United Nations.

Without expressly calling for the removal of the restrictive measures, it can be contended that unilateral restrictive measures should instead be subjected to robust monitoring mechanisms to continue to ascertain whether the reasons for the imposition of the measures are justified and that the measures are targeted, necessary and proportionate, and do not violate human rights. In the meantime, Douhan’s visit continues.

The outcome of her fact-finding mission remains to be seen, in particular whether this truly will be the last Zimbabweans will hear of sanctions.

*About the writer: Chiedza Mlingwa is a researcher at the Zimbabwe Human Rights NGO Forum who has a strong passion for constitutionalism, human rights research and advocacy.

How I salvaged my life from drug addiction: Difficult, but possible