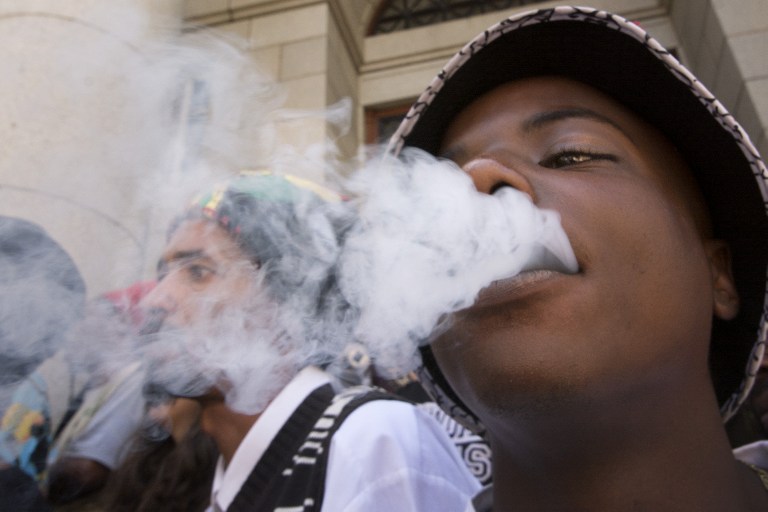 A man smokes a marijuana cigarette as about 100 Rastafarians and other members of the public sing and dance outside the Cape Town High Court in support of a court application to decriminalise dagga (marijuana/cannabis) on December 7, 2015 in the Cape Town centre. This case is one of several legal actions actions taking place around marijuana, including decriminalising hemp, used for making cloth, and various marijuana extracts used medicinally. / AFP PHOTO / RODGER BOSCH

TEACHERS have raised the alarm on rampant drug abuse among pupils as a crisis gains momentum in schools which have become part of a new wave of illicit substances.

Progressive Teachers’ Union of Zimbabwe (PTUZ) secretary-general Raymond Majongwe said schools have become a haven for dangerous drugs like marijuana, crystal meth known as “mutoriro” or “guka” and other narcotics.

Coupled with sex in schools, among other vices, Majongwe said society is in danger of moral decadence.

“It is sad that teachers have become disempowered. Government and parents connived to say kids should not be disciplined. Schools are the mirrors of society,” Majongwe said.

He also blamed drug lords for pushing contraband in schools saying: “They are making a living out these drugs. They are making money out of our children.”

Drugs like crystal meth, widely known as “mutoriro” in street lingo, cannabis cakes and other dangerous substances have found their way into schools, sparking yet another crisis.

Zimbabwe re-opened schools in early May and parents had pinned their hopes on the resumption of the school calendar to deal with redundancy precipitated by Covid-19 lockdowns over the past two years, which had led many scholars into drugs.

But parents have another crisis on their hands as the drugs are now being peddled in schools.

Disguised as muffins, ganja cakes are also being sold in schools by some children working with drug syndicates which have terrorised townships, setting up bases flooding the market with dangerous narcotics.

Mutoriro has also become popular in schools since they re-opened, according to Mubatirapamwe, a local NGO working with communities around Harare.

In Kambuzuma, parents have reported cases of drug abuse among their children who are now in the habit of skipping school to sniff the dangerous substances.

In Bindura and Guruve, in Mashonaland Central province, a dangerous beer called “Tumbwa” has ravaged lives.

The brew is disguised in freezit packaging, with parents fearing the dangerous homemade whiskey will be sold in schools.

Following The NewsHawk’s series of reports on the scourge of drugs, the government set up an inter-ministerial taskforce last year.

However, little has been achieved since the taskforce was appointed, with Zimbabwe now risking losing an entire generation to drugs.

Drug peddlers had found new avenues to push their contraband and schools have become easy targets.

The president of the Amalgamated Rural Teachers’ Union of Zimbabwe, Obert Masaure, said the Covid-19 lockdowns had worsened the use of drugs.

“Indeed, our schools are seized with the issue of drugs, and this will lead to other forms of indiscipline, such as teen pregnancies. We also have the issue of violence which is on the rise. The proliferation of drugs can be attributed to the long closure of schools; they [children] ended up doing drugs,” he said.

He also blamed the redundance of pupils during teacher strikes for the proliferation of drug use in schools.

“Sometime teachers are not even teaching, so children end up doing drugs. When children are idle, they end up in harmful practices and government should do more to step in and help these learners. Most learners never recovered post-lockdown,” he said.

“We need better methods of enhancing discipline in schools.

“Several schools have reached out to us and it’s enough evidence that substance and drug use has reached alarming levels,” she said.

The non-governmental organisation has embarked on anti-drug seminars.

“As such, Mubatirapamwe Trust is conducting preventative education trainings on drug/substance abuse in educational institutions. The school outreach programmes are aimed at assisting students in recognizing internal pressures such as anxiety and stress, as well as external pressures such as peer attitudes and advertising, that influence them to engage in substance and drug use,” she said.