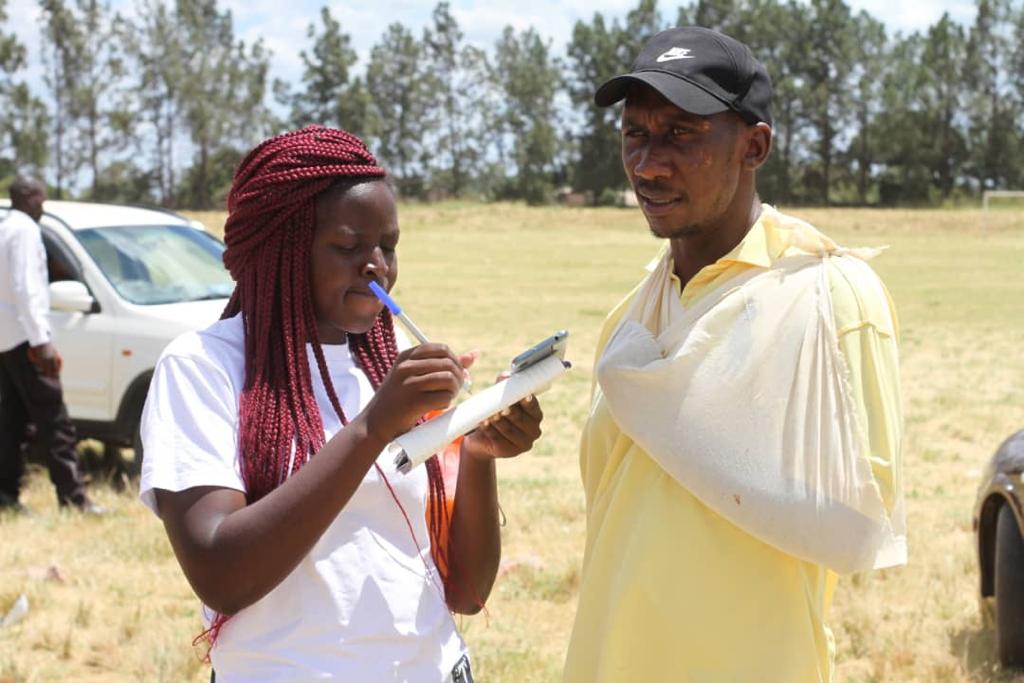 Misheck Chikwinya (39) limps from a vehicle parked behind the terraces at Mkoba Stadium, where the opposition Citizens’ Coalition for Change (CCC) is having its rally. His fractured and heavily bandaged hand is supported by a sling but the discomfort is evident to all.

As Chikwinya walks towards the venue of the rally, he is stopped by some party supporters who ask after his wellbeing. In his croaky voice, he assures the concerned friends that he is in a better place than he was a week ago.

He is one of 17 people who were badly injured at the CCC rally in Kwekwe, when marauding Zanu PF youths armed with stones, machetes,  spears and iron bars attacked opposition supporters who were gathered at Section 4 shopping centre.

A CCC supporter, Mboneni Ncube, was killed in the attack, after being stabbed with a sharp object believed to be a spear.

Besides a broken arm, he suffered head and neck injuries. His picture went viral on social media after the attack, making him the face of the barbaric attacks.

Chikwinya says he left the venue to seek refreshments at a nearby bar, but he was attacked as he left the bar going back to the venue.

“At 1420hrs, thereabout, we left for the venue as we were anticipating the (CCC) president’s arrival. Just as we turned to arrive at the venue, I was hit by a stone. At first, I didn’t understand what was happening so I tried to get up and I was hit by another stone as well,” he says.

“I remember being pushed down by quite a number of people who had iron bars. They started assaulting me, especially on the head, as you can see. I had to use my hands to protect my head.

That is how I got some of my fingers damaged. While I was on the ground covering my face and head, they started assaulting me with logs on my shoulders.

“It happened for a moment then I was left on the ground that is when I picked myself up. I realised I had no shoes, I had no phone. So, I managed to find another pair of shoes, the phones were gone. I walked towards the venue that is where I found Red Cross people who bandaged my face. Since I could no longer feel my hands, I could not do anything with them.”

Despite the brutal attack and the fact that he was still nursing injuries, Chikwinya was among the thousands of people who attended the CCC rally in Kwekwe on Sunday.

He says nothing will stop him as he strongly believes in the change agenda.

“I have come too far to quit now. I lost my late teenage years by dedicating it to the movement. The yellow movement is a breath of fresh air. It has revived my hopes and spirit for a new Zimbabwe,” Chikwinya says.

“It has come at a time when the country is in a mess, both old and young see the formation of the yellow movement as an opportunity to take the situation into their own hands.”

Chikwinya had travelled about 60km from Gweru to attend the rally in Kwekwe, only to leave the party gathering on a stretcher enroute to Topomasi Hospital.

He was discharged from hospital on Wednesday, three days after the violence.

He says there was no way he would absent himself from the Gweru rally despite being a victim of violence.

“There was no way I would miss this rally, this is my home turf. This is where my career into mainstream politics started. I had to be here,” he said.

Chikwinya says he has been working with the opposition for a long time as a security detsil at rallies and other party programmes.

He says this is the first time he had fallen victim to political violence despite having been involved in politics for many years.

“There were small incidents here and there but never of this magnitude. It was not like a planned terror attack like we experienced in Kwekwe,” he said.

Violence from political intolerance has been a common feature in the Midlands province which is home to a Zanu PF-linked terror gang called Al-Shabaab. The terror group has also been wreaking havoc in the Midlands’ gold fields.

CCC’s acting organiser and member of Parliament candidate for Mkoba in the upcoming by- elections, Amos Chibaya, told The NewsHawks that the Kwekwe attack had resulted in the tightening of security at the party’s rallies, including at the Gweru rally.

“We are a non-violent party and we have chosen a stadium today so that we can closely monitor who gets in and who gets out. We have tightened security to search for weapons to avoid violence,” he said.

Members of CCC have been subjected to violence from the state and the ruling party.

On 26 January, a few days after the party was launched, five men were beaten by police and detained for 24 hours for allegedly wearing yellow T-shirts in town.

In Masvingo, 13 were detained for a similar “offence” but were later released.

Kuwadzana East seat up for grabs