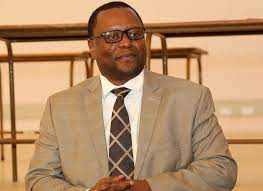 AN an urgent High Court application filed on 23 July, National University of Science and Technology lecturer Zephaniah Dlamini, who is in a partnership with Osisa director Siphosami Malunga and businessman Charles Moyo, sought an an order reversing the acquisition of Kershelmar Farm in Nyamandlovu near Bulawayo.

Dlamini, in his founding affidavit filed through Webb, Low and Barry, as well as Ben Baron and Partners, fingered state security agency deputy director-general Gatsha Mazithulela (pictured) as being responsible for the acquisition of Kershelmar Farm and parcelling it out to his subordinates.

You don’t have a farm offer letter: Minister

LANDS and Agriculture minister Anxious Masuka has accused Osisa director Siphosami Malunga and his business partners of failing to exhaust “internal remedies” in challenging the acquisition of their farm in Nyamandlovu near Bulawayo.

In his opposing papers filed on 27 August against a High Court application by Malunga and his partners Charles Moyo and Zephania Dlamini challenging the acquisition of their Kershelmar Farm, Masuka said the latter’s court challenge should be dismissed with costs as a result.

Masuka filed his papers through the Civil Division of the Attorney-General’s office, arguing the trio should have exhausted available channels to contest the seizure of their farm.

ZIMBABWE’S Central Intelligence Organisation deputy director-general Gatsha Mazithulela has accused government critic and human rights lawyer Siphosami Malunga and his business associates of being “fraudsters” and “squatters” at their Kershelmar Farm in Nyamandlovu that has been gazetted for acquisition.

In his opposing papers filed at the High Court in Bulawayo on 30 August through his lawyers Mlotshwa and Maguwudze Legal Practitioners, Mazithulela dismissed the farm purchase by Malunga and his partners as fraudulent, and hence void, before launching an astonishing personal attack on Malunga.

He asked the court to dismiss the applicants’ application with costs on a higher legal practitioner and client scale.