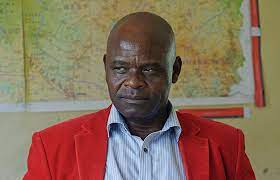 BLESSING Chebundo (pictured) was known in MDC circles and indeed throughout the country as Emmerson Mnangagwa’s political nemesis.

At a time when Mnangagwa was seen as the political godfather of the Midlands region as well as an untouchable and ruthless heavyweight, the then little-known Chebundo humiliated Zanu PF’s much-vaunted “crocodile” in the race for the Kwekwe Central National  Assembly seat in 2000.

Chebundo repeated the feat in the 2005 general elections, prompting Mnangagwa to abandon any hope of ever winning the constituency.

Wounded and with his pride having taken a battering, Mnangagwa disappeared from Kwekwe Central and resurfaced in Chirumanzu-Zibagwe constituency where he became MP after the 2008 harmonised elections.

It therefore became a surprise and a major talking point when Chebundo abandoned opposition politics and joined Zanu PF in February this year.

Chebundo, who has since graduated from Zanu PF’s Herbert Chitepo School of Ideology, told The NewsHawks that crossing the floor was difficult and required deep soul-searching.

He said he made the decision to abandon ship after getting frustrated with the leadership deficit in the MDC formations after the death of former prime minister Morgan Tsvangirai.

“Since the MDC president (Tsvangirai) left to be with his maker in February 2018, things went bad for the MDC family, in all its forms, and formations. The party gradually became like a ‘shadow of its former self’. The new centre failed, dismally, to hold. Things went bad immediately after Tsvangirai’s death,” Chebundo said.

“If honesty is to be respected, it’s justified to say that the party gradually became directionless and shapeless. It lacked cohesion. It has leadership that is aloft in oratory rhetoric, but with serious deficits in wisdom and strategy.”
Chebundo, without mentioning names, said he was frustrated because the current leadership was “non-receptive to advice”.

“Unfortunately for many ordinary democratic citizens and others who are limited to seeing things from outside the party, it is like admiring the looks of an attractive/shining pumpkin from outside: oblivious of the carcinogenicity inner situation,” he said.

“One-and-a-half years post Tsvangirai’s departure, you could not tell whether the party was going, or static, or coming back. The party lost compass and has no end game plan whatsoever.”

“I interrogated the reasons that we formed MDC in the first instance with Tsvangirai and others. I interrogated the last vision of MRT (Tsvangirai) in 2017 as people supported the ‘restore legacy’ move. I contrasted the policies and conduct of the first republic’s 37 years versus the second republic. I asked myself that isn’t what is being pursued by the latter in line with our 1999 MDC agenda, notwithstanding that not everything has changed, but it is the course of plans and action being put in place, and the achievements so far, that are worth giving a chance and supporting,” Chebundo said.

Chebundo also said he was not new to Zanu PF politics.

“My first test of politics was the period immediately before and post-election 1980 that ushered in a black majority government. As a very young man, I took interest in being actively involved in the revolutionary Zanu PF  political organisation. People (those who were there in 1980) should not fool others to say, they have never been Zanu PF or PF Zapu etc. The truth is, the majority of people who were 18 and above in 1980, with the enthusiasm for liberation, one was either Zanu PF and/or PF Zapu. Very few were otherwise.  I had always supported  the cause of the Chimurenga war,” Chebundo said.

“Besides, my fiancée ‘Alice Katsande’ had joined the liberation war from her border home of Mutoko. I had also contemplated that I would one day join the war front. It so happened that when the efforts to bring together the warring organisations to Lancaster House, and talks began in ernest,  I became more practically alive to active involvement under the internal supporting groups, and in Kwekwe, Midlands, as led by senior members such as those I worked with at Sable Chemical Industries, the likes of Cde Chaunouta and others, who later attended the Lancaster talks, and were to subsequently became our first black elected public office bearers, Kwekwe Mayors etc.

“Just to make it clear from the onset, I was an active cadre of the revolutionary Zanu PF party in Kwekwe immediately prior to the 1980 elections that ushered in majority rule. Soon after the elections, and inspired by my youthful age, I became the vice-secretary for Zanu PF Gutsaruzhinji district’s main wing in Amaveni, Kwekwe, following the first party structuring exercise,” he said.
— STAFF WRITER.

The Last Chance For Zimbabwe’s ConCourt