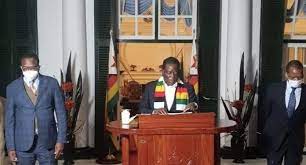 EXASPERATED over destabilising currency and exchange rate volatility and resurgent skyhigh inflation, which have seen prices scale the stratosphere, while stoking social unrest, government is cracking down on big corporates accused of borrowing for arbitrage and massive profits.

Industry sources say before announcing a series of fiscal and monetary measures to contain money supply last week on Saturday, President Emmerson Mnangagwa engaged Finance minister Mthuli Ncube and Reserve Bank of Zimbabwe governor John Mangudya before summoning a couple of business executives — including those from top listed companies — for a tongue-lashing over their credit portfolios which runs into billions partly for black market deals to reap profits of the underworld.

“Arbitrage is the proverbial sure bet for speculators,” a top monetary official said.

“There are serious macroeconomic underlying issues and quasi-fiscal activities such as those around agriculture and infrastructure, but the truth is big companies are also driving the market through borrowing huge sums that are used to fund their businesses, while trading in the parallel market.”

The official said: “They (corporate executives) were recently summoned by the President and hauled over the coals over currency, exchange rate, money supply and inflation issues which have thrown the economy, already in crisis, into a new downward spiral. One from the biggest light manufacturing and consumer goods production boss was directly confronted over the issue of borrowing for black market activities and exorbitant price increases. The President said big companies are fuelling money supply and driving inflation, and black market and speculative activities. Business has its own explanation, but they are cornered over borrowing billions for arbitrage and easy profits.”

Fiscal and monetary authorities say after a series of meetings last week, Mnangagwa last Saturday announced a series of interventionist measures, including suspending bank lending in a bid to stop companies which borrow money for speculation and arbitrage.

This involves buying goods and pricing them above parallel markets rates and securing hard currency to swiftly pay off their loans cheaper and stash their United States dollars stocks, while making huge profits.

“Why did government announce those measures? They are trying to deal with arbitrage by big companies, several of them listed. Currency arbitrage is a forex strategy in which a currency trader takes advantage of different spreads offered by brokers for a particular currency pair by making trades. Different spreads for a currency pair imply disparities between the bid and ask prices. It involves buying and selling currency pairs from different brokers to take advantage of the mispriced rates.

“Big local corporates and speculative borrowers with huge balance sheets are driving the exchange rate and steep currency depreciation as they make billions from arbitrage activities. Speculative borrowers are responsible for driving the exchange rate in the parallel market for their final gains and in so doing pushing unsuspecting consumers who are bearing the brunt of unjustified inflated price increases.

“By depreciating the local currency say from US$1: ZW$250 to US$1: ZW$350 to the US dollar within a month, the company or speculative borrower would have easily made an arbitrage profit of more than ZW$300 million from a loan of ZW$1 billion, for instance.

“They are minting money in both local and foreign currency. So the higher the borrowing the higher the arbitrage profits. The model is low-risk or riskless, but highly profitable at the expense of consumers and the economy. This destabilises the market and the economy. It is against this exploitation and manipulation of the financial system and abuse of the general public through stoking inflation that the executive, fiscal and monetary authorities decided to put some temporary freeze on lending to allow for sanity to prevail. It’s a suspension, hence it will be lifted when currency speculators have been contained and stability on the currency and exchange, as well as confidence have been restored.

“The deliberate and profit-driven manipulation of the exchange rate — or “burning” as they call it in street lingo — by corporates and speculators who are supposed to be responsible citizens is indiscipline of the highest order and counterproductive which should be a punishable offence under financial crimes.”

However, captains of industry while acknowledging malpractices say the black market is a product of poor policies and distortions.

“What the government is saying about borrowers and speculators is legitimate and destabilising, but the problem they don’t want to take responsibility for their own failures,” a local company chief executive said.

“They want to appear like victims whey they are the authors of these distortions. Arbitrage is not an illegal practice. It is a perfectly legitimate trading technique and could, in fact, be seen as helping to improve market efficiency. This is because, once the arbitrage opportunity has been identified and exploited, the market should begin to automatically correct itself.”

Following the measures and its meeting with bankers this week, the RBZ said: “In the wake of manipulation of the exchange rate by some borrowers of large amounts to the detriment of consumers, the (central) bank reserves the right to publish the names of significant borrowers across the banking sector in the public interest.”

Government insists it is big companies that are driving currency depreciation and the exchange rate drop, which in turn stoke inflation and destabilise the market, while leaving consumers battered by skyrocketing prices even more anxious.

Prices in Zimbabwe have of late been increasing at an alarming rate, further squeezing the people whose incomes have been eroded by resurgent inflationary pressures. Annual inflation surged to 96.4% in April of 2022, from 72.7% in March, reaching the highest since last June.

Main upward pressure came from prices of transportation (106.1% vs 84.3% in March), of which fuels and food (104% vs 75.1%), as Russia’s invasion of Ukraine has led to bread prices soaring in importing countries like Zimbabwe.

On a monthly basis, consumer prices jumped 15.5%, the most significant movement since July of 2020. In a bid to contain money supply, further exchange rate decline and rising inflation, government came up with measures which it says are expected to restore macroeconomic stability and deal with market indiscipline.

Mnangagwa said the increase in month-on-month inflation from a monthly average of 4.5% to 15.5% in April 2022 was significant. He said such an increase in domestic inflation was caused by both recent global shocks and domestic factors. In the televised speech last Saturday, Mnangagwa said domestic factors, which include the pass-through effects of the recent exchange rate depreciation on the parallel market are wreaking havoc with the economy.

“If not contained, the continued depreciation of the domestic currency against the US dollar may lead to a reversal of economic stability gains achieved since the introduction of the foreign exchange auction system in July 2020,” he said.

Mnangagwa further said his government is convinced that the recent exchange rate movements were driven by negative sentiments by economic agents as opposed to economic fundamentals. He was referring to big companies that have borrowed billions which his government accuse of using the money for speculative activities.

Fiscal and monetary authorities say as a result big corporates have been targeted over their borrowing and speculative trading activities, hence the freezing of lending, which is a dough-edged sword as it also hurts companies through unintended consequences.

While some companies are complaining about these measures, especially suspension of lending, others think they will restore macroeconomic stability, support economic recovery trajectory, boost economic confidence, increase the appeal of the local currency, preserve value for depositors and investors and deal with market indiscipline.

However, captains of industry say while it is important to deal with the situation, piecemeal measures won’t work.

“The interventions are understandable, but problem is that they are a double-edged sword; they cut both ways,” an industrialist said.

“The amount required and implementation modalities of this policy will be announced in due course guided by the Public Debt Management Act and Reserve Bank of Zimbabwe,” he said.

The other measures included clearance of foreign auction backlog, continuation of partial dollarisation (dual currency system), exchange rate management and allowing retailers and wholesalers to benchmark their pricing to the average interbank rate with a maximum allowable variance of 10%.

Related Topics:ArbitragecurrencyEconomyZimbabwe dollar
Up Next