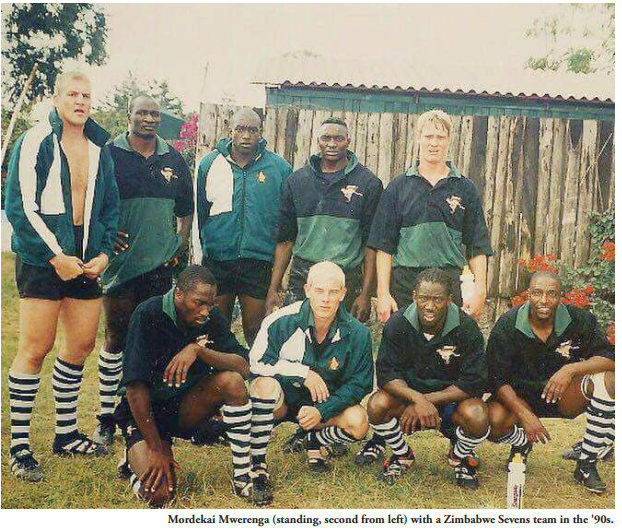 I AM hugely devasted and saddened by the tragic death of Mordekai “Bhuru” Mwerenga, who was killed last weekend in a horror car crash in Coventry, England, at the age of 47.

Mordekai grew up in Glen View in Harare, where he went to Glen View Primary School. His father was a national senior police officer who sadly passed away about a year ago.

Bhuru – his nickname because of his pitbull-like tenacity – comes from a family of five boys and two girls. Like most people who went through Prince Edward School, he arrived in a flurry, a very talented young man.

He captained the Tigers (PE’s first rugby team) of 1993, which had guys that went and really made it in senior rugby. Antony Papenfus was the flyhalf.

The late Steve Mtandwa, a fullback, would make waves as a young Under-21 player. Mbiru Gotora was the scrumhalf. And then big Ali Mhlan[1]ga, a lock, just to name but a few of the players who excelled and went on to play for Zimbabwe.

Besides captaining that team in 1993, Bhuru actually played first team basketball too. So he would have earned colours in both sports and I think a lot of people did not get how dynamic and how athletic he was. I think it was from playing basketball.

Old Hararians, back in the day, were the team to beat at junior level and I was fortunate enough to be coaching that team. Mordekai was such an intense young man on the field.

Off the field – soft-spoken, very respectful and a very good human being. Bhuru would go on to represent Zimbabwe’s national team, the Sables, and the Cheetahs (Sevens national team), which was a huge feat as normally people that play the short version of the sport find it difficult to play the 15-man game and vice-versa.

But Bhuru was prominent during those periods when we had the Australian Mark Donato coaching the Sables. What people might not be aware of is the difficulty that Mordekai went through when he went overseas.

He had contractual issues at the club that he played for up to a point that he only became good a few years later after coming out of that contract and going back to normal life with[1]out trying to be a professional rugby player.

Those early years, Mordekai would remain very humble. He was always a humble young man.  I think the highlight of his rugby was being captain of the 1993 Tigers team. For the longest time, even as we left Prince Edward, they were the first team to beat Falcon at the (National Schools) Festival.

Because Falcon always used to win that game against Prince Edward for many years, Bhuru’s efforts were appreciated.

He was just an intense young man. All of us are in shock at the moment. I know Bhuru came back home a few years ago, meeting up with his good friend Walter Dinha, who gave us a bit of background of where Bhuru came from – his humble beginnings and a lot of the times that they spent in Selous House, which was one of the hostels at Prince Edward.

You know, we say in rugby, when somebody leaves us, “we know he is playing rugby with the angels in heaven.”

We hope to see Bhuru when our turn comes. We will sincerely miss him. Our deepest condolences to his family.

He left a young family in England where he was staying. We also say nematambudziko kuna mai vari kumusha (condolences to his mother who is at the family’s rural home). Till we meet again, may his soul rest in peace.

Senegal must end Afcon as champions