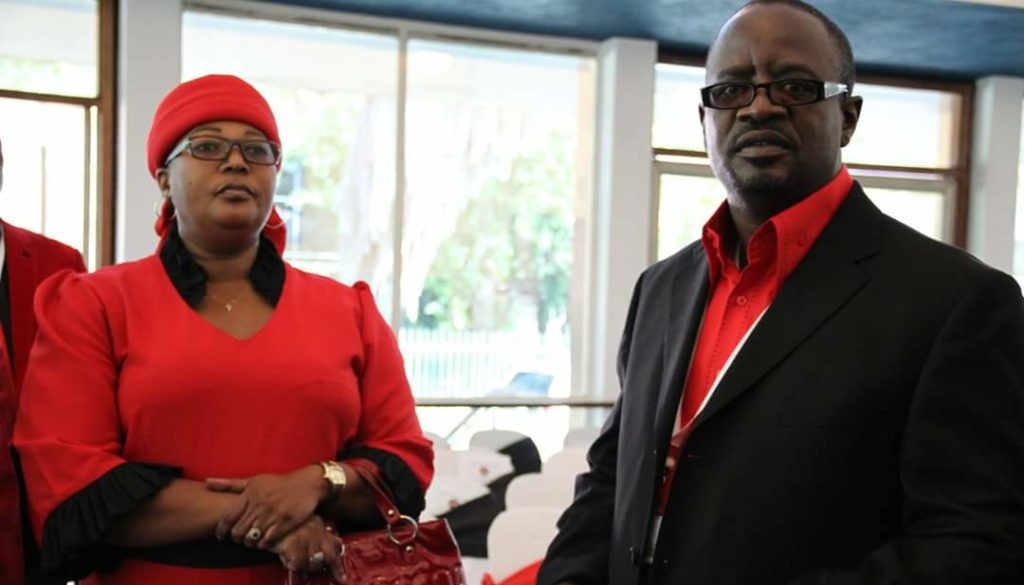 THE opposition MDC-T’s national organising secretary, Abednico Bhebhe, who was recently suspended after he exposed an alleged plot to manipulate the forthcoming extraordinary congress which is meant to choose a new leader, has approached the High Court to challenge his ouster.

In a letter dated 29 October 2020, the party’s acting president, Thokozani Khupe, accused Bhebhe (pictured with Khupe) of “acting in breach of the party’s constitution and acted in a manner inconsistent with express or implied conditions of your membership of the party.”

The letter states that during the period of suspension, Ncube shall not perform any duties as national organising secretary or visit any of the party’s offices.

A standing committee meeting recommended Bhebhe’s suspension after he sided with MDC-Alliance members Gilbert Kagodora and Nason Mamuse, who want the High Court to force Khupe to release key information about the crucial event.

Bhebhe on Wednesday filed an application for review under case number HC1973/20 at the High Court in Bulawayo challenging the suspension, and cited Khupe, Morgen Komichi, the party’s national chairperson and MDC-T as respondents.

Bhebhe announced his intention to run for the presidency at the party’s belated extraordinary congress set to be held before 30 November.

An MDC-T standing committee meeting recommended Bhebhe’s suspension after he accused interim president Khupe and national chairperson Komichi of wiping out party funds totalling ZW$7 million. But a defiant Bhebhe insisted that he will run for the presidency.

In his founding affidavit, Bhebhe argued that his suspension was done out of vindictiveness and spite and was a furtherance of issues that he had already complained about.

“An objective view of the matter also shows that there is evident bias in suspending me without any specific reasons to justify the suspension. There was bias in the manner in which the first respondent (Khupe) carried out my suspension without any reasons due to the complaint that I had previously written and her animosity towards me,” he said.

“This is an application to review the exercise of the first respondent’s powers in terms of section 9.1.2.3 of the MDC-T constitution which allows her to suspend me from my position as national organising secretary on reasonable grounds for breach of the party’s constitution, rules and regulations. I aver and submit that my suspension from that position by first respondent via a letter dated 29 October 2020 is reviewable for various reasons.”

Bhebhe said the suspension letter is ultra vires sections 9.1.2.3 as read with section 7.14 of the party’s Disciplinary Code of Conduct and Regulations of the constitution of the party. He said Khupe failed to proffer clear grounds of the suspension and failed to define and identify the breach or offence committed.

He wants the court to declare his suspension declared null and void and set aside. Bhebhe said Khupe’s conduct exhibited bias against him and as a result she should be ordered that any direct powers that she may exercise must be instead exercised by the party’s national council at a meeting duly constituted and convened by Komichi in terms of the party’s constitution.

Bhebhe also wants Khupe and the MDC-T to pay costs at a higher scale.

In court papers supporting Kagodora and Mamuse, the former Nkayi South MP claimed Khupe had blown ZW$7 million given to the party under the Political Parties (Finance) Act.

He also claimed Khupe and Mwonzora were making decisions about the congress without the approval of the national council as per the party’s constitution.

The extraordinary congress was ordered by the Supreme Court, which ruled that MDC-Alliance president Nelson Chamisa’s succession of the late MDC founding leader Morgan Tsvangirai was illegal.

The respondents are yet to respond to Bhebhe’s application.

The tough life of an immigrant in Zimbabwe