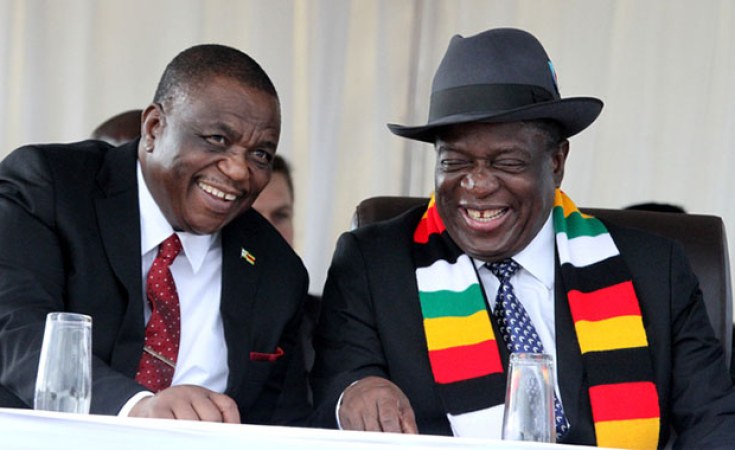 AFTER his initial daring purges of military commanders who propelled him to power through a military coup in November 2017, President Emmerson Mnangagwa is now capitalising on political contingency and opportunities triggered by the death of four ministers due to Covid-19 to consolidate power and ensure he survives the Zanu PF elective congress next year, insiders say.

OWEN GAGARE
The sources said Mnangagwa is moving to tighten his dead man’s grip on power by phasing out the military in cabinet, while bringing in close political allies.

Mnangagwa is also seeking to seal his position as the party’s presidential candidate in the 2023 elections, although he had initially agreed to a deal with his co-deputy Constantino Chiwenga to serve one term after being thrust into power by the army.

Chiwenga, who was the Zimbabwe Defence Forces commander during the coup, was tipped to take over from 2023.

However, to Chiwenga’s shock and chagrin Mnangagwa and his supporters started pushing for the president to remain in charge beyond 2023 as early as December 2018 during the ruling party’s Esigodini annual conference.

Shiri and Moyo were critical political cogs in the Chiwenga faction.

After Shiri’s death in July last year, Chiwenga and his army-driven faction pushed for his replacement with a person with a military background, but Mnangagwa appointed his ally from Masvingo Anxious Jongwe Masuka.

One of Mnangagwa’s key strategies has been to mainly appoint his ethnic Karanga homeboys, mostly from Midlands and Masvingo provinces, into key positions as part of a power consolidation strategy.

This is widely seen as continuation of Mugabe’s ethnic and regional politics – politicisation and weaponisation of ethnicity for political ends.

Mugabe mainly appointed his ethnic Zezuru homeboys into key positions throughout his 37 years in power. This was the main reason for the Tsholotsho Declaration of 2004 which sought to rotate leadership among the Zezuru, Karanga, Manyika and Ndebele socio-ethnic groupings. It also influenced the coup.

Chiwenga, Shiri and Moyo were critical in the planning and execution of the 2017 coup.

Besides being the face of the coup, Moyo was one of the key architects of the operation against Mugabe and worked hand-in-glove with Chiwenga when he was in charge of the military’s business units, which became central in building a war chest to execute the mission.

Before working with Chiwenga, Moyo worked with former Central Intelligence Organisation (CIO) director-general Happyton Bonyongwe, a retired Major-General, when he was still in the army.

After assuming power, Mnangagwa unleashed a wave of purges in the military, police and CIO targeting Mugabe and former first lady Grace Mugabe’s allies, before going for Chiwenga’s loyalists.

Key commanders – who pivoted the coup including the commander of the Presidential Guards Battalion retired Lieutenant-General Anselem Sanyatwe –  were removed in February 2019 while Chiwenga was battling ill-health in China.

In May 2019, Mnangagwa then appointed Sanyatwe Zimbabwe’s Ambassador to Tanzania, while Nyikayaramba was posted to Maputo, Mozambique. Chedondo was sent to China.

Sanyatwe had a personal relationship with Chiwenga to the extent that he flew from Tanzania to assist him finalise his divorce proceedings with his wife Marry Chiwenga nee Mubaiwa.

Sanyatwe presented the Mubaiwa family with Chiwenga’s divorce token (gupuro), a traditional way of confirming that a marriage is irretrievably broken.

Another big blow for the Chiwenga camp was the removal of retired Lieutenant-General Engelbert Rugeje from heading the Zanu PF’s critical mass mobilisation political commissariat. Rugeje operated in the war room during the coup.

Soon after the coup, Chiwenga arm-twisted Mnangagwa to appoint Rugeje as political commissar ahead of his preferred candidate Victor Matemadanda, albeit temporarily.

Mnangagwa later removed Rugeje from the position before appointing Matemadanda in June 2019.
Mnangagwa’s cumulative manoeuvres have shifted the balance of power in Zanu PF Mnangagwa’s favour – at least for now, although Chiwenga had an upper-hand after the coup.

The vice-president’s ill-health has been a major drawback for the military faction. On many occasions Mnangagwa has purged Chiwenga’s allies while he is out of the country, seeking treatment.

Chiwenga and his allies have been trying to regroup and recover lost ground with their eyes fixed on next year’s congress and the 2023 elections.

As exclusively reported by The NewsHawks recently, Chiwenga, Moyo and Rugeje met in Victoria Falls in December where they discussed, among other things, a fightback strategy.

This was the nucleus of the 2017 coup, together with some who have been retired by Mnangagwa in a bid to neutralise the military faction.

“Chiwenga was in Victoria Falls during the festive period, with a group of 15 family members and friends. Moyo was also there with his family, including his wife. Rugeje was also there. There were many VIPs in town. Hotels were full, restaurants and the rainforest buzzing with a hive of activity. These VIPs couldn’t travel out of the country due to Covid-19, so they swarmed local tourist destinations,” a security source told The NewsHawks a fortnight ago.

“Moyo was staying in the presidential suite at Victoria Falls Hotel, but when Chiwenga arrived he vacated it for him and moved to Elephant Hills Resort. Rugeje was also staying at Elephant Hills. The three had a number of meetings, in which they discussed family issues, holiday events and serious political matters. Their meetings will have a bearing on how political events will unfold going forward but Moyo’s death will affect so many things.”

Rugeje has been doing grassroots work for the military faction after they lost Shiri who was also doing a lot of work. Shiri also took advantage of his role as Agriculture minister championing the Pfumvudza project, which in essence is a Zanu PF grassroots mobilisation tool, to mobilise for Chiwenga.

Shiri and Moyo’s death have left Chiwenga’s faction weakened, while its leader – the Vice-President – is now isolated in cabinet after losing his most powerful lieutenants, Shiri and Moyo.

When Chiwenga was acting President between 15 January and 1 February, Chiwenga spent most of his time marooned at his Chinese Golden Peacock Villa Hotel located along Kingsmead Road in Borrowdale where he has been staying after his divorce.