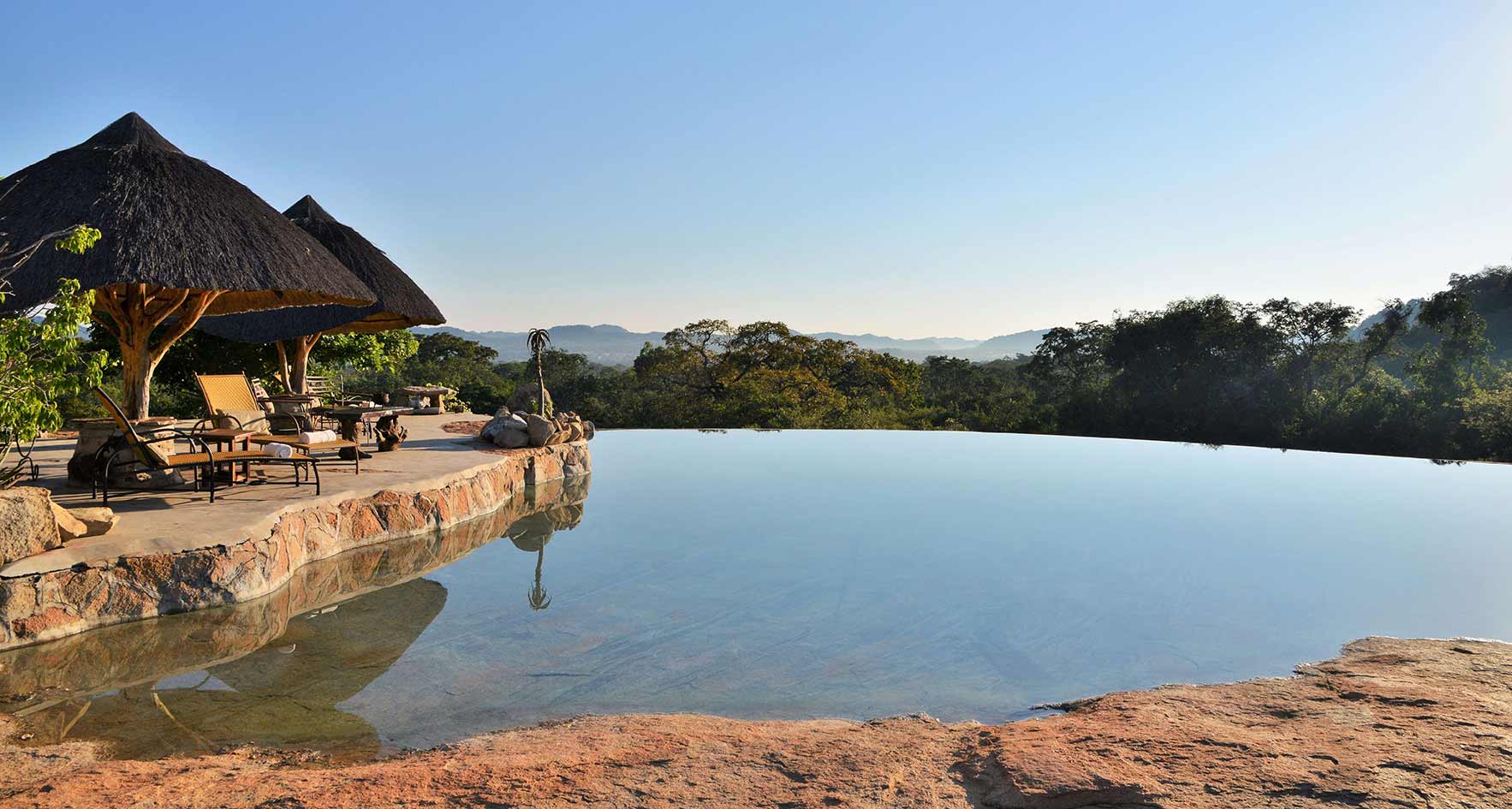 That is where prominent British colonial empire-builder Cecil John Rhodes is buried on the famous “View of the World”.

Not far away, there is the grave site of legendary Ndebele King Mzilikazi Khumalo, whom Rhodes admired for his military exploits and heroics, and demanded to be buried in his vicinity.

Amalinda is a uniquely designed and environmentally friendly eco-lodge which has been tastefully decorated with a natural African bush feel about it.

There are 10 different rooms all offering something special as well as The Homestead which is located away from the main lodge, but  accessible.

All lodge rooms are African themed and well appointed with comfortable beds and plenty of space. Each affords the visitor lots of privacy and the only sounds you hear are those of the plentiful array of birds.

A short walk from the main lodge is the swimming pool and outside bar and entertainment area. The infinity swimming pool is built on natural granite and offers sweeping views over the surrounding  countryside.

Amalinda is situated in the Unesco World Heritage Site of the the Matobo Hills which is the oldest National Park in Zimbabwe having been established in 1926 at the bequest of Rhodes.

The ‘Matopos’, as it is widely known, is also a spiritual place and offers the visitor a wide variety of activities.

That’s where the traditional rain-making shrine Nzelele is located. The amazing rock formations alone warrant a visit and the Matobo Hills area boasts many impressive examples of San Bushmen paintings which are well worth seeing.

Alternatively visitors can just relax around the amazing infinity pool which it built on natural granite rock and offers great views of the area.

While the camp is ideal for anyone who simply wants to relax, there are many activities on offer which may include swimming, guided bush walks, visits to a local village, game viewing in the national park, birding, or a visit to the magnificent “View of the World” where you can visit Rhodes grave and the Shangani Memorial, which depicts the historic battle between the Ndebele warriors and the Major Allan Wilson Patrol.

The Shangani Patrol (or Wilson’s Patrol) was a 34-soldier unit of the British South Africa Company that in 1893 was ambushed and annihilated by more than 3 000 Ndebele warriors in Rhodesia (now Zimbabwe), during the First Umvukela/Chimurenga War.

Headed by Wilson, the patrol was attacked just north of the Shangani River in Matabeleland. Its dramatic last stand, sometimes called “Wilson’s Last Stand”, achieved a prominent place in the British public imagination and, subsequently, in Rhodesian history, similarly to events such as the Battle of The Little Bighorn in the United States, the Battle of Shiroyama in Japan, the Battle of the Alamo in Texas, and the Greeks’ last stand at Thermopylae.

The Matopos area has a wide variety of birds with over 320 species having been recorded, including the famed Black Eagle. Within the park one may well see a good variety of animals including the white Rhino.

The food at Amalinda Lodge is great and is not only delicious, but beautifully presented. Definitely top quality.

It’s uniqueness makes the Matopos and Amalinda Lodge one of the most sought after destinations within Zimbabwe.

Visitors go for the setting, the rich history and the opportunity to track rhino on foot. Besides historical and cultural activities, relatively easy rhino tracking, and some gentle safari activities that pleasantly contrast with and complement the more safari-focused camps in the larger national parks.

Two thousand years ago, the Bushmen called Matopos their home. Now visitors can also temporarily do. It’s a great lodge in a stunning environment, and it is well worth a visit, especially during the coming Easter holidays. – STAFF WRITER