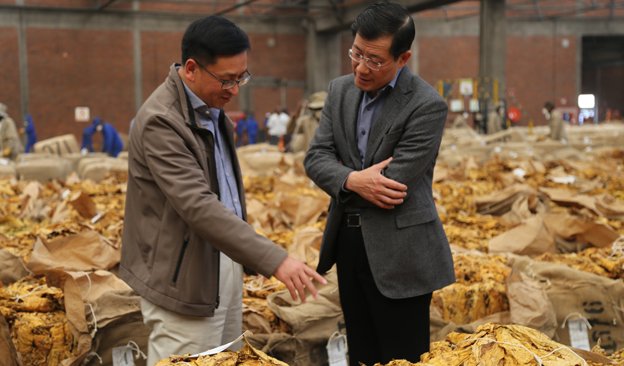 IN a bid to understand how Zimbabwean-based Chinese tobacco giant Tian Ze, a subsidiary of China Tobacco International Inc, controlled by the state-owned China National Tobacco Corporation (CNTC), is fast becoming a monopsony — dominant buyer in the market — The NewsHawks recently sought an interview with the company. CNTC is the biggest cigarette company in the world.

Tian Ze spokesperson Li Wenjie (LW) spoke to The NewsHawks reporter Chippa Gonditii (CG) about various issues relating to the company, market dynamics and its emerging dominant position in the local tobacco industry which generates close to US$1 billion annually. Find below the interview excerpts:

CG: May you start by telling us the history of Tian Ze.

LW: Tian Ze is a subsidiary of China Tobacco (CNTC). We came to Zimbabwe in 2005. Our initial aim was to outsource tobacco growing for cigarette-making in China because Zimbabwe has one of the best tobacco in the world.

At that time production of tobacco in Zimbabwe was very low, so the Zimbabwean government came to China Tobacco and asked for help, that is when we set up the company and started contract farming. At that point farmers in Zimbabwe had land, but did not have any money, so we started the contract growing system where we would give them inputs and encourage them to grow tobacco that they would deliver to us.

We are also buying half of all the tobacco produced in Zimbabwe (from growers, auction floors and other tobacco companies).

As Tian Ze we do contract growing, we have got our own department, but that is not enough. So we also buy tobacco from other merchants and other tobacco companies like Northern Tobacco and Zimbabwe Leaf Tobacco.

Every year we buy almost 62 million kg of packed and processed tobacco. So if you convert it back to green tobacco, you will actually see that its 100 million kg, which is almost half of the tobacco produced in Zimbabwe. This 62 million kg we are buy is best quality tobacco and the value of that is around US$500 million, that is money that China tobacco is bringing to Zimbabwe in purchases.

CG: What would say are some of your achievements as a company so far?

LW: As Tian Ze, we are here to buy tobacco and send it to China, and in the process we support the farmers. And if you check around you will see that we are the only company that does not charge interest on inputs and loans, we lend to our farmers at zero interest.

And all the inputs we give to farmers are given at the suppliers’ price. We do not put any mark-ups; some other companies charge higher prices than those offered by suppliers. That is why we have a big and stable contract farming scheme.

As I said earlier on, China Tobacco is buying half of the tobacco in Zimbabwe which is a big contribution to the economy I would say.

CG: How many people do you currently employ at your company?

LW: We have six Chinese expatriates sent from China; these are like civil servants sent by China Tobacco. But overall, we have 10 Chinese guys, 73 permanent employees and 350 seasonal workers from around March to August.

CG: What is your business model as Tian Ze?

LW: At Tian Ze we do contract farming and currently we have about 150 contract farmers who grow about 80 000 hectares.

CG: When did you start engaging small-scale farmers and what has been your experience so far?

LW: We started engaging small-scale farmers two to three years ago; we are still doing a trial run so that we can see how the process goes because the problem with small-scale farmers is that they are not stable, the quality of tobacco that they produce is not up to the same level as that by commercial farmers. But the good thing is that inputs levels for small-scale farmers are low; you do not have to give them much inputs, but we are really trying to engage them.

CG: How many commercial farmers did you start with and how many do you have now?

CG: How much tobacco do you buy from auction floors

LW: Slightly over a million kg.

CG: How much tobacco do you get from commercial farmers and tobacco merchants?

LW: Out of the 62 million kg I mentioned earlier, we get 12 million kg from in-house (from growers) and the other 50 million kgs we are getting from merchants. So far we have nine suppliers selling to China Tobacco, including ourselves Tian Ze).

CG: What been your average buying piece?

LW: You might have to check the TIMB (Tobacco Industry Marketing Board) data, but we do have the highest average price among all the tobacco companies in Zimbabwe.

CG: Farmers we have spoken to complain about the Reserve Bank of Zimbabwe’s 60:40 forex retention ratio. What is your comment on this?

LW: I think there are two sides to this story; for farmers this year they are getting 60% forex and 40% Zimdollar when they sell their tobacco. However, from the company side, whenever we bring forex from outside we have to claim from RBZ; if the money is for farming inputs then you get to keep 100% forex, but if it’s for other uses then its 60:40.

CG: How has this affected your company?

LW: As a company we do not have a problem with the 60% which goes into the nostro account, the problem is the 40% because the official rate is around US$1: ZW$85, but outside they use a black market rate which is much higher. So this actually increases our cost of operation and adds extra costs to the company.

We have been trying to talk to the Ministry of Finance and the RBZ to adjust this policy because as a tobacco company we are bringing a lot of forex.

CG: What are the main terms and conditions on contracts between a farmer and Tian Ze?

LW: If a farmer wants to join us, there is a procedure that they have to go through like an assessment. There are things which we will need to check out like title deeds and offer letters so that we see if the farmer is actually entitled to farm on that land.

We also send in our guys so that they check out the various equipment and facilities in the area. So if a farmer joins us, in the first year we do not give them any inputs because we want to see how good they are in growing tobacco, but as the years go by we increase the inputs.

Every year we do an assessment before signing of the contract, this will be in the form of a scoresheet. So basically farmers are graded according to how they score on this assessment. Farmers who get higher than 90% are given more inputs because we then know they will able to pay back the loan; in tobacco farming if you give money away you don’t get it back.

CG: What type of inputs are generally given out to farmers?

LW: The inputs that the farmers get are unique to each farmer, for example some farmers might require more fuel and another might say he or she needs more fertiliser, while some prefer other things. However, there is a limit to what they can get.

CG: How much are you spending annually on commercial farmers?

LW: Roughly I can say we are giving out US$55 million to farmers for both commercial and small-scale farmers.

CG: How much are you spending on buying tobacco annually?

CG: From all the tobacco that you buy, how much do you export to China?

LW: From what we get, there is some which sell to China then there is the other tobacco of poor quality which we swap with other companies.

There is some quality that is need in China, so we swap with other companies and get what we want. Alternatively, we just sell to them that grade of tobacco we don’t want and buy the grade which is wanted in China to top upon what we already have.

We used to just send everything to China, but now they need top quality tobacco and that is the only grade they accept.