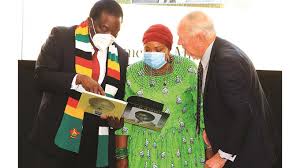 PRESIDENT Emmerson Mnangagwa’s biography by his newfound ally, Eddie Cross, has yet another major distortion which borders on lies on what happened after the former vice-president had been fired by his predecessor, the late president Robert Mugabe.

The biography claims that after escaping from Zimbabwe, Mnangagwa flew to China to meet Vice-President Constantino Chiwenga, who was then the Zimbabwe Defence Forces commander, to discuss how they should fight back from the far-flung Asian nation.

“When Emmerson drove home at lunchtime on the 6th of November, he was aware that if he stayed in the country his life would be in danger. He called his family in, and they quickly made plan to get Emmerson out of the country over the border in the Eastern Highlands. Emmerson’s brother would drive to the Border Post in Mutare in his official car, while Emmerson would be driven in a small, inconspicuous sedan to Number 3 Brigade outside the City of Mutare. From there he would be taken over the border into Mozambique,” reads part of the biography by Cross entitled A Life Of Sacrifice.

Further reads the biography: “After a short time in Mozambique, he was flown to China where he met with the Commander of the Armed forces in Zimbabwe who was in China for talks on military cooperation and then after a short time they flew back to South Africa where Emmerson remained until the 22 of November.”

“The Commander of the Armed Forces General Constantine Chiwenga flew home from South Africa and was escorted to his home by crack Zimbabwean troops from which he issued a lengthy statement saying that the Armed Forces were deeply concerned about the potential for instability. Accordingly, threatened that they might ensure that law and order was maintained and that they stability of the state was protected.”

However, various other accounts written around the time of escape show that Mnangagwa left Harare headed for Mozambique through Mary Mount, outside Mutare, where he was then taken to Beira, before taking a plane to Lanseria Airport, North of Johannesburg.

Mnangagwa was taken to Maphosa’s house in Pretoria, where he stayed for two weeks until his return. Maphosa has given detailed interviews on several occasions, saying he stayed with Mnangagwa in his house.

A book titled In the Jaws of The Crocodile by journalist Ray Ndlovu, based on various accounts with members of Mnangagwa’s family, differs from the narrative in the latest book.

Ndlovu’s book details Mnangagwa’s “great escape” through Beira where he would eventually escape into South Africa and not China.

After a brush with security officials at Forbes Border on 7 November 2017, Ndlovu writes that a visibly shaken Mnangagwa went to a hideout in the bush before seeking safe passage out of the country. Crossing into Mozambique with three military personnel, Mnangagwa purportedly walked 30 kilometres.

“At about 11.55pm, the group crossed the border and dashed into the no man’s land that separates Zimbabwe and Mozambique. There they began the long journey of about thirty kilometers into Mozambique, walking in mud as it had rained. Danger continued to lurk, and often they had to take cover from soldiers patrolling the territory,” reads part of the book, which paints Mnangagwa in heroic light.

This account is different to the false narrative in Mnangagwa’s latest biography.

On the day Mnangagwa was fired from the government, Maphosa had received a call from Emmerson Jnr, according to Ndlovu’s book.

Emmerson Jnr had called on behalf of his father, who begged Maphosa for help as he feared that state security would swoop in on him.

“I’m sure you are watching the news. I have been fired and I have been stripped of my bodyguards and I am now on the run. I’m going to try and find a way to run away from this, but it’s very hot and I need your help,” Mnangagwa pleaded.

Mnangagwa’s earlier attempts to leave the country had failed while close associates like Zunaid Moti also refused to help.

“Immediately after the conversation, Maphosa put together a rescue plan with his team of white security officers at his office, who he boasts are highly skilled and professional. The plan was to collect Mnangagwa using Maphosa’s private plane from Beira in Mozambique and to land at Lanseria Airport near Johannesburg. A second plane was on standby in the event that an emergency situation developed and the rescue plane ran into trouble in Mozambique,” reads the book.

“Mozambique was aware that Mnangagwa was in the country. Anyone who claims they did it in their power, they are lying. You would not have done this thing if God was not involved. It is very simple Zimbabwe could have just called and said: We have a fugitive, find him, catch him and bring him to us,” Maphosa was quoted as saying.

According to Ndlovu, Mnangagwa arrived at the airport in Beira in disguise, making it difficult for the authorities to recognise him.

“At 6am, Maphosa dispatched his plane from South Africa to Beira where he would pick up Mnangagwa and his sons. It was the beginning of yet another nerve-raking episode. There were delays to the paperwork for the plane, and this fueled the fear that Mozambique was using delaying tactics,” Maphosa said.

Further reads the book: “The clearance took a long time to come. I was worried why, and I was thinking during that time of waiting that perhaps they were busy conveying information to the Zimbabwe government. The issue I was now faced with was, do I dispatch a second plane, and do I physically go there myself? It was a very tense moment and I kept on talking to the pilots to find out what was happening. The excuses for delay were petty reasons such as the manager on duty was not around.”

After a 12-hour wait, the plane carrying Mnangagwa and his sons left Beira at 6.15pm, headed for South Africa. And about 7.15pm, the plane arrived at Lanseria Airport near Johannesburg.

To avoid unwarranted attention, Maphosa had 30 identical black Range Rover SUVs which were on the tarmac ready to leave with Mnangagwa.

Mnangagwa was then put in a heavily guarded safe house where he narrated his ordeal to Maphosa.

“While in South Africa, Mnangagwa went to meetings with persons whose names Maphosa refuses to disclose. Most of these meetings were held in private settings and away from the public eye. Security was a top priority whenever Mnangagwa travelled, with heavily armed security accompanying him,” Maphosa added.

Although the book has been criticised as an hagiography, it has been confirmed by multiple sources, including Mnangagwa’s family members.

Cross’ account of Mnangagwa’s escape from Zimbabwe is riddled with “half-truths”, as it is apparent that the Zimbabwean president did not travel to China to meet Chiwenga.

Critics say Cross’s version of events is a desperate attempt to locate Mnangagwa as one of the chief architects of the coup that toppled Mugabe.

The biography, which reportedly sold thousands of copies on its launch, exposed Mnangagwa’s lies over claims that he was sentenced to death as a 16-year-old boy.

One of the urban legends sustained for a long time was that Mnangagwa was in 1965 sentenced to death for bombing a train in Fort Victoria, now Masvingo. That story has been passed down from generation to generation for the past 56 years.

Mnangagwa has insisted that he was saved from the gallows by his age over his train-bombing heroics.

“So I was saved by age because I was underage at the time I committed the crime they were charging me of.”

The purported death sentence was commuted to 10 years in jail. After serving seven years, Mnangagwa was released from Khami Prison near Bulawayo in 1972 and deported to Mumbwa, outside Lusaka, where his parents lived after they had also been apparently deported by the Rhodesian authorities.

Some critical minds have always questioned the authenticity of Mnangagwa’s story, especially in view of the brazen falsehood that he was a member of the Crocodile Gang, a group of early Zanu militants.

A war veteran, writing under the non de guerre Jonathan Chando, recently challenged the myths, including the death sentence and Crocodile Gang narrative. After 56 years of uncertainty, it has now emerged — ironically through his own biography by Cross, A Life Of Sacrifice — that Mnangagwa was never sentenced to death.

“I do not therefore propose to sentence you to death,” Justice John Lewis said.
Lewis was to later become Judge President in 1980. Hector Mcdonald was the Chief Justice.

With Harry Davies, the trio sat in the Appellate Division, as research by lawyer Tererai Mafukidze published by The NewsHawks recently shows. There were 11 white male judges in 1980.

Related Topics:Biographyemmerson mnangagwa
Up Next