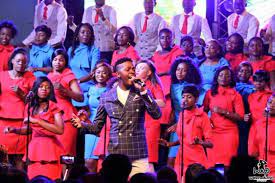 EASTER Monday might have been a quiet day to unwind and perhaps reflect on the holiday that had been.

But that was not the case for gospel music lovers who thronged the Harare International Conference Centre where ZimPraise The Legacy launched their latest project, dubbed The Jesus Revolution Season 13.

Like their previous launches, the latest project featured a coterie of yuppies, businesswomen, celebrities and also socialites.

Energy was high on and off the stage where the audiences were kept on their feet song after song, something which ZimPraise is known for.

But on stage, you could not have missed the fresh voices, new faces and sound which have become a part of the ZimPraise Academy.

The Jesus Revolution Season 13 project features amazing voices who graduated from the ZimPraise Academy. This is one thing that has sustained the group as each project almost always has something new.

And the music speaks to the young and old. According to ZimPraise Legacy chief executive Joseph Madziyire, the Jesus Revolution project is the first one since the country went into Covid-19 lockdown.

And the project is the first live recording to feature a live audience, which Madziyire described as new. “The latest project is not anything you have heard before. It is relevant because it speaks to the situation now.

“For the last two months we have been working on a project which we have named as the Jesus Revolution.  “This is season 13, which means it is the 13th project which we have worked on as ZimPraise outside of the hymns projects. So ZimPraise has done many other projects which are hymns night 1, hymns night 2, 3 and fourth hymns which we did during Covid-19 which you may have seen which were done in Mutorashanga.

“We have also done a Women of Praise project and we have done ZimPraise Kids project but I must say the seasons are particularly the main projects which we release every year. Hymns are released every two years but this season’s project, we have pretty much been releasing it every year until Covid-19 hit. “So for the last two years we haven’t released any project, any season’s project, and this is gonna be releasing the 13th season while ZimPraise is 15 years.

“In actual fact, we should be re[1]leasing our 15th season while we are celebrating our 15 years but because of Covid-19. We have not been able to release two other seasons, so what’s going to happen is we are gonna be releasing this season 13 which is a project which we have been working on for the last,  I must say, four to five months,” Madziyire said.

Madziyire also thanked their corporate partners NetOne and South African Airways for continued support of the project, saying they believe in their vision.

“And like you will appreciate most of the things are not things which they’ll say, here is money. We’ll tell them we want the HICC, or a PA system. We give them specifications. “Sometimes we don’t even get to know the figures, because our service providers and partners pay directly.

“So, for us, it’s pretty much making sure that our ticket sales are good. That’s what sustains the academy. But, in terms of monetary value, which is what most people may want to know, maybe we can sit down at the end of the year, we can say, we’ve done this project, community outreach and we’ve done the church drive. And then we can put together and say, oh, this is how much NetOne has invested in ZimPraise over a period of six months,” he said.