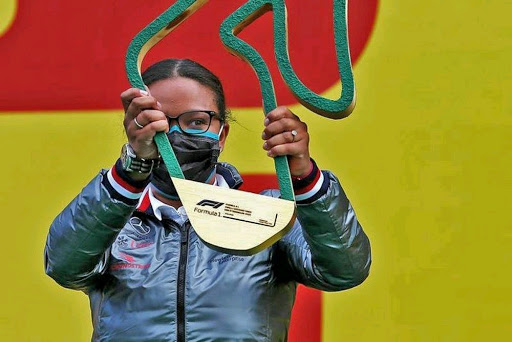 STEPHANIE Travers, a Zimbabwean trackside fluid engineer working with the Mercedes-AMG Petronas Formula One (F1) team, is basking in success.

Her team is locked in a rivalry for dominance with Red Bull Racing powered by Honda. Travers’ role, be it on the streets of Monaco or in the Red Bull Ring motorsport race track in Austria, is seen as crucial in providing power to the Mercedes car driven by world champion Lewis Hamilton.

Hamilton, who is the Mercedes main man and Red Bull’s Max Vestarppen, who is leading by 18 points, are in a dramatic and intense race to the top that has made the season entertaining, with wheel-to-wheel action such as that witnessed at the dramatic Azerbaijan Grand Prix on 6 June.

Travers will have a huge say on whether Hamilton retains the world championship or whether Mercedes will win the coveted constructors’ championship ahead of Red Bull.

The Zimbabwean, who grew up in Harare’s Arcadia suburb, is part of the Mercedes team that week in, week out and from one grand prix to another, moves across the world, regardless of the weather conditions, to ensure the Mercedes car performs well on the track.

She describes her job as bringing performance to the team. After being the first black woman to stand on the F1 podium last year, Travers has been thrust into the limelight, and is featured in the team’s online streaming series.

As a trackside fluid engineer, Travers provides the technical support and analysis for the Mercedes F1 team.
In the online feature, Travers said the best part of her job was being trackside and working with an amazing group of people.

“We win together and we lose together, it’s one big happy family and it’s really important when we spend that much time away from home. As well as that, it’s just seeing these high-speed machines out on track and knowing that I have been involved within that,” she said

“I bring performance to the team by monitoring and anaylsing the fluids, to ensure they are operating at an optimum level.  As well as that it is very important that we alert the team of any potential issues that may have come about when we are doing analysis so that we can act on them as soon as possible.”

Travers said her work in a typical race weekend involved monitoring and analysing the fluids that are sent trackside to power the Formula One car.

“Working trackside through a Formula One weekend can be intense at times. It’s important that I am able to adapt to changes very quickly and effectively, whilst maintaining an inner cool and keeping calm.

“When we get into the race weekend, I take a sample of the gearbox oil and engine oil to ensure that we have a baseline sample before the session and a post-session sample. This is important to monitor the amount of wear that we would have had in a particular session and to ensure that we are continuously monitoring the health of the Formula One car.”

Travers’ family moved from Zimbabwe to the United Kingdom in 2004. However, she still makes frequent visits to the country.

In  2016, she graduated with a Bachelor’s degree in chemical engineering with first-class honours from the University of Bradford and subsequently read for her Master’s at Imperial College, London, which she attained in 2017.

She was among more than 7 000 applicants who vied for the job of Formula 1 trackside fluid engineer with Petronas.

The yearlong process was in preparation for the 2019 Formula 1 season.