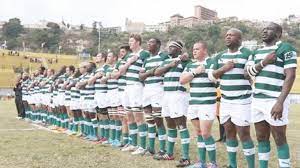 …As Sables captaincy is clarified

IN ANOTHER giant leap towards 2023 rugby World Cup qualification, Zimbabwe has clinched a new title sponsor in South African financial services group Nedbank, in a 10-month deal worth US$120 000.

Up to March 2022, Nedbank will fund the Sables’ preparations for important World Cup qualifiers, with the option to extend the partnership beyond the initial agreement.

A large Zimbabwe training squad of nearly 50 players is currently camping in Harare ahead of the first stage of qualifiers in Tunisia in July. The partnership with Nedbank, therefore, is a thoroughly welcome financial relief for the Zimbabwe Rugby Union, which has targeted to take the country to its first World Cup since 1991.

“They (Nedbank) have been interested in our brand, we’d been talking to them for a few months now,” Jason Maritz, the Sables team manager, told The NewsHawks on Thursday evening.

“We are proud to be associated with them. They have a presence in about 44 countries in Africa, so they are a very big, big brand.”

Maritz said the squad was in tip-top shape ahead of three preparatory matches before the Tunisia trip.
“The intensity is there, the hunger is there, guys can’t wait to get back into action after a long period, for some it’s been two years,” said Maritz.

“The guys are all buying into the vision of coach Dawsie (head coach Brendan Dawson). The quality in the side is awesome, we have about four good players in one position. There is healthy competition for places.”

Meanwhile, it has been clarified by Maritz that 29-year-old scrumhalf Hilton Mudariki has in fact been confirmed as the substantive Sables captain amidst confusion over the role of the fit-again Brandon Mandivenga (we publish a lifestyle story in this edition which states Mandivenga as the skipper).

An inexperienced Mandivenga had been appointed Zimbabwe’s new captain early 2019, with just four Tests under his belt, but the gifted utility-back was not able to play or lead the side the entire year due to long-term injury.

Mudariki, who was named vice-captain in the new set-up, went on to skipper the Sables to silverware in a four-nation continental competition that year in the absence of the young Mandivenga.

Mandivenga has, meanwhile, joined the Sables camp after landing in Harare on Thursday from Europe, where he plies his trade in Italy’s Serie A competition. He will, however, hand the reins to the seasoned halfback Mudariki.

“The decision was made by the coach because Hilton has been around the team’s leadership for a while now,” commented Maritz.

“This doesn’t mean Mandi isn’t part of the leadership group. If something happens to Hilton, Mandi will be there to take over.”

Playing as President’s XV, the Zimbabweans will take on Zambia twice at Harare Sports Club on 2 and 5 June in warm-up matches before hosting Namibia on 12 June at the same venue.

They will then travel to Windhoek to face the Namibians again on 19 June. On 3 July, Dawson’s men will face the challenge of Blue Bulls Select at Loftus Versfeld in Pretoria, to further fine-tune for the Tunisia tour.

Brandon Mandivenga: ‘You should set the example’ as team captain