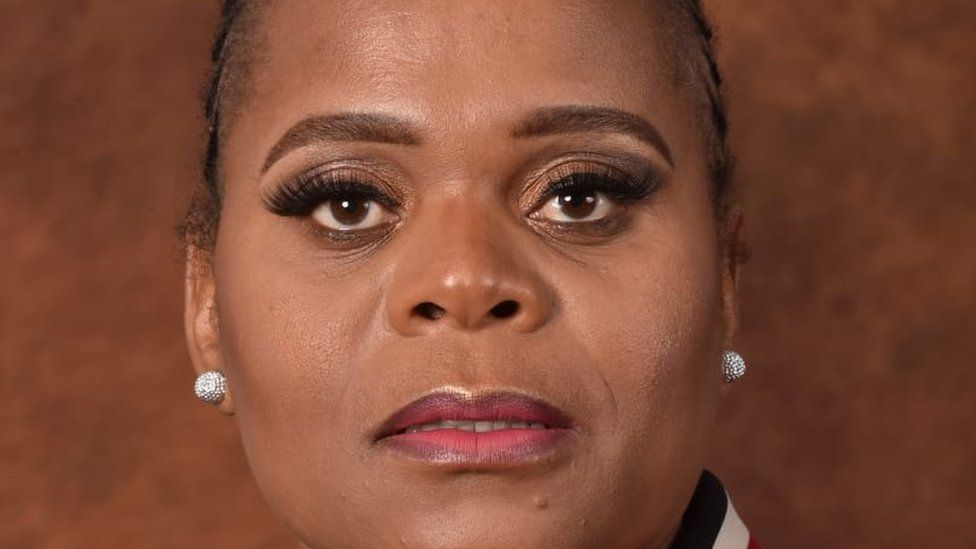 SIMMERING tensions between Zimbabwe and South Africa this week exploded after an outburst by a top provincial health official in the neighbouring country who took swipe at President Emmerson Mnangagwa over his leadership and governance failures.

Dr Phophi Ramathuba (pictured), the head of health in Limpopo province, who was on a tour of Bela Bela Hospital in the region, came across a Zimbabwean woman admitted to the health centre.

The Zimbabwean had been involved in an accident in Harare and crossed the border for a medical operation.

Upon learning that she was a Shona-speaking patient, Ramathuba immediately seethed with anger and accused her of being one of the Zimbabweans who are burdening South Africa’s public hospitals due to Mnangagwa’s governance failures.

“You speak Shona, so how do you find yourself in Bela Bela Mpumalanga when you are supposed to be with Mnangagwa? You know he does not give me money to operate you guys. I am operating you with my limited budget. You are killing my health system. When you guys are sick, I am hearing that you just say, ‘let’s cross the Limpopo River, there’s a MEC there who’s running a charity department. It’s not. I am going to tell you something that is truthful and painful.”

“In Limpopo, we have 5.7 million people, 91% do not have medical aid, they are dependent on the state. Instead of using the budget for what it’s meant for, I’m operating for what Mnangagwa is supposed to do. That is why when my people of Limpopo want health services, they can’t get. That is angering the community. You are not even registered anywhere. It’s unfair,” she said.

During the Robert Mugabe era, South African leaders would not dare challenge him directly or, worse still, denigrate him publicly in name. They regarded him a statesman.
However, the Ramathuba diatribe shows the extent to which the neighbouring country has lost respect for Mnangagwa and his Zanu PF.

The video of her outburst went viral on social media, attracting anger from some Zimbabweans who felt she had been insensitive to the plight of the patient.
Interestingly, the Harare regime has been silent over the matter.

In follow-up interviews with South African media houses, Ramathuba however defended herself.

Speaking to TimesLive, she said: “If she came here for an emergency or she was pregnant you would be justified in criticising me, but this patient got an accident in Harare. She told me a family friend told her to come to Limpopo, she would get help.”

In another interview with the South African Broadcasting Services (SABC), Ramathuba said she did not regret her remarks to the Zimbabwean woman.

“I did stand by its content because I need to share that understanding that they are not doing anything to our surgical backlog, people are abusing the system. When they hear that the MEC is coming to this district with special care, they leave their country, enter SA illegally, and come to our hospitals. The South African whom we did this budget for is unable to get operated because they’re still flooding even our initiatives. This is an initiative outside our daily work,” she said.

While expectations were high that Ramathuba would be condemned by South Africa’s government arms for what some commentators described as Afrophobia, they instead sided with her, further exposing the escalation of tension between Pretoria and Harare.

That country’s Department of International Relations and Cooperation (Dirco) spokesperson Clayson Monyela said Ramathuba’s outburst was not yet “a diplomatic incident”.

“If Zimbabwe was to raise the incident through diplomatic channels, only then would Dirco become involved. So far, it’s not a diplomatic incident. It has not been elevated,” he said.

In a statement, the South African department of health also sanitised Ramathuba’s outburst.

“The National Department of Health has been inundated with media queries to weigh in on the current debate prompted by the comments made by Limpopo MEC for Health in a video clip recorded in Bela Bela hospital,” reads the statement, adding: “Although, the department doesn’t have full context of the video conversation between the MEC and the patient, which make it difficult to make conclusion. We acknowledge that the public healthcare system is struggling in some areas to meet the healthcare needs of the citizens and reduce the backlogs due to unpredictably high number of undocumented migrants from neighbouring countries seeking healthcare service in the country, other than the asylum-seekers and refugees.”

“This issue is one of the subjects that are discussed during bilateral and multilateral meetings at SADC level in order to find a long lasting solution.”

“Limpopo Province is one of the affected provinces, and despite these challenges, the healthcare workers must ensure that they maintain high moral obligation and standards in their work in line with the Hippocratic Oath, together with the National Health Act and the Refugee Act of South Africa.”

“This does not mean that all services are free, because only primary healthcare services are provided free of charge, but higher levels of care are subject to a fee.”

South Africa’s minister of Health Dr Joe Phaahla, who was said to out of the country, and the acting minister Angie Motshekga did not comment on the video.

The now frosty relations between Zimbabwe and South Africa have a historical background preceded by strong ties during the Mugabe era.

In 2010, Wikileaks cables revealed that the United States had haboured a foreign policy to push for Mugabe’s ouster through persuasion of South Africa to implement the agenda, but the then country’s leader Thabo Mbeki helped Zanu PF to dribble past the plan through the stitching together of a Government of National Unity (GNU).

During the land reform exercise that saw Zimbabwe being isolated by the international community, South Africa stood shoulder-to-shoulder with the Harare regime in what came to be known as “quiet diplomacy”.

When Mnangagwa rose to power in 2017 through a military coup, his administration also had a stable relationship with South Africa.

Mnangagwa had actually been hosted in South Africa for weeks after fleeing Zimbabwe following his dismissal as vice-president by the late Mugabe.

During his short stay in South Africa while he arranged the coup with army generals back home to topple the late Mugabe, Mnangagwa actually met with the Sadc country’s authorities and won over their hearts as they felt he would bring in a new trajectory to Zimbabwe.

Mnangagwa then met South Africa’s leader Cyril Ramaphosa on 24 January 2018 in Davos, Switzerland and at the time their relations were warm and fraternal.

The beginning of the frosty relations between the two nations started after the 1 August 2018 atrocities when the army shot and killed six unarmed citizens and wounded 35 others.
In the aftermath, there were reports of rape of women by state security agents,  among other gross human rights abuses.

The commission’s key results areas were to investigate the events leading to the violence, the conduct of the police, the involvement of the army, and to find out if the force used was proportional.

Part of its findings highlighted that while the violence during the protests, including the destruction of property, was uncalled for, the state made mistakes in its response, violating the national constitution.

It noted that in deploying the army to assist the police, grave shortcuts were made as proper procedures were not followed.

The commission made several recommendations, including that the rogue soldiers who killed civilians and that the state security operatives who committed human rights abuses be prosecuted.

The Harare administration, four years on, has largely ignored the recommendations and this constitutes part of the reasons why there is now escalation of tension between Harare and Pretoria as the governing ANC now takes a dim view of Mnangagwa’s administration.

Another diplomatic blunder fuelling the bikateral tension is Zimbabwe’s appointment of a non-PF Zapu ambassador to South Africa — David Hamadziripi — who has no close ties with ANC leaders.

Mugabe during his time appointed ambassadors to South Africa with a PF-Zapu history so that they could gel with ANC leaders and mediate on tricky diplomatic issues on that basis.
These included the late Simon Khaya Moyo and present Director-General of the Central Intelligence Organisation (CIO) spy agency Isaac Moyo.

The tension between Zimbabwe and South Africa worsened in 2020 when a delegation dispatched to Harare by Ramaphosa to talk things over was rubbished by Zanu PF leaders who insisted that there was no crisis in Zimbabwe.

The delegation, led by Ace Magashule, left without meeting opposition political parties and civil society organisations — as they had been instructed to do by Ramaphosa.

Zanu PF’s top leadership dismissed as false reports that there was an economic and political crisis in Zimbabwe at a time when there was a background of gross human rights abuses like kidnappings and torture of opposition activists coupled with rising inflation.

Invictus to sink US$100m into oil and gas exploration