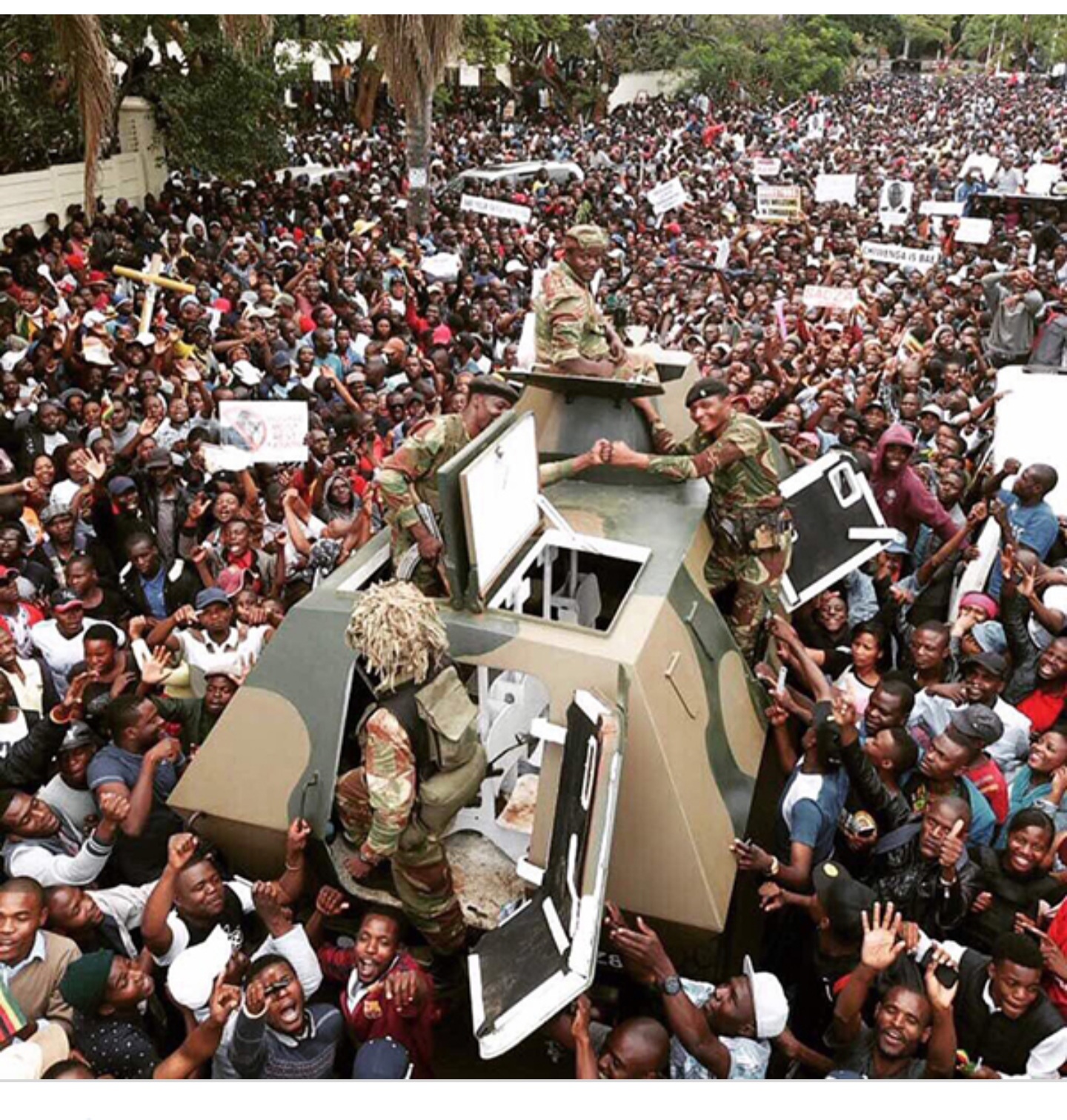 AS Zimbabweans this week quietly marked the fifth anniversary of the military coup which propelled President Emmerson Mnangagwa to power, the impact of the 2017 power grab across the continent has been dramatic — it has triggered a wave of coups.

Nigeria’s former president Olesugun Obasanjo (pictured above) crystallised this assertion during a recent address at the Pan-African Parliament in Midrand, South Africa.

A former beneficiary of military skulduggery himself, who however later helped to usher democracy into his then coup-infested country, Obasanjo attributed the recent proliferation of coups in Africa to the 2017 Zimbabwean coup that ousted the late former president Robert Mugabe, with Mnangagwa taking over.

Obasanjo said Africa is struggling to extricate itself from the “culture” of coups, which Zimbabwe helped to revive in 2017.

Since the November 2017 Zimbabwean coup, there have been at least 16 coup attempts and successfully executed coups.

In the past, Nigeria, alongside other West African countries, were the bastion of coups.
Obasanjo said toppling unpopular regimes like the Mugabe one by unconstitutional means — that is outside the legitimacy of democratic elections — is not helpful for Africa.

“I once moved a motion in 1999 then that any country that has a government not through constitutional means should be suspended,” Obasanjo said.

“There should be no half measures about these. It started in Zimbabwe where they said ‘it’s not a coup and it’s a half-coup, it’s a near-coup’; a coup is a coup! Citizens of Africa have been able to shun leaders who amend the constitution, intending to personally gain from such amendments.”

Obasanjo’s remarks provoked an angry outburst from Zimbabwe’s ruling Zanu PF spokesperson Chris Mutsvangwa who described the respected former Nigerian statesman as a “blabbermouth” — which is ironic given the Zimbabwean politician’s garrulous and bombastic reputation. Mutsvangwa went on to label Obasanjo an “original coup leader” and a front for “neo-liberal post-colonial political projects in Africa”.

Despite Mutsvangwa’s insults against Obasanjo, evidence from research shows that while coups appeared to be almost on course to extinction a few years ago, they made a forceful comeback after the Zimbabwean military takeover in 2017 which the Southern African Development Community, African Union and United Nations ignored or tacitly approved largely because of Mugabe who had not only overstayed his welcome in power after 37 years, but also polarised world opinion.

By the numbers, between 2015 and 2020 the world never saw more than two successful coup attempts in a year.

However, by January this year, there have been eight coups in the previous 12 months — with a coup in Burkina Faso at the beginning of the year.

Since January, there have been coup attempts in Guinea Bissau in February and in Mali in May.

Most recently, there was yet another coup in Burkina Faso on 30 September.

Coups are now for the most part “limited to the poorest countries in the world” and tend to happen where there are severe security threats or civil wars, as well as a past history of coups, Powell says.

While there is clearly a regional dynamic to the recent coup surge, Powell thinks the pandemic has also played a role by straining the resources of vulnerable countries and soaking up the attention of international actors.

In 2015, he notes, a coup attempt in Burkina Faso collapsed after a week due to domestic pushback and the threat of international intervention.

Between the lines, the fact that just one successful coup (in Zimbabwe) took place between 2015 and 2019 may have convinced some would-be plotters they had little chance of success. But that appears to have changed.

“The lesson being taken from the coups that occurred over the last year is that the international community is ineffectual in dealing with them, and there seems to be increasing evidence that people are more likely to tolerate them domestically,” Powell says.

Most of the recent coups have been concentrated in West Africa or elsewhere in Africa’s Sahel region, where governments have struggled to combat Islamist insurgencies over the past decade.

Mali has experienced two coups since 2020.

Chadian President Idriss Déby was killed last year in April while commanding a counter-insurgency campaign; his son Mahamat Idriss Déby Itno, an army general, was installed as his successor.

Pan-African Parliament president Fortune Charumbira, who is a leader of a traditional chiefs in Zimbabwe, acknowledged Obasanjo’s averment on the devastating impact of coups on democracy, saying Zimbabwe needs to uphold the constitution and the rule of law, which are pillars of good governance.

Interestingly, Obasanjo’s political and military career has seen him make a transition from being a coup leader and later becoming the father of Nigeria’s modern democracy.
Obasanjo was Nigerian president from 1999 to 2007, during which time he played an instrumental role in bringing democracy back to the country and was chairperson of the AU from July 2004 to January 2006.

He served as Nigeria’s military ruler from 1976 to 1979 and was Africa’s first military head of state to hand over power to a civilian government.

The United Nations inducted him as special envoy of Africa in 2008. Since then, he has been overseeing the democratic elections of countries across the African continent on behalf of the AU and Ecowas.

Interestingly, Obasanjo benefitted from military action in Nigeria in the 1970s.

General Yakubu Gowon, in power from 1966, was overthrown in a palace coup in 1975 and succeeded by General Murtala Muhammad, who was in turn assassinated in an abortive coup by Colonel Bukar Dimka and military officers from the middle belt in 1976.

Murtala was replaced by Obasanjo, formerly his deputy. So Obasanjo basically benefitted from that military fiasco.

To his credit, though, Obasanjo relinquished power to civilian rule in the 1979 elections, gaining international respect as a credible statesman and diplomat.

In 1995, Obasanjo was arrested for allegedly attempting to oust Sani Abacha via a military coup. He was only released in 1998 following Abacha’s death — and in 1999 Obasanjo was declared the winner of the elections that year, becoming the country’s first civilian leader in 15 years.

Prior to that, Nigeria had been convulsed by a series of coups.

Abacha had received his formal military training at Nigerian and British military training colleges. He rose through the ranks in the Nigerian military and by 1983 had achieved the rank of brigadier-general when he assisted Ibrahim Babangida to overthrow Shehu Shagari who had been elected to his second presidential term in 1983.

Current Nigerian President Muhammad Buhari became leader from 1983-85, but just two years later Babangida overthrew him and installed himself as ruler with Abacha as second-in-command.

Elections held in 1993 were won by tycoon Moshood Abiola, a candidate supposedly supported by Babangida, who, however, annulled the elections and set up a civilian interim government, which Abacha quickly overthrew.

Abacha ruled until his death in 1998, the same year his victim Abiola died. Obasanjo then came in again — like Buhari — through democratic elections, the first in 15 years; leaving a legacy of democracy which, by a twist of history, now defines him as one of Africa’s most respected statesmen.

There have been about 475 global coup attempts since 1950: Research