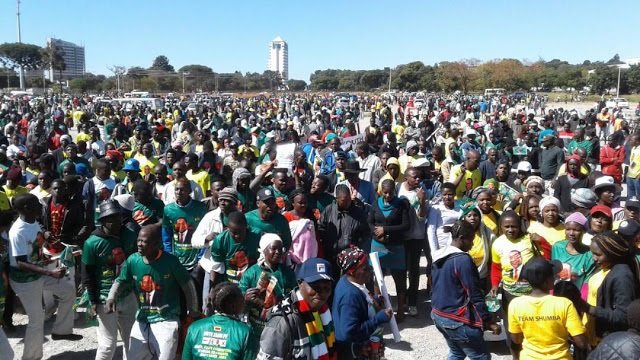 ZANU PF youths in the Midlands capital have forcibly allocated themselves vending stalls at Mtapa market with city fathers failing to take action against them for fear of reprisals, The NewsHawks can report.

The companies missed last year’s deadline for the completion of the refurbishment and construction of new vending sites reportedly owing to logistical challenges.

After council realised that informal traders had mushroomed at a Covid-19 hotspot in Mtapa suburb, the city fathers decided to allocate some registered vendors a temporary workplace at the new Mtapa long-distance bus terminus while awaiting construction of vending sites at the rank.

But some ruling party activists have disregarded council procedures and allocated themselves space at the new vending site.

MDC Alliance Gweru mayor Josiah Makombe referred questions to council spokesperson Vimbai Chingwaramusee, who confirmed that some vendors had allocated themselves stalls although she said she was unaware of their political affiliation.

“How do you know they are Zanu PF youths? If it’s political, then unfortunately l cannot comment, you can get a comment from the political party spokespersons,” she said.

“As a local authority, we know some informal traders allocated themselves vending stalls. However, we encourage traders to follow the correct procedures whereby they are allocated stalls by the local authority.

“But we would not know which party they belong to. To us, they are informal traders, it is purely apolitical.”

“I’m hearing it for the first time, l will check and revert,” he said.

But at a Zanu PF meeting held in Gweru last month, Provincial Affairs minister Larry Mavima promised party youths they would get vending stalls as part of efforts to economically empower them.

The decision by ruling party youths to grab trading space comes at a time council faces headaches in accommodating more than 5 000 informal traders who are on the vending waiting list.

Makombe recently said work on the renovation of Kudzanai and Kombayi markets in the city as well as construction of new sites is expected to be completed this year.

He urged informal traders to be patient as the companies contracted by council were facing challenges in importing some building material from South Africa.