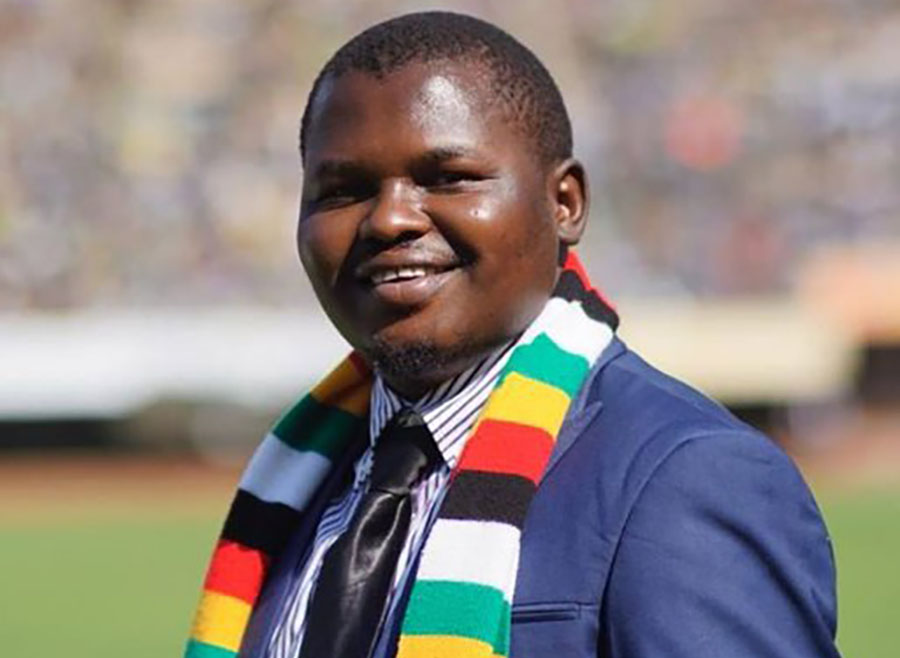 WHEN Zanu PF Director of Information Tafadzwa Mugwadi (pictured) — a militant motormouth and reckless political hack — a few days ago said he was going to seek permission from the ruling party authorities to drop a “bombshell” against South Africa’s governing ANC and SABC unless they reined in veteran journalist Sophie Mokoena on her reportage on Zimbabwe, we seemed poised for a massive and blockbuster political scandal.

It was like Zanu PF was holding all the aces. It had a “nuclear option” against the ANC as political tensions rise between the two uneasy bedfellows in the midst of an undeclared Cold War.

Soon after the 31 July 2020 mass stayaway, which was preceded by a sweeping repressive crackdown on civil society and political activists, as well as lawyers and journalists, among other dissenters, South African President Cyril Ramaphosa appointed two special envoys to visit Zimbabwe to try to pull the country out of its downward political and economic spiral, following criticism that Pretoria was neglecting the growing crisis on its doorstep.

But right from the beginning they were on a collison course: Ramaphosa expected his envoys not just to meet Mnangagwa, but also opposition and civil society leaders to understand what was happening in Zimbabwe.

By contrast, Mnangagwa said the envoys were coming to see him and nobody else. That inevitably led to clashes between Pretoria and Harare which exploded into a public spate in August last year.

Undaunted by Mnangagwa’s hostility  and unfazed by Zanu PF sensational attacks, Ramaphosa ploughed ahead and the following month sent an ANC delegation led by party secretary-seneral Elias Sekgobelo “Ace” Magashule to engage Zanu PF on the situation in Zimbabwe.

The meeting was held on 9-10 September 2020 at Zanu PF headquarters in Harare.

They also confronted the political and security situation in Zimbabwe.

They further tackled the crackdown that was going on, the economic crisis and the contagion of the situation and impact on South Africa — showing that they were dealing with a tragic crisis of leadership —which Nelson Mandela once referred to in a withering attack on the late former president Robert Mugabe – and governance failures spilling over from Zimbabwe into South Africa.

Differences soon emerged during the meeting, especially on the issue of Zimbabwean immigrants to South Africa triggered by Zimbabwe’s economic collapse.

Serious exchanges ensued during the meeting.

In the end, gulf between the parties was yawning: the ANC said it was an open and honest engagement on issues affecting Zimbabwe – in other words their hosts got the message, but Zanu PF emerged saying it was agreed that there is no crisis in the country.

As a result, clashing information and interpretation of the meeting subsequently followed.

It became clear the parties were now locked in a cold political war, undeclared as it was.

Three months down the line, Mugwadi, in a bid to blackmail the ANC and silence Mokoena, threatened to drop a “bombshell” against them.

But until now, journalists have been left wondering whether Mugwadi had a political blockbuster or a blockbluster.

So far his blockbuster has not yet materialised and it seems it might well deteriorate into a blockbluster – empty political bluster.

Zanu PF spokesman Simon Khaya Moyo yesterday said he was not aware of what Mugwadi was talking about it.

“I don’t know what he is talking about, but in any case we don’t address our issues through the media or social media,” Moyo said.

“We have laid down procedures of interaction with our sister parties and these must be strictly adhered to.”

Reckless utterances Mugwadi against Ramaphosa and the ANC, as well as on other issues, including on Mokoena, have divided senior ruling officials, a top Zanu PF official told The NewsHawks.

The official said Mugwadi is acting under the direction of party hawks like Chinamasa.

Chinamasa, who has been acting party spokesperson for a long time in the absence of Moyo, and his “young turks”, including Mugwadi, are attacking their opponents in Mnangagwa’s name.

The hardline wing is loyal to Mnangagwa; manifesting and reviving Mugabe’s political approach.

Even if Mnangagwa ousted Mugabe through a military coup in 2017, he has remained a true protégé in policy, actions and deeds, although without his master’s intelligence, ideological depth and exquisite rhetorical skills.

Sources say while Mugwadi has Chinamasa’s backing as they act on behalf of Mnangagwa, other senior party officials loyal to Vice-President Constantino Chiwenga are opposed to the approach of attacking Ramaphosa and the ANC.

The Chiwenga faction says it is bad Mugabeist politics that must stop forthwith.

Ex-Zapu officials, now senior Zanu PF leaders, are also infuriated by Mugwadi’s rantings against ANC, their ally during the struggle.

“These boys are reckless, we know who is sending, but it must stop. We can’t run a party like. We will talk to the President,” one official said.

“Zapu guys don’t like it, but they know that he has been sent. Chinamasa is behind it, they claim the President supports them,” a source said.

Moyo has said Mugwadi’s utterances on the ANC’s visit to Zimbabwe do not reflect the party’s position. He said Zanu PF and ANC enjoy fraternal relations, hence Mugwadi would be subjected to disciplinary proceedings.

When Chinamasa and Mugwadi fiercely attacked Ramaphosa and the ANC last year, bringing up all sorts of things, including Jacob Zuma’s Inkandla Scandal and the Marikana killings, in which the South African President was implicated but later cleared, Mpofu came out to clean up the mess. South African Finance minister Tito Mboweni this week joined the fray.

“I wish the President could just allow me nyana to tackle that turncoat @Tafadzwa Mugwadi,” Mboweni said on Twitter.

Mboweni described Mugwadi as a “turncoat”. Mugwadi defected from the MDC-T led by Morgan Tsvangirai as a student leader and joined Zanu PF, accusing the opposition of being ideologically bankrupt.

He has been rabid in his attacks on Zanu PF critics and the opposition.

The NewsHawks has established that the “bombshell” which Zanu PF is referring to is a claim that some ANC officials who visited Harare last September to discuss the local crisis had reportedly told their hosts the situation here was not as urgent as the need to oust Ramaphosa.

A senior Zanu PF official told The NewsHawks that a leading ANC delegation member had spoken tp them about the urgency of removing Ramaphosa before addressing the Zimbabwe crisis.

“A senior ANC delegation member told us that for him and others removing Ramaphosa is more urgent than addressing the Zimbabwe situation,” the Zanu PF official said.

Zanu PF officials say the ANC delegation was deeply divided along factional lines and some of them said on the sidelines that their main agenda is removing Ramaphosa, not dealing with Zimbabwe.

Since coming to power through the ANC Nasrec Conference in 2017 with a slim majority of 51.90% to his rival Nkosazana Dlamini-Zuma’s 48.10%, Ramaphosa has been battling to stem a rising factional tide publicly fronted by Magashule, a  key Jacob Zuma ally.

Zanu PF sources say the scandal that followed the ANC delegation flying to Harare using a South African National Defence Force air force jet was leaked by the senior Luthuli House official due to divisions among them.

The Zanu official said the ANC member had said they badly needed Zimbabwean support to isolate Ramaphosa in the region, while they oust him at home.

However, Ramaphosa has already called Mugwadi’s bluff and dared him to drop the bombshell.
Efforts to get comment from Magashule the whole week failed.

ANC spokesperson Pule Mabe did not answer calls and reply to messages.

Zulu said earlier tonight she was attending a community meeting and could not speak.