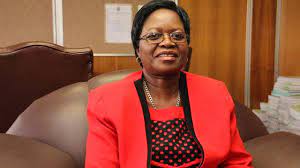 THE Zimbabwe Anti-Corruption Commission (Zacc) and the Zimbabwe Electoral Commission (Zec) continue to refuse to avail their financial assets for auditing, prompting Auditor-General Mildred Chiri (pictured) to compel Treasury to take action to ensure that the commissions comply with the law.

Zacc is tasked with combating graft while Zec is mandated with running credible, free and fair elections.

Their financial books however remain in a shambles despite being exposed again in Chiri’s 2020 audits.

In her latest report on the audit of Appropriation Accounts, Revenue and Finance Statements and Fund Accounts of Zimbabwe for the year ended 31 December 2021, Chiri said the Treasury Consolidated return submitted for audit by the two commissions did not include public financial assets for Zacc and Zec in clear contravention of section 32 (1) of the Public Finance Management Act [Chapter 22:19].

“Therefore, I could not ascertain the completeness of the Treasury Consolidated return.  The overall Public Financial Assets might be understated thereby misinforming decision makers. Treasury should enforce that all ministries, departments and commissions submit statutory returns in order to promote transparency and accountability,” Chiri said in her latest report.
The authorities confirmed that Zacc and Zec did not submit their statements of public financial assets to Treasury for consolidation purposes.

In a management response, the ministry of Finance confirmed engaging the two commissions to submit the required documents.

“In our submission of the consolidated return we indicated that these two Commissions had not submitted their returns. We have now requested them to make these submissions for the financial years 2017, 2018 and 2019. These returns will be taken into account and consolidated for full disclosure of Public Financial Assets,” the management’s response reads.

In her 2020 audit, Chiri also red flagged Zacc for failing to properly account for millions of United States dollars which could have been misappropriated as its accounting books have remained in a shambles for a decade — since 2012.

Chiri warned the risk of fraud and theft looms large at Zacc where public funds are spent without supporting documentation for payments for goods and services, and other substantial disbursements.

According to Chiri’s 2020 audit on state enterprises and parastatals, Zacc officials are spending state funds without transparency and accountability, with the commission’s books having been in a mess for 10 years.

Regarding reconciliations and cash payments, the Auditor-General’s report says Zacc had not prepared back reconciliation statements on time for periods under review as they were done in retrospect.

It says Chiri was not availed with vouchers that support cash payments, including fuel purchases, vehicle maintenance, and sub-contracting of services totalling US$1 116 548.
“The implication is financial loss due to material irregularities and fraud that may not be detected on time. Fraudulent activities may go undetected,” it says.

ln her 2020 audit report, Chiri said Zec and Zacc were found wanting by failing to submit their annual statements of account.

“Section 32 (1) of the Public Finance Management Act (Chapter 22:19) requires every director of finance to prepare and submit annual financial statements for audit,” the report reads.

“Contrary to the above-mentioned provision, as previously reported, the following commissions did not submit their statements of receipts and disbursements for the year ended December 31, 2019 for audit examination: Zacc, Zec and ZMC [Zimbabwe Media Commission].”

“Therefore, l could not satisfy myself whether or not public funds received by these commissions during the financial year under review were properly accounted for.”
There was no explanation from Zec as to why it failed to avail its books for audit. Zacc, for its part, said it had availed its books, but Chiri insisted that the books had not reached her office.

“I acknowledge the response from the management (that Zacc had presented its reports), however outstanding returns from the three commissions were still to be availed for audit examination at the time of concluding this audit,” the Auditor-General said.