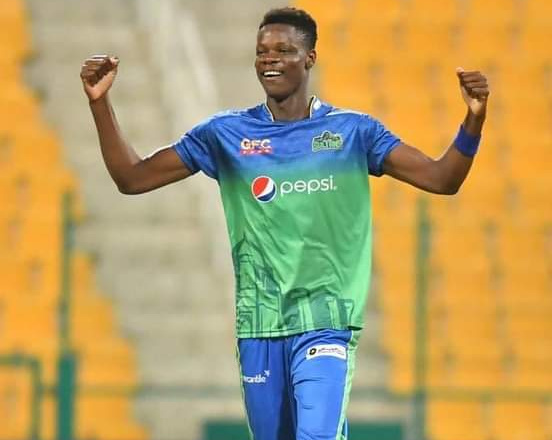 THE success of Zimbabwe fast bowler Blessing Muzarabani – who on Thursday added another feather in his cap by helping Multan Sultans win a maiden Pakistan Super League title – continues to be a great source of delight for mentor Winston Weekes.
ENOCK MUCHINJO
Multan beat Peshawar Zalmi by 47 runs in the final, providing a Zimbabwean flavour to the feat on two fronts.
Andy Flower, the greatest cricketer to emerge from Zimbabwe and a recent international Hall of Fame inductee, is Multan’s coach.
It is Muzarabani’s achievement that has particularly pleased Weekes, a British national of West Indian origin who has taken the tall seamer under his wing since 2017.
Weekes has been a central figure in Muzarabani’s rapid rise into a potent fast bowler. The London-based agent – who played and coached domestically in Zimbabwe in the 1980s – facilitated Muzarabani’s big breakthrough into the English county system when the 24-year-old pacer from Harare signed for Northamptonshire.
As predicted by Weekes three years ago, Muzarabani has returned from county cricket a more dangerous bowler, earning worldwide recognition for his eye-catching performances in the Zimbabwe team.
“You know, Zimbabwe is going through a lot, they need a hero,” Barbados-born Weekes told The NewsHawks after Sultan clinched the PSL title.
“And to see a boy who comes from nothing is a good story. You need to honour this young man. What you will be doing is giving the children hope, at least something to smile about.
“His pictures should all be on billboards in the high-density areas and say, ‘look at this guy, if you work hard, you can achieve what he has achieved’. You have to give people hope, because they will think that, ‘you know what, there is no hope’. So they need to see their own black brother doing well. That’s what it’s about. You can dream, dreams don’t hurt anyone.”
Muzarabani took two wickets at any economy rate of under seven in Thursday’s final, contributing to Multan’s remarkable turnaround following a slow start to the Twenty20 tournament.
Related Topics:
Up Next

We all do know who the real heroes are