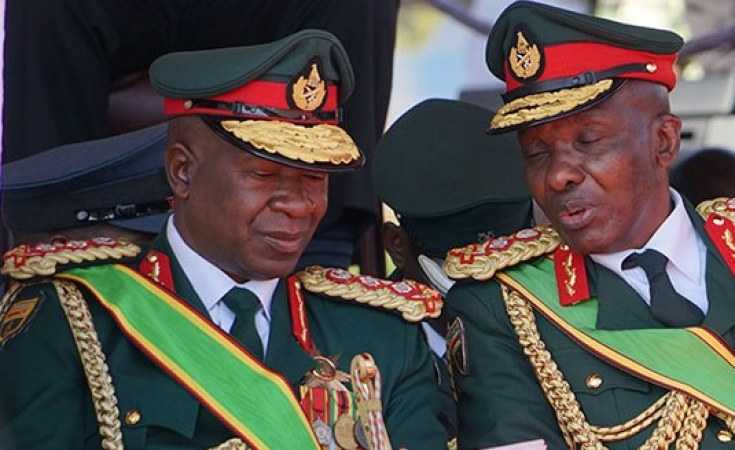 Chimonyo, who was re-assigned from the diplomatic service and appointed ZNA chief after the 2017 military coup which ousted long-time leader Robert Mugabe, was a dark horse. His appointment came as a surprise to many and critics viewed it as Mnangagwa’s coup-proofing strategy.

The age factor, experience and allegiances, according to insiders, will influence Mnangagwa’s appointment of the next army commander.

Following Mnangagwa’s takeover, there has been concern that the President has reserved key posts for people from only two provinces—Midlands and Masvingo— dominated by his ethnic Karanga tribe.

This, sources said, has unsettled some Zanu PF apparatchiks such as Mnangagwa’s deputy Constantino Chiwengwa, a retired military chief.

Another Midlander, Sibusiso Moyo, who was the face of the coup before being appointed Zimbabwe’s top diplomat, was also from the Midlands.

Chimonyo was from Masvingo province.

This week, The NewsHawks spoke to security sources and looked into the country’s laws to see whether or not Mnangagwa would spring another surprise.

Who are the big names?

Chimonyo’s appointment brought to the fore how Mnangagwa as Commander-in-Chief flexed his muscle by appointing a general who was not active instead of those who had played a leading role in wresting power from Mugabe.

Unlike previous army boss Constantino Chiwenga, who was ZNA chief before being appointed Zimbabwe Defence Forces commander following the death of Vitalis Zvinavashe, Chimonyo, whom insiders said had been close to Mnangagwa from the dark days of the Gukurahundi  genocide, was largely seen as a dark house.

“After being appointed ambassador by Mugabe, Chimonyo always wanted to identify himself as a soldier first then diplomat,” a source said. “Mnangagwa made sure that Chimonyo was brought back into the military.”

His ascendancy has heightened speculation that Mnangagwa, who is known for playing his cards close to his chest, may consider retired servicemen who are in diplomatic service.

Zimbabwe, according to official records, currently has three retired army generals who are serving in diplomatic service.

Another former high-ranking military man who was posted to diplomatic service until the time of his death was Douglas Nyikayaramba (Mozambique).

Nyikayaramba, who was retired in the army and was believed to be close to Mugabe after having served as election administration chief, died early this year due to Covid-19 complications.

In terms of army hierarchy, Katsande, who was elevated to the rank of colonel after retirement and Madzvamuse, exited the army at lower rank than their compatriots in diplomatic service.

Sanyatwe, sources said, was unlikely to bounce back into active service as he is widely seen as a close ally of Chiwenga.

The former commander of the Presidential Guard was briefly promoted to the rank of major-general before being retired and posted to Tanzania. His former unit together with the Mechanised Brigade which is stationed at Inkomo Garrison played a key role in pushing Mugabe out of power.

Another name which has also been tipped to become the next chief by sources who believe that Vice-President Chiwenga may influence the process is Lieutenant-General Engelbert Rugeje, the former Zanu PF political commissar who left military service before being retired and appointed to run the governing party’s commissariat.

The generals within Zimbabwe

Sigauke, during his days as commander of the Mechanised Brigade, was slapped with a travel ban to New Zealand. He is the current ZNA chief of staff (general staff).

He works closely with another former Mechanised Brigade commander, Major-General Paul Chima, who is the chief of staff in charge of administration. The other major-general, Hlanganani Dube, is in charge of the army’s quartermaster roles.

Sources further said if Mnangagwa were to promote a senior general from the ZDF to succeed Chimonyo, Major-General John Chris Mupande would be the ideal candidate as his appointment is more senior than the ZNA chiefs. The ZDF is made up of the ZNA and the Air Force of Zimbabwe.

The ZNA, which has a statutory strength of 40 000 active personnel, is however the primary branch of the ZDF responsible for land-oriented military operations. ZNA reserves claim another 21 800, putting the combined component strength total at about 51 800.

“Mupande, just like Sanyatwe and Rugeje, are viewed by those around Mnangagwa as close to Chiwengwa and this may minimise chances of their ascendancy. With the 2023 elections coming up, Mnangagwa would prefer a loyalist to fight from his corner. We may end up seeing the politics of clansmanship playing out,” a source said.

The age factor, sources said, will limit the chances of retired generals who are now mainly focusing on their business interests instead of politics.

What does constitution say about appointments?

The ZNA was formed in 1980 from elements of the Rhodesian Army, integrated to a greater extent with combatants from the Zimbabwe National Liberation Army (Zanla) and the Zimbabwe People’s Revolutionary Army (Zpra) guerrilla movements.

At Independence in 1980 and the cantonment of the Zanla and Zpra under Operation Midford, British Army trainers (the British Military Advisory Training Team, BMATT) coordinated the integration of guerrilla fighters into a unified army.