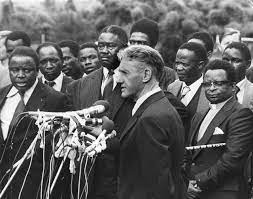 In a bid to shed light on the historically intertwined relations between South Africa and Zimbabwe, and their dynamics, particularly through the imperial perspective and active agent of colonial politics whose impact and influence had far-reaching consequences for the two countries individually and collectively, as well as through intersectionality, South African-based Zimbabwean Advocate Tererai Mafukidze focuses on the 1922 Rhodesian referendum and its implications.

A referendum on the status of Southern Rhodesia was held in the colony on 27 October 1922. Voters, almost all of them white, were given the options of establishing responsible government or joining the Union of South Africa. It changed the course of history.

Of course, Zimbabwe and South Africa’s relations had long earlier been shaped by other historical processes and interactions, including the Bantu migration, Mfecane and mass migration, and trade well before the colonialists arrived in the region. Colonialism brought a new dynamic and politics whose impact is still being felt up to this day.

ON 6 November 1922, the British South Africa Company (BSAC) was disappointed to learn that the majority of Rhodesians had chosen responsible government rather than become a province of South Africa.

Of the one million Africans living in Southern Rhodesia, only about 60 were on the voters’ roll in 1922. A total poll of 14 856 votes were cast in the referendum, while 93 were rejected.

The Africans, numbering 60 in total on the voters’ roll, had no realistic say in the matter. Of the 60 Africans on the voters’ roll, many were black South Africans who had come into Southern Rhodesia with the Pioneer Column and some in 1893 as wagon-drivers, servants, messengers and interpreters of the BSAC administration.

Some came as catechists/evangelists. They could be on the voters’ roll because they earned higher wages and had property which qualified them for the restricted franchise.

The rest of the one million blacks had no realistic opportunity of creating wealth or earning higher wages to qualify. As the European population grew, many Africans had been pushed away from skilled and semi-skilled jobs. They were now more required for menial low-paying work.

It was the official policy of the administration of the day to keep raising the qualification criteria as a means to limit to a bare minimum the chances of an African qualifying.

In a 1911 memo by the Attorney-General of the day, C. H. Tredgold he stated: “By denying the native the franchise you are merely damming back the stream which is bound to go on, and when the dam bursts the disaster will be overwhelming. Let the stream flow gradually while we can control it…My method of controlling the matter would be to raise the Franchise generally.”

Within the Legislative Council established in 1898 as some kind of representative body which had company and settler elective representatives there were several attempts to abolish the native vote altogether.

What prevented this was the spectre of the crown veto on such a move.

It is therefore some irony that black South Africans, few as African were on the voters’ roll, cast their votes in the 1922 referendum. The politics of the time show that blacks saw responsible government which came with crown veto powers on native affairs as a better of the two evils. They were quite terrified of joining the union and fall under the control of the Afrikaner majority in South Africa.  In the farming communities which had large Afrikaner populations it is believed half the union votes came from that section.

In February 1923, the British government announced that it would respect the outcome of the referendum and grant Responsible Government status to Southern Rhodesia.

On 1 October 1923, Southern Rhodesia was granted Responsible Government status. The British Government on the same day paid an agreed reduced settlement of BP3.75 million to the BSAC.

On 1 September 1923, the imperial authorities issued the Letters Patent to Southern Rhodesia.

For the next 40 years, Southern Rhodesia was not fully self-governing. The most important reservation for our discussion is a reservation in any law “whereby natives may be subject or made liable to any conditions, disabilities, or restrictions, to which persons of European descent are not also subjected or made liable” other than laws regulating the supply of arms, ammunition or liquor.

The enactment of the Land Apportionment Act proved to the African that the protection of the crown was a mirage.

In it lay the roots of the long African struggle for self-government in Zimbabwe.

In 1927, Winston Churchill is said to have remarked to Godfrey Huggins who would in future become the Prime Minister of Southern Rhodesia: “You had — how many did you say? — only 30 000 Europeans when I gave you your constitution; I still don’t know why I did it.”

Despite the rejection of the union, appeals from decisions of courts in Southern Rhodesia were heard by the Appellate Division of South Africa until the Federation of Rhodesia & Nyasaland was created in 1953.

Many other ties remain. There are many black South Africans who moved to Southern Rhodesia and made it their home. Some under deals with Rhodes and others as skilled workers, catechists and evangelists. Some bought land and have continued owning big farms in Zimbabwe for over 100 years.

In November 1965, Ian Smith’s Rhodesia Front declared its Unilateral Independence from Britain. This was built on the expectation of full self-government of whites created by the 1923 constitution. That declaration brought Rhodesia into a vicious war of liberation ending with attainment of majority rule and independence in 1980.

What would have happened to the course of the history of Southern Africa had the whites voted in favour of the Union with Southern Rhodesia becoming a fifth province of South Africa? Would we be having the debate about the porous borders and special exemption permits?

About the writer: Advocate Tererai Mafukidze is now a member of the Johannesburg Bar. He practises with Group One Sandown Chambers in Sandton, Johannesburg. His practice areas at the Bar are: general commercial law, competition law, human rights, administrative and constitutional law.

BOOK REVIEW: Why Africa must turn a new leaf

The liberation struggle on trial: Was Ian Smith better?