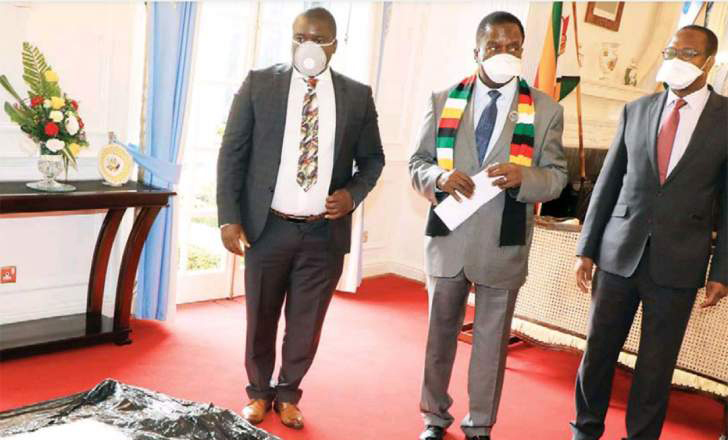 A stash of previously unpublished documents with fresh details obtained this week shows Nguwaya and his associates at Drax, also sometimes known as Drax International following its Dubai registration,  including its founder Ilir Dedja, have been frantically demanding that Treasury and police answer questions posed by the International Criminal Police Organisation (Interpol), which is investigating the issue, to unblock the transaction.

Zimbabwe’s Finance ministry and police have kept Drax at bay over the issue.

Drax, through its lawyers Samukange Hungwe Attorneys, has since early last year been writing a flurry of letters to police, Interpol Zimbabwe, Treasury, Ministry of Health, National Pharmaceutical Company of Zimbabwe (Natpharm) and the Office of the President and Cabinet demanding the US$2 million – but to no avail.

But the funds will not be released until the Interpol investigation is finalised.

The money was paid by Zimbabwe’s Finance ministry on 2 March 2020 and it got into Drax’s new account three days later – on 5 March. Drax had an office in Budapest before it hastily retreated amid a subsequent Interpol investigation.

Drax, which also had offices in Switzerland, opened the Hungary account to receive the money to avoid scrutiny, particularly the spectre of United States targeted sanctions on Zimbabwe.

Dedja is the only shareholder in the Swiss-registered  Drax and another company called 3-DD Swiss Trading. He registered Drax in the Italian-speaking town of Lugano on March 2017, but the company has done little trading in Switzerland.

This was five days after Drax had signed a deal – Contract N0. International NAT DP 19/2019 and 20/2019 – with Natpharm for the supply of medicines and medical sundries worth US$20 million.

Drax later signed a US$40 million deal with Natpharm bringing the total to US$60 million.

Within 10 days of registering its Hungary branch, Drax was paid US$2 million by government.

However, the funds were red-flagged by banks involved in the relevant financial integration system chain for suspected money laundering. Then Interpol moved in.

In its contract with Natpharm, Drax gave N0. 6900, Lugano, Switzerland, as its address, while Natpharm put its 14 Lobengula Road, Southerton, Harare – headquarters – as its location.

The deal, which sailed through the Health ministry, Treasury and the Procurement Regulatory Authority of Zimbabwe with ease due to political pressure despite lingering questions and suspicions, was structured as a loan facility.

Suspicions were raised due to Nguwaya’s close association with the Mnangagwa family and his numerous public appearances with the President, his wife Auxillia and their twin sons, Colin and Sean. Nguwaya is particularly close to Sean, a Captain in the Zimbabwe National National Army who is attached to the Presidential Guards,  and works with him.

The deal followed an expression of interest by Drax to government through Natpharm, which is a state-owned enterprise, in 2019.

Through the loan facility, Drax supplied goods in advance and was paid later at agreed prices and margins.

Documents obtained by The NewsHawks show new details of the money trail.

The funds were paid by the Finance ministry located at the New Government Complex (now officially known as Mgandane Dlodlo Building) at Central Avenue or Samora Machel and 4th Street (Simon Muzenda) in Harare through the RBZ, into BancANC.

The transaction was initiated in Harare on 2 March 2020 at 16:43pm. The money would go through Germany bank Deutsche Bank Trust Company Americas’ New York subsidiary, a leading provider of financial services in the Americas. It then went to Erste Group Bank AG before landing into Drax’s MagNet Bank account where it was frozen.

Documents show Nguwaya and his business partners have been piling pressure on government and police to complete the transaction, and get the money.

After the contract between Natpharm and Drax was signed on 11 December 2019, the latter quickly moved to bring in supplies. In the first two months of last year, Drax had delivered goods worth US$2 733 480.

This is contained in a letter, dated 10 April 2020, written by Dedja to Natpharm.

The letter says Drax had prepared goods worth US$4 million which were ready for delivery and more payment.

“RE:  UPDATE ON THE CURRENT SITUATION OF PRODUCTS PURCHASED UNDER TENDER WITH REFERENCE NUMBER: INTERNATIONAL NAT DP 19/2019 AND 20/2019,” Dedja’s letter says.

“Reference is made to the current situation of products to be supplied under contract with Reference Number: International NAT DP 19/2019 and 20/2019 which we are summarising as follows:

Ever since the US$2 million was paid investigations had been going on. However, progress has been stalled by authorities.

In a letter, dated 2 June 2021, to police commissioner-general Godwin Matanga, Drax lawyers demanded that local cops answer questions posed by Interpol in April last year so that the funds can be unblocked.

“We refer to the matter above and the meeting of 2nd of June 2021 held at your esteemed offices. We act for and on behalf of Drax Consult SAGL,” Tafadzwa Charles Hungwe, Samukange Hungwe managing partner, writes.

“The purpose of the meeting was to follow up on the request made by Interpol on 29 April 2020 with regards to the contract signed by our client and the National Pharmaceutical company of Zimbabwe (Natpharm). The request has been availed to us and seeks clarification on the following issues; –

“The information referred to above is required by Interpol in order to clarify the payment made by the Government of Zimbabwe through the Ministry of Finance and Economic Development on 2nd of March in respect of the contract under NAT DP 19/2019 and 20/2019.

“Our instructions are to request that the response to the request be processed as the money paid to our clients remains frozen for the last 15 months.”

CID said Interpol is prohibited from sharing information with third parties as it is a police-to-police working arrangement.

Prior to that Drax had also written to Interpol Harare. In a letter, dated 6 October 2020, addressed to Commissioner Grace Ndou, Hungwe made similar demands in a bid to clear the US$2 million blocked funds.

Drax also wrote to Finance permanent secretary George Guvamatanga on 28 August 2020, demanding the money. Guvamatanga paid the US$2 million upon a request for the payment from the Health ministry then under the subsequently dismissed minister Obadiah Moyo.

In response to Drax, Guvamatanga said Hungwe should go and get information about the Natpharm registration from the Registrar of Companies, not him. On whether Drax had actually delivered the medicines and medical sundries it promised, he said only Natpharm would have the proof of delivery documents.

Guvamatanga only answered one question. He said Treasury paid the US$2 million upon a request to do so by the Health ministry. He refused to play ball on the other issues.

Prior to this, Interpol had written a letter to local police on 29 April 2020, as it initiated the investigation.

“These companies (Natpharm and Drax) may be linked to other companies that have been subjects of a criminal investigation,” Interpol’s Budapest office wrote in a letter to local police, beginning the probe into the US$2 million saga.

Nguwayo refused to comment. “Talk to my lawyers about that,” he said. “I’m not in a position to talk to the media as this is now being handled by my attorneys.”

Efforts to get comment from the police, Interpol and government officials were unsuccessful at the time of writing.