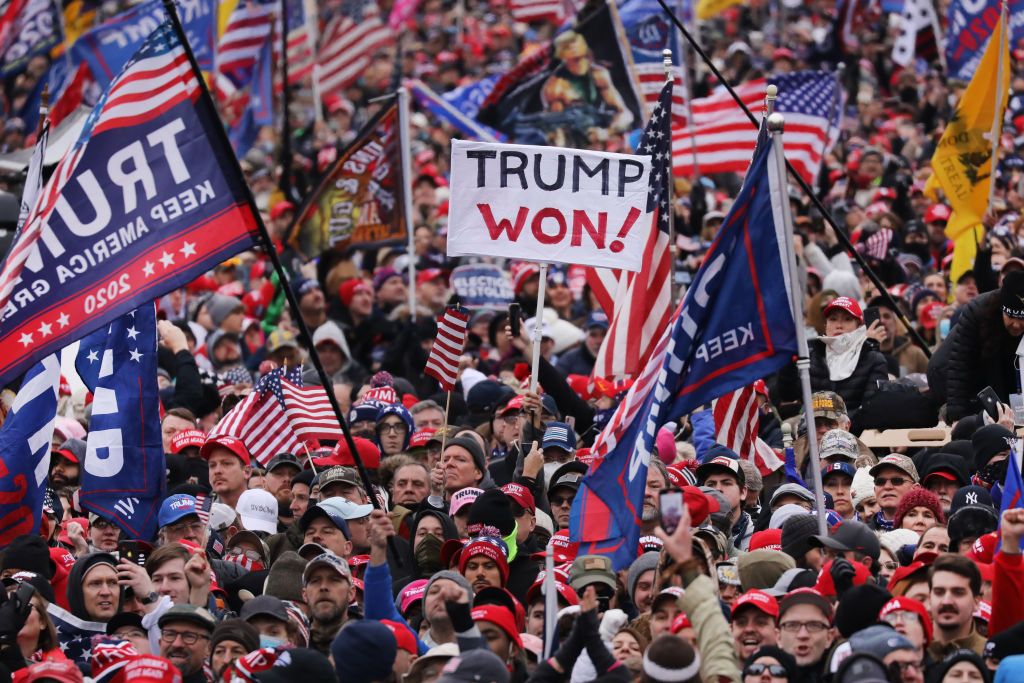 WASHINGTON, DC - JANUARY 06: Crowds arrive for the "Stop the Steal" rally on January 06, 2021 in Washington, DC. Trump supporters gathered in the nation's capital today to protest the ratification of President-elect Joe Biden's Electoral College victory over President Trump in the 2020 election. (Photo by Spencer Platt/Getty Images)

AMERICAN elections – which usually grab world attention – have come and gone. Most people around the world follow the United States elections for their political, geopolitical and policy implications.
Some, of course, find them entertaining due to their Hollywood-style campaigns.

The US is the world’s sole superpower. Some, especially in the Global South, call it the Empire, with connotations of aggression, domination and exploitation.

Historically though the US was a huge anti-imperial project in modernity. It emerged in opposition to the British empire, overthrowing the monarchy.

Despite many flaws of its society and governance system, the US positions itself as the beacon of democracy; a democratic torchbearer. It is the biggest economy in the world.

That, combined with its military power, means the impact of its policies on the world are significant and far-reaching. The US has tentacles all over the globe. Its foreign policy and impact is always hotly debated.

US elections are also like a live reality show – they can be hugely entertaining.

While the elections themselves are over, their dramatic impact and consequences are still with us. And that will remain so for a long time to come.

The first thing is that the US showed the world the dangers of having a megalomaniac in power. A dangerous demagogue, who did not hesitate to lie, demonise, promote racism and hate, peddle conspiracy theories and abuse power to advance his warped agenda; supported by fanatics who are like flies that follow the corpse to the grave.

Donald Trump, who desperately hung onto power by his fingernails, even went to the extent of inciting his stormtroopers to storm the Capitol Hill to stop congress from confirming President-Elect Joe Biden, showing the world the dark underbelly of American politics. He was even prepared for a doomed coup by a mob.

Second, Trump’s rule demonstrated authoritarianism, powered by Hitlerite populism, can emerge anywhere in the world. Not many would have imagined the US appearing like a Third World country during elections. Even by standards of dictatorial nations, the conduct of Trump’s supporters was a new low.

“Trump’s attempt to overturn the election, and his pressure tactics to that end with Brad Raffensperger, the Georgia secretary of state, are an example of how authoritarianism works in the 21st century,” said Ruth Ben-Ghiat, author of Strongmen: From Mussolini to the Present.

“Today’s leaders come in through elections and then manipulate elections to stay in office — until they get enough power to force the hand of legislative bodies to keep them there indefinitely, as (Vladmir) Putin and (Viktor) Orban have done.”

When Steven Levitsky and Daniel Ziblatt published How Democracies Die, in 2018, warning the US could slide into autocracy, they got a serious backlash.

“We were criticised by some as alarmist,” Ziblatt, a professor at Harvard University, said. “It turns out we weren’t alarmist enough.”

In the end, this should not have come as a surprise to anyone who watched and followed Trump over the past four years. He foreshadowed his plans to challenge the election as invalid unless he won.

Third, the election exposed flaws of the US electoral system. Lessons can be drawn from that.
Fourth, the chaos and rioting – leaving four dead – compromised the US’s ability to speak out on polls in other countries.

As British professor Nic Cheeseman said: “This weakens the moral authority of the US to speak out on other countries’ elections and that will embolden dictators around the world”.

Fifth, which is the biggest lesson, especially for Zimbabwe and other African countries, it is important to have strong democratic institutions that will not be manipulated or abused by dictators when they lose power. Trump tried and failed to cling onto power due to resilient institutions.

As Biden said, democratic institutions saved and steered the US through “one of the darkest days in the history of our nation”.

This is what Zimbabwe and other African nations, indeed authoritarian states elsewhere, need: entrenched, strong democratic institutions to limit power and contain power-mongering dictators, especially when they lose elections.

Where institutions are solid – not fragile, no one can use the electoral commission, public service, police, intelligence services, and the army to help them to rig and steal elections, overturn the people’s will or hang onto power by hook or crook.

This must be the biggest takeaway from the US elections for Zimbabwe, which badly needs democratic reform to hold credible, free and fair elections, hopefully leading to change for the better – not more of the same.

The fog will soon clear

Lockdown not the Covid-19 solution