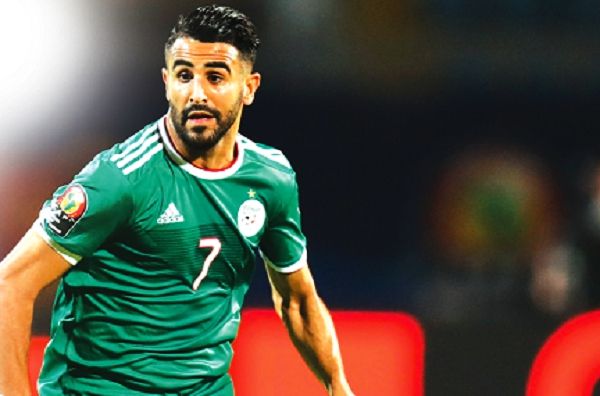 CAPTAIN Riyad Mahrez provided an assist and scored a goal to help the in-form African champions Algeria beat Zimbabwe 3-1 in an Africa Cup of Nations qualifier in Algiers last night.

With that win, the Algerians have extended their impressive unbeaten streak to 21 games, as well as a 100% record in Group H of the current Nations Cup qualification competition.

Although Zimbabwe on occasion were able to resist the hosts’ consistent forays into their half, Algeria were a potent attacking force, a side that many an opponent has struggled to contain over the past couple of years when the Desert Foxes turn on the style.

After wearing down Zimbabwe with their neat passing game, Algeria striker Baghdad Bounedjah slotted home on 31 minutes when the visitors’ error-prone goalkeeper Elvis Chipezeze, reacting to a shot from outside the box by Galatasaray midfielder Sofiane Feghouli, could only punch back into the path of the scorer.

Feghouli himself would add his name on the scoresheet 12 minutes later. It came after some slick footwork by Manchester City star winger Mahrez, who teased a marker on the right before finding the unmarked Feghouli, whose diving header nestled into the far corner.

Mahrez then all but assured his team of maximum points when he eased past three defenders after the Zimbabweans fluffed their lines, chipping the Warriors’ replacement goalkeeper Talbert Shumba on 65 minutes.
Zimbabwe grabbed a face-saver after 75 minutes courtesy of Lyon forward Tino Kadewere’ cheeky chip over Algeria goalkeeper Rais M’Bolhi.

In-form Kadewere, fresh from scoring a brace in Lyon’s comeback 2-1 win over St Etienne at the weekend, earlier in the match had a chance to put Zimbabwe in front after 16 minutes when he was left unmarked, only to direct his header over.

The two teams will meet in the reverse fixture in Harare on Monday.

Meanwhile, Zambia came from behind in the other Group H tie to beat pool minnows Botswana 2-1 in Lusaka yesterday.

Tumisang Orebonye’s header in the 45th minute had given Botswana a shock lead before Enock Mwape and Collins Sikombe secured the win for Chipolopolo in the second half.

HawkZone: As one protégé exists and another arrives, mentor Steve languishes in oblivion

I thrive on games like these, says star Warriors defender